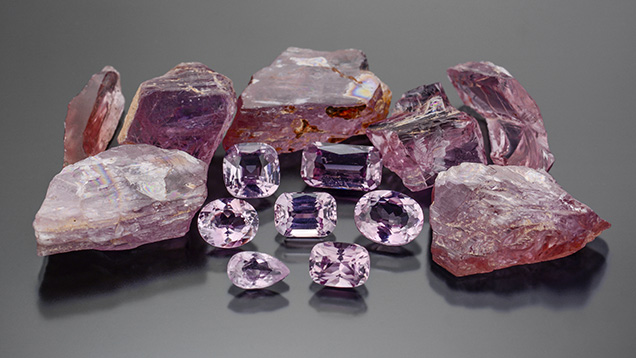 Figure 1. This purplish pink diaspore is reportedly from a new deposit in Afghanistan, discovered in February 2020. The faceted stones weigh 0.57 to 1.60 ct; courtesy of Donald Hofler. The rough stones range from 4.15 to 17.52 ct; courtesy of Salman Khan. Photo by Diego Sanchez.

Diaspore, an orthorhombic aluminum oxide hydroxide mineral with the formula AlO(OH), is a relative newcomer to the jewelry scene, with some stones possessing a captivating ability to change color between pale green, yellow, pink, and purple when viewed in different sources of light (C. Shen and R. Lu, “The color origin of gem diaspore: Correlation to corundum,” Winter 2018 G&G, pp. 394–403). Here we document a new find of purplish pink gem diaspore reportedly from Nangarhar Province, Afghanistan (figure 1).

Previously, transparent crystals of diaspore in sizes suitable for jewelry purposes were only recovered from mining operations on Ilbir Mountain near the village of Pinarcik, Milas District, Muğla Province, Turkey (M. Hatipoğlu and S. Chamberlain, “A gem diaspore occurrence near Pinarcik, Mugla, Turkey,” Rocks & Minerals, Vol. 86, No. 3, pp. 242–249). Gem diaspore from Turkey has been reported since the late 1970s (K. Scarratt, “Faceted diaspore,” Journal of Gemmology, Vol. 17, No. 3, 1980, pp. 145–148), but it was not until commercial mining began in 2005 that a consistent supply became available and was subsequently marketed under various trade names including Zultanite and Csarite (S. Kotlowski and L. Rosen, “A short history of diaspore and its trade names Zultanite and Csarite,” International Gem Society, www.gemsociety.org/article/short-history-diaspore-trade-names-zultanite-csarite). Additionally, alluvial deposits in Myanmar near Mong Hsu have yielded limited amounts of chromium-colored gem-quality crystals in small sizes since 2004 (U Hla Kyi and K.K. Win, “A new deposit of gem quality colour-change diaspore from Möng Hsu, Myanmar,” Australian Gemmologist, Vol. 22, No. 4, pp. 169–170).

Dealers Salman Khan (ARSAA Gems & Minerals) and Noshad (Noshad Gems Enterprises), both based in Peshawar, Pakistan, reported that in March 2020, a purplish pink diaspore from a new deposit had reached the gem market. The new material was reportedly coming from the Goshta district of Nangarhar Province near the village of Ragha. The authors obtained several samples from Salman Khan and Donald Hofler, a gem dealer in Texas, to perform gemological and advanced testing to characterize this material. These samples would be classified as F-type samples (collected in the international market) according to the classification scheme used by GIA’s field gemology department (W. Vertriest et al., “Field gemology: Building a research collection and understanding the development of gem deposits,” Winter 2019 G&G, pp. 490–511). It was also reported by the Peshawar-based dealers that preliminary experiments with gamma irradiation resulted in samples becoming an undesirable dark brownish orange color, but this was not tested further by the authors. 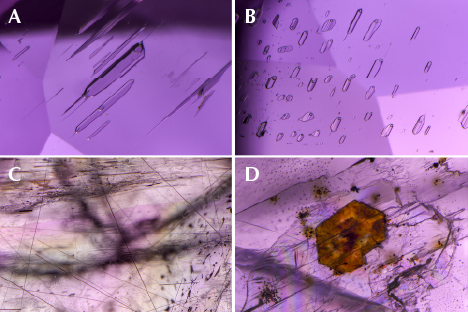 Microscopic examination showed that the dominant type of micro feature in the material is fluid inclusions, typically consisting of a gas bubble, liquid, and occasionally a solid phase. Fine curved black rutile needles were also observed in two of the samples (confirmed by Raman analysis), while one diaspore crystal contained a brown hexagonal crystal that the authors were unable to identify (figure 2). Brown epigenetic staining and cleavage cracks were observed in several samples. Strong doubling from birefringence was also characteristic of the material.

Gemological testing revealed a biaxial positive mineral with refractive indices of nα = 1.700, nβ = 1.721, and ng = 1.749, and a specific gravity of 3.38. The maximum birefringence observed was 0.049. Examination with a dichroscope showed three distinct pleochroic colors, consistent with a biaxial mineral: dark purplish pink, pale yellow, and pale pink. The diaspore showed a very weak red fluorescence under long-wave ultraviolet light and an irregular chalky yellow fluorescence reaction under short-wave UV. When the samples were examined with daylight-equivalent illumination and compared to incandescent illumination, a slight color shift was observed. The samples appeared less purplish, going from purplish pink in daylight-equivalent lighting to a nearly pure pink hue in incandescent lighting, but no distinct color change of the dominant hue was observed in the faceted samples.

Figure 3. UV-Vis-NIR spectra were collected from an optically oriented sample to resolve the alpha, beta, and gamma vibrational directions in the Afghan diaspore. All three spectra showed a broad absorption band centered between 560 and 580 nm resulting primarily from vanadium and chromium. In this sample, the average concentrations were 57 ppma vanadium, 20 ppma chromium, 205 ppma iron, and 84 ppma titanium.

Advanced spectroscopic instrumentation was used to further characterize the new diaspore material. One sample was optically oriented into a polished cube with parallel faces polished perpendicular to the crystallographic axes (T. Thomas et al., “Device and method of optically orienting biaxial crystals for sample preparation,” Review of Scientific Instruments, Vol. 85, No. 9, 2014, 093105). The ultraviolet/visible/near-infrared (UV-Vis-NIR) absorption spectra of the polished cube revealed broad absorption bands centered in the range of 560 and 580 nm for alpha, beta, and gamma polarizations (figure 3). Under daylight-equivalent lighting, the saturated purple-pink color was consistent with the alpha vibration direction, pale greenish yellow for the beta direction, and light purplish pink for the gamma direction. Under incandescent light, the pleochroic colors were saturated purple-pink for the alpha color, orange-pink for the beta color, and light pink for the gamma color. Color swatches were calculated using the measured spectra to produce a representative color for each pleochroic color and also to show how the colors mix relative to their crystallographic axes (figure 4).

Figure 4. One diaspore sample was fabricated into a crystallographically oriented block in order to measure the polarized spectra, which were used to analyze the color. This figure shows the relationship of the polarized spectra measured parallel to each crystal axis and the resulting colors produced when the polarized spectra are mixed together under daylight (top) and incandescent (bottom) conditions, which is what the viewer would observe using unpolarized light transmitted through the sample normalized to a 1 cm path length. Under daylight-equivalent lighting, the alpha color was saturated purple-pink, the beta color was light greenish yellow, and the gamma color was light pink. Under incandescent light, the alpha color was a saturated purple-pink, the beta color was orange-pink, and the gamma color was light pink. The acute 2V angle, or angle between the two optic axes, was measured as 85° in this sample. Both axes lie in the optic plane that is perpendicular to the b crystal axis.

Observations under the microscope showed the cleavage direction in the faceted stones to be nearly parallel to the table (it is inclined slightly, presumably to avoid cleaving when polishing the table facet). This orientation places the b-axis approximately perpendicular to the table facet, which will facilitate the best color face-up, composed primarily of a mixture of the alpha and gamma rays.

Figure 5. The purplish pink gem material from Afghanistan showed a Raman spectrum (left) that matched diaspore, with a dominant peak at 449 cm–1 and smaller peaks at 334, 500, and 669 cm–1. Its FTIR spectrum (right) was consistent with diaspore, with absorption features at approximately 2115 and 1990 cm–1 and broad absorption bands at approximately 4080 and 3000 cm–1.

Raman analysis confirmed the material’s identity as diaspore (figure 5, left). Fourier-transform infrared (FTIR) spectroscopy showed absorption features at approximately 2115 and 1990 cm–1 and broad absorption bands at approximately 4080 and 3000 cm–1, all of which are consistent with diaspore (figure 5, right). Chemical analysis of seven samples showed a bulk composition consistent with that of diaspore, and average notable trace element concentrations showed 27 ppma chromium (ranging from 14 to 48 ppma), 31 ppma vanadium (from 14 to 59 ppma), 213 ppma titanium (from 67 to 428 ppma), and 252 ppma iron (from 137 to 350 ppma).

This exciting discovery of purplish pink diaspore from Afghanistan may prove to be a significant new deposit. While production volume is currently unknown, several kilograms of material have been reported and large faceted stones of nearly 50 ct have been described on social media (Mark Smith, @thailankagems). The color of this diaspore can be attributed mainly to trace element concentrations of chromium and vanadium. The concentrations of these elements are generally different from those in Turkish diaspore, which has significantly lower vanadium, and those in Burmese material, which generally has much higher chromium. This new attractive color of gem-quality diaspore will certainly be a welcome addition to the gem trade.

Ian Nicastro is manager of Pasquinelli Lab at University of California San Diego. Wim Vertriest is supervisor of field gemology at GIA in Bangkok. Nathan Renfro is manager of colored stone identification, Ziyin Sun is research associate, Aaron Palke is senior manager of research, and Paul Mattlin is manager of distance education, at GIA in Carlsbad, California.

The Color Origin of Gem Diaspore: Correlation to Corundum

Examines the color origin of color-change diaspore, known commercially as Zultanite, and compare the effectiveness of the chromophores it shares in common with corundum.