Tanzanite, the blue to violet transparent variety of the mineral zoisite, was discovered in Tanzania around 1967. Since tanzanite seldom contains significant inclusions, the authors were surprised to examine a tanzanite cabochon that contained myriad dense whisker-like inclusions. The whiskers were cylindrical in shape, typically gently curved along their length, and displayed a metallic luster. At first glance, the whiskers were interpreted to be composed of graphite, as it is one of the more common opaque black mineral inclusions found in tanzanite. However, the elongate, curvilinear morphology suggested they were likely something else.

Merelaniite, a new molybdenum-essential member of the cylindrite group, was recently identified by coauthor JAJ and colleagues and approved in 2016 by the Commission of New Minerals, Nomenclature and Classification (CNMNC) of the International Mineralogical Association (IMA). The new mineral is sporadically found in specimens from the tanzanite mines near Merelani, Tanzania. It can be associated with a wide variety of minerals from the Merelani mines and has also been noted as being enclosed in calcite, quartz, chabazite, fluorapatite, prehnite, and zoisite. All the specimens identified so far have been obtained from secondary mineral markets, and the exact geo­logical location of any specimen known to contain merelaniite is so far undocumented and unknown. Merelaniite occurs individually and in clusters as dark gray metallic whiskers of circular cross-section. The whiskers are composed of crystal lamellae that are tightly rolled in a “scroll-like” manner similar in appearance to the related mineral cylindrite (J.A. Jaszczak et al., “Merelaniite, Mo4Pb4VSbS15, a new molybdenum-essential member of the cylindrite group, from the Merelani tanzanite deposit, Lelatema Mountains, Manyara region, Tanzania,” Minerals, 2016, Vol. 6, No. 4, 115).

This tanzanite cabochon sample revealed similar whisker-like inclusions accompanied by growth blockages, dark platy crystals, and fractures. The whiskers varied in diameter and length, and tended to branch out intermittently. The length was generally over a millimeter (figure 1). Growth blockages were fluid filled and also contained dark solids (figure 2). The presence of intact liquid inclusions was a strong indicator that this tanzanite had not undergone heat treatment. Small granular crystals were observed in between fractures associated with the whisker inclusions. Raman spectroscopy confirmed these opaque whisker-like inclusions to be merelaniite, and platelets that were associated with the whiskers might be unwound layers of merelaniite. 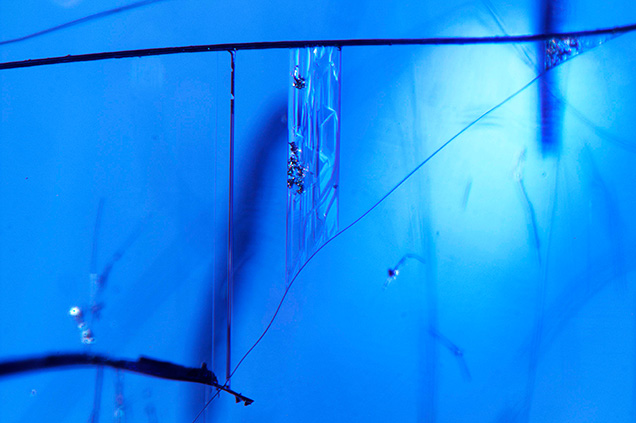 Figure 2. A growth blockage results from the suspension of zoisite growth when the crystal is interrupted by a foreign body. In this case, the foreign body is a merelaniite whisker. Photomicrograph by Tyler Smith; field of view 1.99 mm.

Coincidentally, two unusual specimens of tanzanite crystals containing merelaniite whiskers were found by one of the coauthors (JAJ) among a gem and mineral dealer’s stock at one of the mineral shows held in Tucson, Arizona, in February 2018. Also relatively unusual is that these crystals were still on matrix composed primarily of calcite and graphite (figure 3).

The occurrence of merelaniite in tanzanite is very rare. This is the first time GIA has identified this new mineral in gem-quality tanzanite.

Augusto Castillo and Tyler Smith are staff gemologists at GIA in New York. John A. Jaszczak is a professor of physics at Michigan Technological University in Houghton, Michigan.