Early in 2016, gem merchant Abdul Hafiz (Jaipur, India) showed this contributor a parcel of orangy brown rough hessonite he had purchased, said to be “glass-filled” hessonite. Upon initial observation, the specimens appeared to be treated, as individual crystals were stuck together (figure 1). This is commonly seen in glass-filled corundum rough; however, the typical glassy surface was absent. Rather, the surface appeared greasy, as if it was heavily oiled. Since the crystals were stuck together, it was obvious that some more stable form of treatment has been performed. Further testing was conducted to identify the treatment.

Under 10× magnification, the joints and cavities showed a concentration of a foreign substance that was readily indented with a metal pin, ruling out the presence of glass. Because of the unpolished surface, we could not see the  filler, but the stone was transparent enough for infrared spectroscopy. The spectra showed strong features at approximately 3060, 3032, 2923, and 2871 cm–1; these peaks are associated with polymer. Other absorption features were consistent with grossular garnet, specifically hessonite and tsavorite, according to the laboratory’s database.

To check for a polymer filler and record gemological properties, two specimens were faceted, weighing 5.35 and 5.31 ct, respectively (again, see figure 1). Both specimens gave an RI of 1.745 and a hydrostatic SG of 3.60, within the range for hessonite (M. O’Donoghue, Gems: Their Sources, Descriptions and Identification, 6th ed. Butterworth-Heinemann, London, 2006). Both displayed a strong roiled or “heat wave” effect and numerous transparent rounded to elongated colorless crystals, features consistent with hessonite. The stones had obvious fractures visible to the unaided eye. When magnified, these fractures displayed thick and cloudy patches (figure 2), suggesting that a foreign substance was used to create an uneven filling. None of the iridescence or color flashes typically associated with a filled fracture were visible. Both faceted stones also displayed characteristic polymer-related peaks in IR spectroscopy. 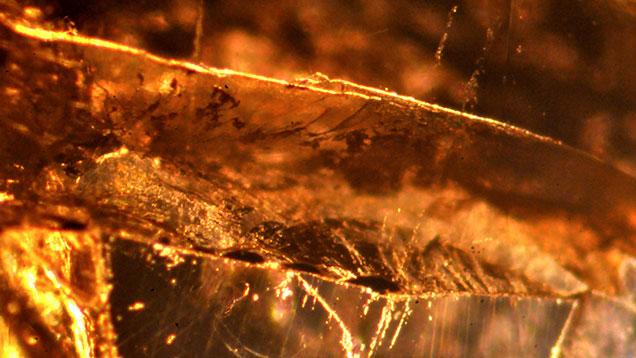 This was our first encounter with a polymer-treated hessonite. Because the fractures were eye-visible, it is unclear how much value the treatment adds to these low-grade stones. According to Mr. Hafiz, the treatment is performed to stabilize the rough for cutting and polishing; otherwise the highly fractured material crumbles while processing. He added that hundreds of kilograms of such rough (reportedly African) have been sent to China for treatment.

Gagan Choudhary (gagan@gjepcindia.com) is the deputy director at the Gem Testing Laboratory in Jaipur.