With high prices and demand from Chinese consumers for jadeite jade (or fei cui), correctly identifying samples is a major challenge for gemological laboratories. Jadeite’s complex mineral composition and its nature as a rock rather than a mineral further complicate this problem. While jadeite is the main mineral in jadeite jade, other pyroxene minerals such as kosmochlor, omphacite, amphibole-group minerals, plagioclase (especially albite), and even some iron oxides may also be present. Recently, the National Gold & Diamond Testing Center (NGDTC) lab tested 29 bangles submitted as jadeite jade (figure 1). The results again raised the issue of nomenclature.

The samples could be separated into two groups, one group with finer texture and color (shown on the left in figure 1). Standard gemological tests were applied to all of the samples, and the surface features were observed using a standard gemological microscope. The samples showed the characteristic 437 nm line with a handheld spectroscope. Ten randomly chosen spot RI readings were recorded on each bangle, and the results offered interesting insights. Two different readings of 1.52 and 1.66 were observed, indicating the presence of two major components. The SG ranged from 2.99 to 3.34, while the referenced SG for jadeite jade is 3.34 (+0.06–0.09). The low SG indicates a significant amount of light minerals in these samples. Another observation was that the group of lesser luster and color (shown on the right in figure 1) tended to have lower SG than the higher-quality samples. Overall, most of the samples were inert to UV, though six showed weak to moderate unevenly distributed bluish fluorescence. Under 30× magnification and brightfield illumination, two major mineral groups with contrasting color, crystal shape, and luster were revealed (figure 2). 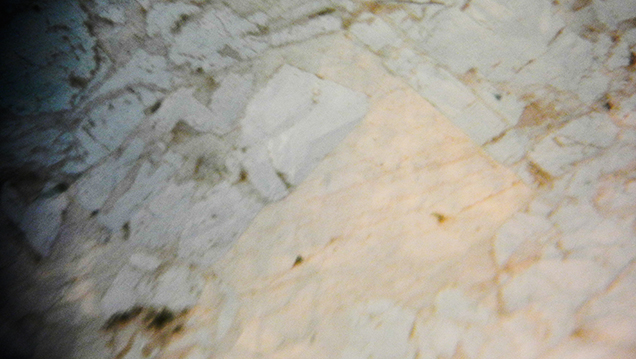 Figure 2. Two groups of minerals were observed on the surface of this sample under brightfield illumination. One group is composed of the pale whitish subhedral to euhedral grains, the other of the creamy minerals in between. Photomicrograph by Li Jianjun; magnified 30×.

Transmission infrared spectra collected from the positions that fluoresced weakly to moderately showed no polymer-related features. To confirm the composition of the two major minerals, we collected micro-infrared reflectance spectra from them (figure 3). The spectrum of the pale whitish mineral indicated jadeite, with the presence of the featured 1050 and 744 cm–1 bands in addition to the four bands between 400 and 600 cm–1. The IR spectrum of the creamy mineral matched that of albite, with the characteristic peak at 1040 cm–1 band assigned to the Si-O stretching vibration in the SiO4 tetrahedral structure. The multiple peaks in the 800–700 cm–1 region can also help to distinguish albite from jadeite.

Figure 3. IR reflectance spectra collected from the two main minerals in the samples identified one as jadeite and the other one as albite.

The spot RI readings around 1.52 were consistent with albite’s published RI of 1.528–1.542. The SG of albite is 2.60–2.65, considerably lower than that of jadeite. The presence of albite as a major mineral component in this material could account for the much lower SG in most of the samples. Although albite is one of the common minerals in jadeite jade, the amount is usually very minor and cannot be easily detected by standard gemological tests. Because the lab could not destroy the samples, no quantitative data were achieved.

Identifying these materials is not easy, especially when the concentration of certain components cannot be quantitatively determined and there is no trade standard on the boundaries for the different varieties. This study serves as a reminder that in addition to the omphacite issue, the high concentration of albite in some goods is a potential problem facing laboratories. To better protect consumers, the NGDTC recommends a clear statement regarding the presence of albite on laboratory reports once the albite is identified by the standard gemological test especially according to refractive index, even by the FTIR spectrometer.

Li Jianjun (geoli@vip.sina.com) is the technical supervisor on gemology of the National Gold & Diamond Testing Center (NGDTC) in the People’s Republic of China, and the senior engineer in the Shandong Provincial Key Laboratory of Metrology and Measurement, Shandong Institute of Metrology. Luo Yuanfei is a graduate student majoring in gemology, and Yu Xiaoyan is a professor, at the School of Gemology, China University of Geosciences in Beijing. Liu Xiaowei and Li Guihua are the director and chemical engineer, respectively, of NGDTC. Fan Chengxing is a gemologist in the Shenzhen laboratory of National Jewellery Quality Supervision and Inspection Center of China (NJQSIC). Ye Hong is a gemologist in the Shenzhen lab of the National Gem Testing Center of China (NGTC).