Kobi Sevdermish (Advanced Quality, Ramat Gan, Israel) showed us large fine “ginger” garnets and discussed the cutting of natural-color tanzanite crystals. The garnets are from a new find in Tanzania, discovered in late 2014. In large sizes, the stones have a pleasing “open” pinkish orange or orangy red hue (figure 1). By “open,” Sevdermish meant the tone is not too dark, remaining lively and relatively bright even in sizes above 30 ct. He noted that many red garnets cut in large sizes have a tendency to become very dark, and this material avoids that pitfall. If fashioned correctly, it “pops.” Along with the virtues of lighter tones and relatively large sizes, it possesses high clarity.

Supply has been limited—Sevdermish had only seen a few parcels of larger rough suitable for cutting gems up to 40 ct—and some of this material was of lower clarity. Standard gemological testing revealed an RI of 1.74 and an SG in the range of “Malaya” garnet (3.78–3.85).

As in 2014, Sevdermish reported that “natural-color” tanzanite remained a very successful item for Advanced Quality. He showed us a selection of unheated gems in a range of subtle secondary colors (greens and pinks) behind the predominant “typical” blue to purple tanzanite colors (figure 2). Sales have been strong in Europe and particularly Asia. According to Sevdermish, this is because no two are exactly alike. To demonstrate, he showed us a large suite of mixed fancy colors (figure 3). 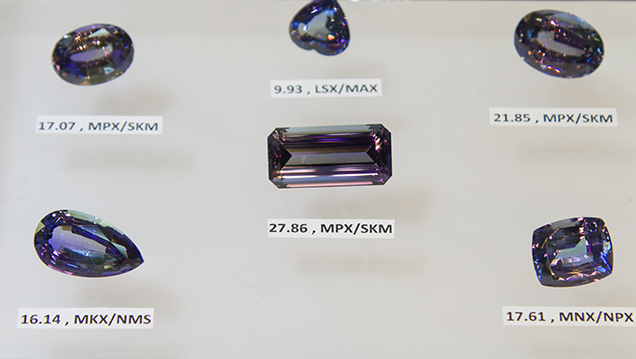 Figure 2. A selection of reportedly natural-color, unheated tanzanites ranging from 9.93 to 27.86 ct. Photo by Duncan Pay/GIA; courtesy of Advanced Quality. 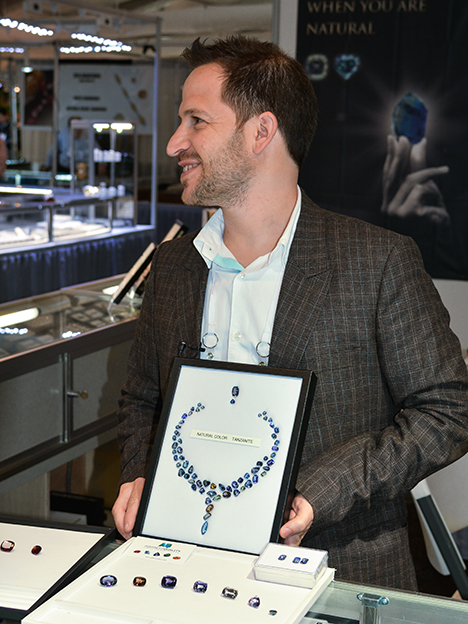 He explained that rough of “odd” colors—unheated pinks and greens—did turn up over the years, but in the last year and a half, material from Block B of the tanzanite mining area has provided some “magnificent” natural colors: lavender, cognac or golden colors, and very rare pink and yellow and green.

Sevdermish noted that buying suitable tanzanite rough in these colors is a painstaking business, even though the company has cultivated connections in Africa that locate this material for them. Some purchases take time, he said, and require him to extend buying trips to obtain a few special, unique pieces. He added that it takes persistence to negotiate with miners and their representatives. And if no other buyers outbid you, you succeed. Sevdermish said that many of the stones at his booth were cut about a week and a half earlier.

Advanced Quality documents, through video recording and photography, each rough piece as it goes through the planning, sawing, and faceting process—in essence, the mine-to-market story of each significant gem. In this way, Sevdermish asserted the company can show—to the best of its knowledge—the unheated nature of its gems to clients. Many of the stones promoted as “unheated” in the market are actually the products of less-than-successful heating, he explained.

Just a couple of weeks earlier, he managed to obtain a few large pieces of rough with unique light yellow colors, one of which yielded a 27.59 ct antique cut (figure 4). The gem came out predominantly greenish yellow, but with flashes of lilac pink, which is what Sevdermish initially expected from the rough. The company debated whether to cut the original rough, as it was such a spectacular piece, but ultimately decided to fashion it because the crystal was not quite perfect enough to be a specimen. 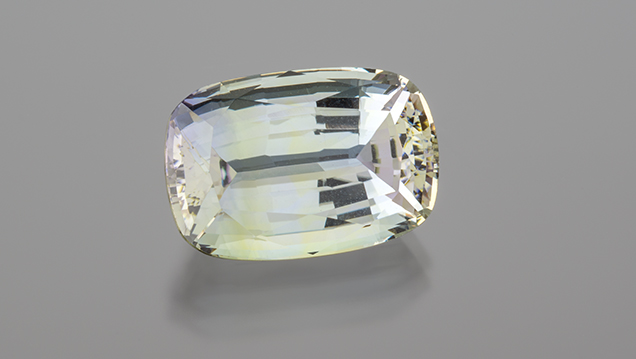 Sevdermish described buying and cutting rough as a lottery. Certain gems—some spinels or even regular tanzanite—are more or less predictable. But with others, especially the rough for this “fancy-color” tanzanite, the results are less foreseeable. The rough for the 27.59 ct gem promised a “kaleidoscope of colors” blending pink, yellow, and green, so Sevdermish expected to see an interplay of colors inside the fashioned gem. Instead, he was dismayed to find the gem was colorless. Fortunately, Sevdermish reported, the hoped-for greenish yellow color returned after the gem had “rested” for two days in its parcel paper.