World renowned for their gem photography, Harold and Erica Van Pelt are no strangers to beauty, accuracy, and integrity. Harold Van Pelt has applied the same principles to gemstone carving for more than 40 years. Thirty-five of his pieces, including the faceted quartz egg with aquamarine pedestal seen in figure 1, have returned to Santa Ana’s Bowers Museum, where they were first exhibited in 2010. The exhibition, called Gemstone Carvings: The Masterworks of Harold Van Pelt, is located in the PIMCO Foundation Gallery of the Dorothy and Donald Kennedy Wing.

The precision of Van Pelt’s work is apparent even at the entrance of the gallery. Displayed here are three carvings, including a stunning moss agate bowl and an agate rhyton shaped as a ram’s head (figure 2). Along the wall, glass cases show 26 of Van Pelt’s carvings. Some are accompanied by rough crystals of the material used in the carving; a striking amethyst cup with 24 flutes carved into the base and body is placed alongside two rough amethyst crystals (figure 3). A candlestick carved from Australian chrysoprase is shown with a piece of rough that reveals the blue-green gem emerging from the gray rock. 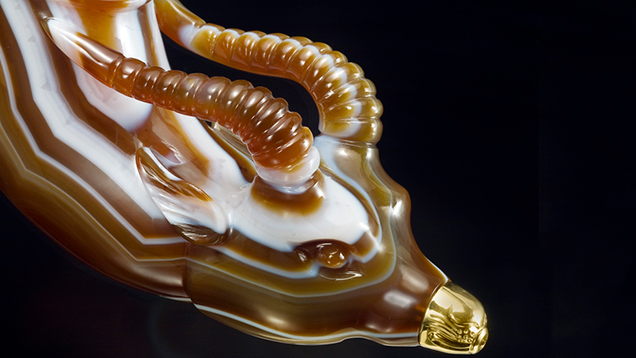 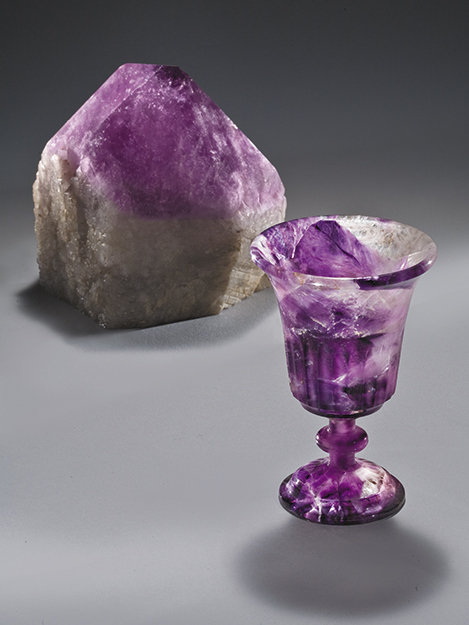 Quartz eggs are prominent throughout the exhibition, along with instructions and photographs along one wall detailing how to create these pieces. In “Suspension,” one of these hollow eggs is supported by gold over a mahogany obsidian base. The eggs are by no means the only showcase for Van Pelt’s talents. A seemingly delicate quartz container suspended from two pillars of rutilated quartz, called “Balancing Act” (figure 4) shows how much strength the material actually possesses. While quartz is featured in many pieces, other materials used in combination include petrified wood and tourmaline, the latter in a stunning vase. 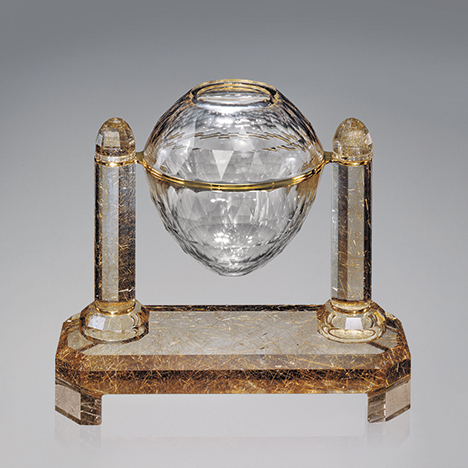 Of particular note are carvings that represent the human anatomy, such as an exquisite reproduction of a skeleton’s hand in white chalcedony. The material was chosen for its resemblance to the color of human bones. Both sides of the piece are visible, and each bone in the hand took months to complete, showing Van Pelt’s attention to even the smallest details of each carving. Similarly, a life-sized recreation of both sides of Erica Van Pelt’s hand in rutilated quartz (figure 5) even captures the shape of her fingernails. A hollow skull carved from quartz with rare izoklakeite inclusions features a jaw that opens and closes (figure 6). Created from a 250 lb. crystal, the finished piece weighs 6.5 lbs. and is named “Izok.” 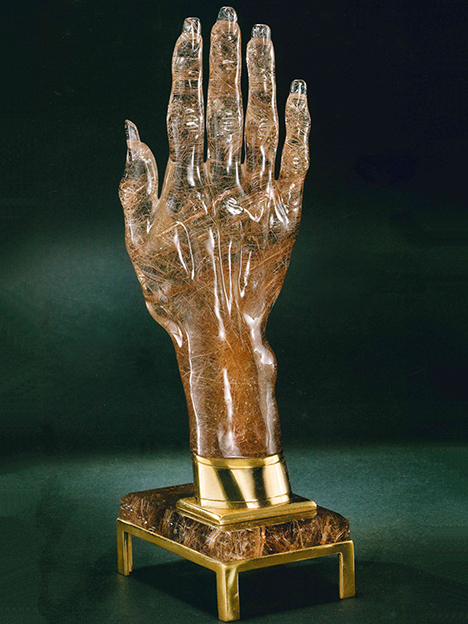 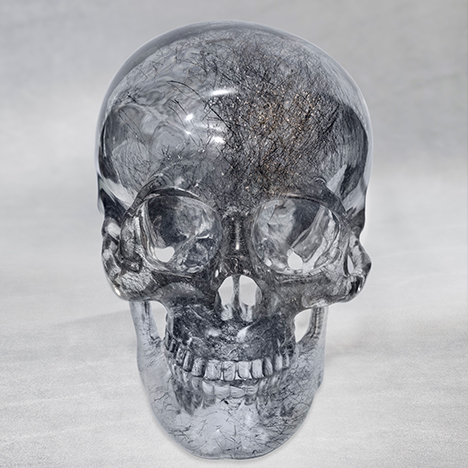 While the exhibition is a must for gem aficionados, Gemstone Carvings is worth a visit for anyone who appreciates beauty and artistic skill.

Gemstone Carvings: The Masterworks of Harold Van Pelt is on exhibit at the Bowers Museum indefinitely. General admission is $13 on weekdays, $15 on weekends. Students and seniors are $10 on weekdays and $12 on weekends; children under 12 are free every day. The Bowers Museum is open Tuesday–Sunday from 10:00 a.m. to 4:00 p.m.; it is closed on Mondays, Thanksgiving, Christmas Day, New Year’s Day, and July 4th.

The lapidary arts of Harold and Erica Van Pelt.