Historians believe the link between humans and lapis lazuli stretches back more than 6,500 years. The gem was treasured by the ancient civilizations of Mesopotamia, Egypt, China, Greece, and Rome. They valued it for its vivid, exquisite colour, and prized it as much as they prized other blue gems like sapphire and turquoise.

Badakshan, a province in present-day Afghanistan, is a forbidding wasteland of mountains, bare of any vegetation. The sheer mountain faces rise as high as 17,000 feet, and are scored with treacherous ravines. Humans make their way there to seek one thing only: the azure treasure that is fine lapis lazuli. 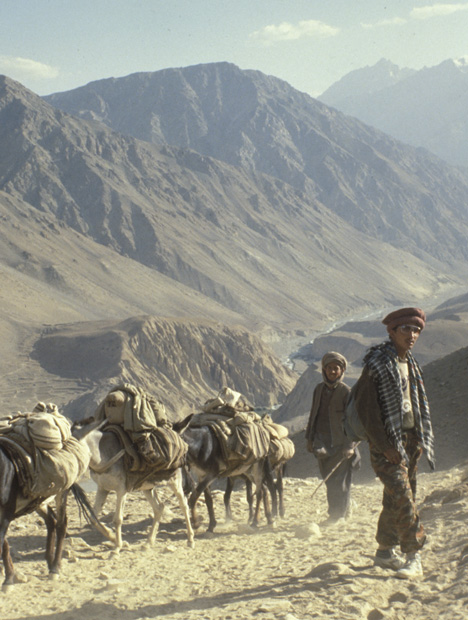 The miners’ supplies have to be brought into the desolate area by mule train. - Gary
Bowersox
The same was true as far back as 700 BC, when the region was part of a country known as Bactria. The lapis mines that were producing then are still producing today. They are, in fact, the world’s oldest known commercial gemstone sources. 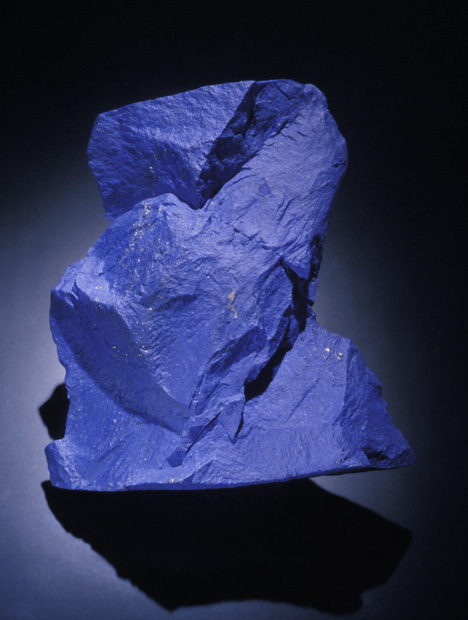 The ancient mines of Bactria - now Afghanistan - are still producing lapis today. This
fine-colour specimen was named "The Owl" because of its distinctive shape. It weighs
about 2 lbs. (1 kg). - Robert Weldon, courtesy M. Chung
Merchant caravans transported their precious blue cargo across Bactria, on their way to the great cities of the ancient Greeks, Indians, Egyptians, Mesopotamians, and Persians. Marco Polo referred to the area’s lapis mines in 1271, but few outsiders have seen them because of their inhospitable location.

For thousands of years, lapis has been fashioned to show off its rich, dark colour. Typically, lapis used in jewellery has been cut into cabochons, beads, inlays, and tablets. But lapis lazuli’s use has never been limited to jewellery alone. It’s also a popular carving material. Throughout its history, lapis has been fashioned into practical objects, including game boards, bowls, dagger handles, hair combs, and amulets. 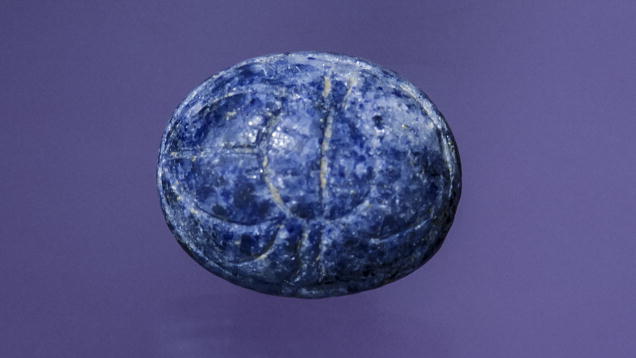 This lapis cabochon features the ancient symbol of a scarab beetle carved into its surface. - Maha Tannous

Inlay, a typical lapis cutting style, is featured in this man’s ring. The gold mounting complements the pyrite flecks in the inlay. - Mike Havstad

Throughout history, lapis has been fashioned into ornamental objects. This elaborate
carving takes advantage of the striking contrast between light-coloured calcite and the
deep blue of lapis.
Today, lapis is frequently fashioned into freeform and nature-themed sculptures. Some of these carvings become wearable art, others are purely decorative. 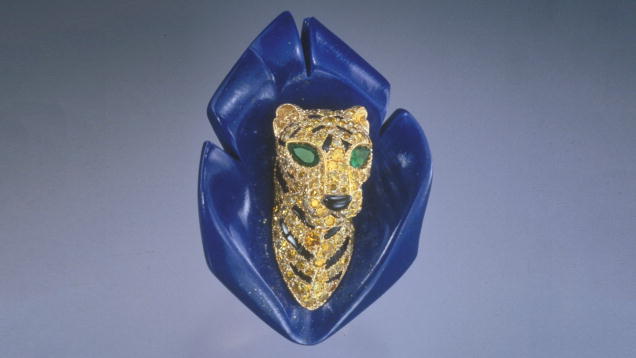 This delicate carving is part of the 21-piece “Symphony in Gemstones” collection. - Robert Weldon, gift of Art Sexauer