The term “trapiche,” named after the Spanish word for the spoked wheel used to grind sugar cane, describes a very special growth phenomenon. Basic components usually include a six-ray star radiating from the center of the stone, a clear or dark hexagonal core at the center, and a transition between the core and the outer sectored crystal. It is commonly associated with emerald, but trapiche corundum, tourmaline, quartz, and andalusite are also found (T. Hainschwang et al., “Trapiche tourmaline from Zambia, Spring 2007 G&G, pp. 36–46). For the past 40 years, gemologists have tried to interpret this phenomenon, proposing theories that involve different growth rates and growth conditions. 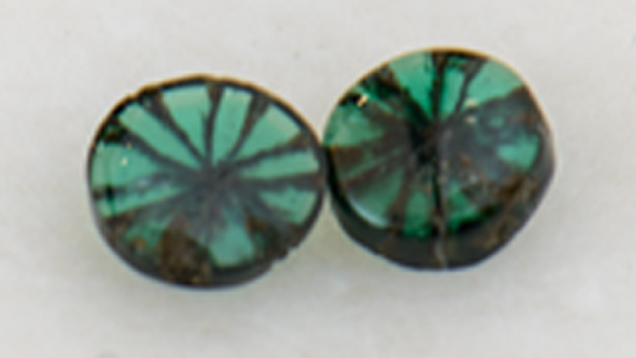 Figure 1. These rare double-trapiche emerald slices, about 1.77 ct each, are from Muzo, Columbia. Courtesy of Equatorian Imports Inc. Photo by Eric Welch.

At the AGTA show, Equatorian Imports showed this contributor two pieces of emerald with a very rare double-trapiche pattern. They weighed about 1.77 ct each, and according to the dealer they are from Muzo, Columbia. Instead of a six-ray star, twelve arms radiated from the center of the stone (figure 1). There was no core at the center. The twelve-ray star appeared to be composed of two six-ray stars shifted slightly from each other. All the rays had a dendritic appearance, with some of them intertwined. Unlike previously reported trapiches, these two specimens displayed at least three growth sectors. The formation of this double-trapiche pattern was most unusual.