Fire opal is an attractive variety of gem opal characterized by its red-orange-yellow bodycolor, with or without play-of-color. Since about 2013, the Chinese market has seen an increase in natural, synthetic (sold as Mexifire), and treated fire opals, posing identification challenges for the gemologist. 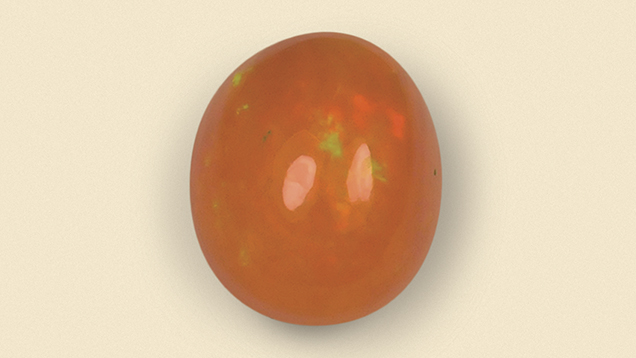 Figure 1. This 3.87 ct translucent orange fire opal with play-of-color was identified as a coated stone. Photo by Wen Han.

At the July 2014 Beijing Jewelry Fair, a fire opal with a rather unusual orange bodycolor (figure 1) attracted our interest. It was a 3.87 ct oval cabochon with fair play-of-color, measuring approximately 14 × 10 × 6 mm. Its spot RI of about 1.39 and hydrostatic SG of 1.85 were both lower than the values for most natural fire opal. It was inert to both long- and short-wave UV radiation; untreated fire opal may also be inert to UV radiation or show green and blue fluorescence. Magnification revealed obvious scratching and small pits on the surface (figure 2), suggesting a lower hardness and the presence of a coating. We cut the sample in half for further examination. High magnification clearly showed the boundary between the orange layer and the substrate, which was also orange opal. The coated layer was about 60–90 μm thick (figure 3). 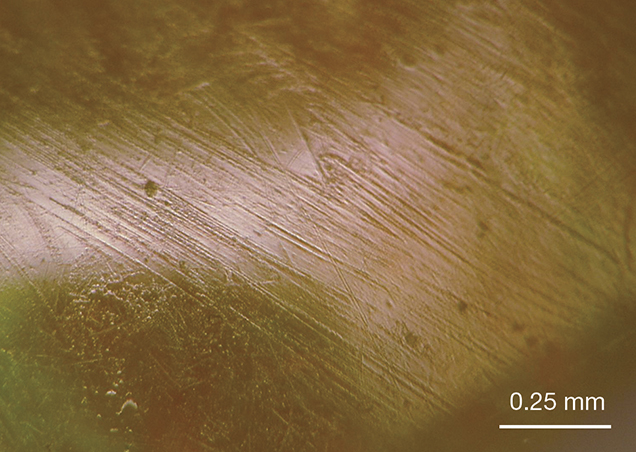 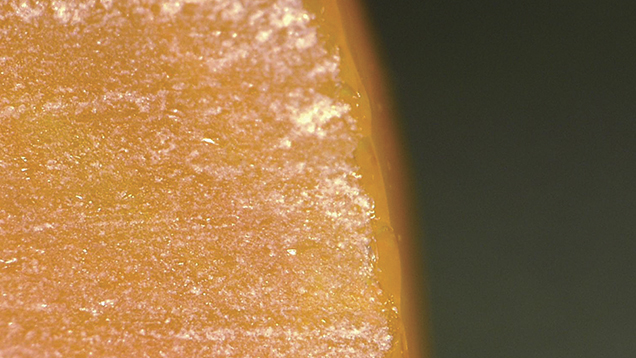 EDXRF chemical analysis detected mainly Si and minor amounts of Ca, Na, and K. Fourier-transform infrared (FTIR) and Raman spectroscopy were used to identify the coating. Infrared reflectance spectroscopy revealed three strong bands at 1099, 789, and 474 cm–1 that are related to the fundamental Si-O vibrations, as expected for natural fire opal. Then we scraped off the coating with a razor blade to obtain its infrared transmittance spectrum. The peaks, specifically those at 2926, 1729, 1451, and 1159 cm–1, indicated the presence of organic matter consistent with acrylic polymer (figure 4). The Raman scattering spectra of the fire opal revealed several peaks attributed to both the substrate opal and the coating (figure 5). The Raman bands at about 350, 785, and 1080 cm–1, due to different stretching and bending vibration modes of the Si-O system, are typical for opal-CT. Other peaks, including 1320 and 1610 cm–1, are attributed to the acrylic coating material. Acrylic coatings are applied to various gem materials, such as lapis lazuli and jadeite (Summer 1992 Gem News, p. 135). This coating of acrylic polymer was used to enhance the fire opal’s color and seal its fissures. The coating also lowered the stone’s RI and SG values. 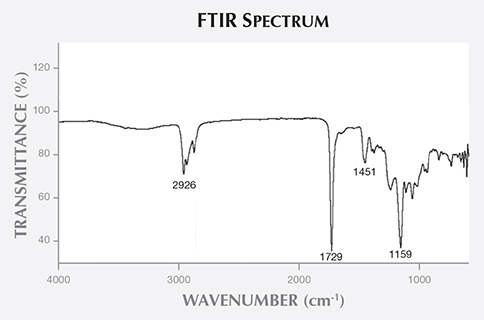 Figure 4. The FTIR spectrum of the coating scraped from the surface of the fire opal exhibits characteristic peaks at 2926, 1729, 1451, and 1159 cm–1 consistent with acrylic polymer. 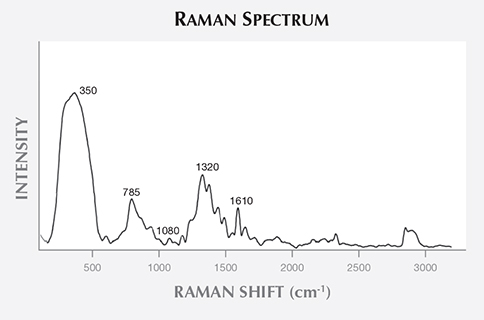 Our investigation, believed to be the first report of coated fire opal in the Chinese market, reinforces the need for caution when buying these products. This coated fire opal’s lower RI and SG values, combined with magnification and Raman spectroscopy, are effective and nondestructive means of identification.