Green (chromium-bearing) lawsonite first appeared on the mineral market in 2011–2012. It came from an undisclosed locality on the Greek island of Syros. The only large chromian lawsonite crystals previously documented are from Turkey (S.C. Sherlock and A.I. Okay, “Oscillatory zoned chrome lawsonite in the Tavsanli Zone, northwest Turkey,” Mineralogical Magazine, Vol. 63, No. 5, 1999, pp. 687–692) and the western Alps (C. Mevel and J.R. Kienast, “Chromian jadeite, phengite, pumpellyite, and lawsonite in a high-pressure metamorphosed gabbro from the French Alps,” Mineralogical Magazine, Vol. 43, No. 332, 1980, pp. 979–984). The maximum crystal size observed by Sherlock and Okay was approximately 500 microns, while Mevel’s and Kienast’s largest grains were only 200 microns in length. Interestingly, these grains were reported to be pink. Samples available online ranged from US$50 to more than US$350, and all were reported to be from Syros. To the best of our knowledge, chromian lawsonite is not available from other localities.

We purchased a chromian lawsonite sample purportedly from Syros for mineralogical analysis (figure 1). The sample measured 4.8 × 2.8 × 2 cm, and its largest crystal was about 1.5 cm in length. The crystals were deep green and present in a matrix dominated by ankerite and actinolite. Our sample appeared similar to most other chromian lawsonite samples available for purchase online. 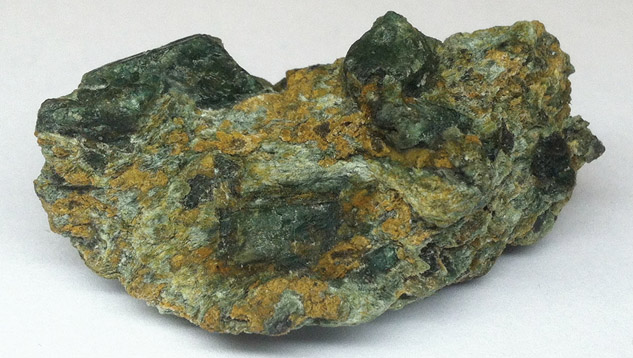 Initial microscopic observations of the large green crystals revealed a smooth wavy surface (figure 2). Raman analysis of this surface showed peaks at 1301, 1342, 1451, and 2720 cm–1 and a broad peak at 2800–3000 cm–1 with secondary peaks at 2871, 2932, and 2961 cm–1 (figure 3). These peaks are typical of Group B fillers (strong aliphatic peaks), which have been used to enhance the appearance of emeralds (M.L. Johnson et al., “On the identification of various emerald filling substances,” Summer 1999 G&G, pp. 82–107). The absence of Raman peaks in the approximately 1600 cm–1 region indicates that this coating is not likely a Group A, C, D, or E filler (Johnson et al., 1999; L. Kiefert et al., “Raman spectroscopic applications to gemmology,” Handbook of Raman Spectroscopy, Vol. 28, 2001, pp. 469–490). This smooth surface was waxy to the touch and easily scratched with a fingernail, and wiping it off with acetone revealed a light green to white surface. All peaks associated with this coating disappeared after cleaning with acetone (again, see figure 3). 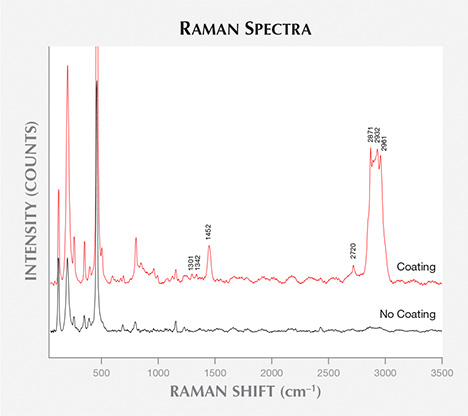 Figure 3. Raman spectra of the coating before and after cleaning the surface with acetone. Spectra were taken in the same location, with an approximately 2 micron spot size. The typical Raman spectrum of quartz, with clinochlore contamination, is observed in the low-frequency region. Spectra are offset for clarity.

After the coating was removed, Raman analysis of the formerly dark green crystals revealed spectra corresponding to the minerals muscovite/phengite, clinochlore, and quartz (figure 4). About a hundred measurements were taken of all the large green crystals in the sample at the 2 micron scale-length, and no evidence of lawsonite was found. This assemblage of minerals is common in lawsonite pseudomorphs from Syros; prograde pseudomorphs, also containing zoisite and 0.5–3.0 cm in size, are reported to be abundant in this locale (J.B. Brady et al., “Prograde lawsonite pseudomorphs in blueschists from Syros, Greece,” GSA Annual Meeting, 2001, paper 105-0). 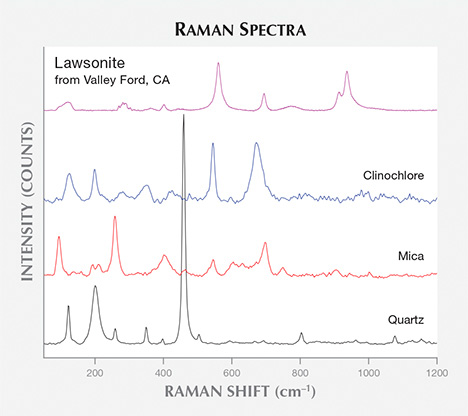 Figure 4. Raman spectra of acetone-cleaned large green crystals (bottom three spectra). Mica and clinochlore are the most abundant minerals in the large green crystals. The reference lawsonite spectrum is for a sample from the UCSC mineral collection (sample no. 6481), from Valley Ford in Sonoma County, California. Spectra offset for clarity.

All samples of chromian lawsonite that we have found for purchase are from Syros. Thus, buyers should be aware that these could potentially be artificially coated lawsonite pseudomorphs. Further analysis of other “chromian lawsonite” samples is required to document whether any true chromian lawsonites from this locality actually exist.

Earl O’Bannon is a graduate researcher with the Earth and Planetary Sciences Department and Quentin Williams a professor of mineral physics/experimental geochemistry, both at the University of California Santa Cruz.

Drs. Hilde Schwartz and Elise Knittle provided helpful discussions about pseudomorphs, and Chelsea Gustafson (UCSC Chemistry Department, Partch Lab) assisted with the microscope used to take images of the coating. The UCSC Mineral Physics Lab is supported by the NSF.