Freshwater Pearls, Blister and Loose, with Their Host Shells 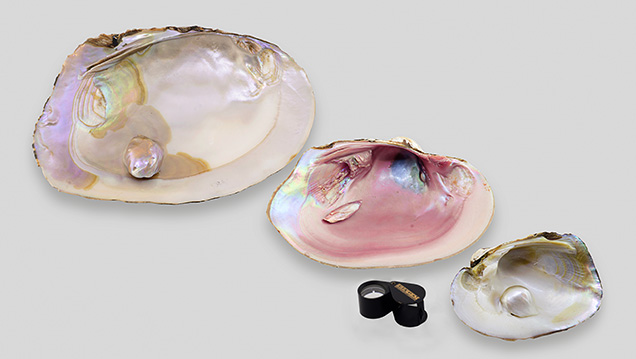 GIA occasionally receives blister pearls attached to their host shells for identification (Winter 2015 Lab Notes, pp. 432–434; Summer 2017 Lab Notes, pp. 231–232), which can provide helpful information on the overall growth conditions and the mollusk species. Recently the New York laboratory had an opportunity to study three freshwater specimens: two blister pearls still attached to their shells, and one loose “wing” pearl that was reportedly found in the shell with which it was submitted (figure 1).

While approximately 1,000 species of freshwater mussels have been identified worldwide, the United States alone is said to host about 300 species, compared to 96 species in Africa, 60 in China, and 12 in Europe (Virginia Department of Game and Inland Fisheries, 2018, https://www.dgif.virginia.gov/wildlife/freshwater-mussels/). The number of U.S. species shows the spectacular diversity of its freshwater resources. Hence, it proves how difficult it can be to apply correct zoological names to specific shells. However, experienced local fishermen who harvest the mussels are often the source of helpful information (T. Hsu et al., “Freshwater pearling in Tennessee,” 2016). The owner claimed that the loose wing-shaped pearl (figure 1, center) was found in a Potamilus purpuratus “Bluefer” mussel in a U.S. river. Bluefer mussels exhibit a pinkish purple to deep purple nacre lining and can produce pearls of a similar color range. Energy-dispersive X-ray fluorescence (EDXRF) spectrometry confirmed that it originated from a freshwater environment, based on its chemistry result of more than 1000 ppmw manganese. Freshwater pearls usually show higher than 100 ppmw manganese content. Real-time X-ray microradiography (RTX) revealed a natural growth structure, while Raman spectroscopy detected aragonite and polyenic peaks, the latter indicating the presence of natural coloring pigments (S. Karampelas et al., “Role of polyenes in the coloration of cultured freshwater pearls,” European Journal of Mineralogy, Vol. 21, 2009, pp. 85–97). This specimen also displayed the characteristic elongated, flat, and slightly curved shape characteristic of wing pearls that, as the name implies, resembles the shape of a bird’s wing. Wing pearls commonly form in the hinge area within shells, and it was interesting to see a similar-sized cavity in the shell submitted with this pearl.

The other two blister pearls were also claimed to have originated from a freshwater environment, and this was confirmed by their optical X-ray fluorescence reactions. Both specimens showed a strong yellowish green luminescence under X-ray excitation, a result that agrees with pearls from a freshwater environment due to their higher manganese content (H.A. Hänni et al., “X-ray luminescence, a valuable test in pearl identification,” The Journal of Gemmology, Vol 29, No. 5/6, 2005, pp. 325–329). According to the owner, the smaller shell (figure 1, right), possibly a washboard mussel (Megalonaias nervosa), was found in a U.S. river, while the larger shell (figure 1, left) is likely a hybrid Hyriopsis mussel commonly used by cultured pearl farmers in China. Blister pearls form when a whole pearl within the connective tissue breaks through the mantle due to its size and/or weight, or for some other reason, and presses against the nacreous inner surface of the shell, where subsequent nacre deposition fuses the pearl to the shell (E. Strack, Pearls, Ruhle-Diebener-Verlag, Stuttgart, Germany, 2006, p. 124).

Figure 2. Close-up images of the freshwater blister pearls from China (left) and the United States (right) attached to their hosts. Photos by Joyce Wing Yan Ho. 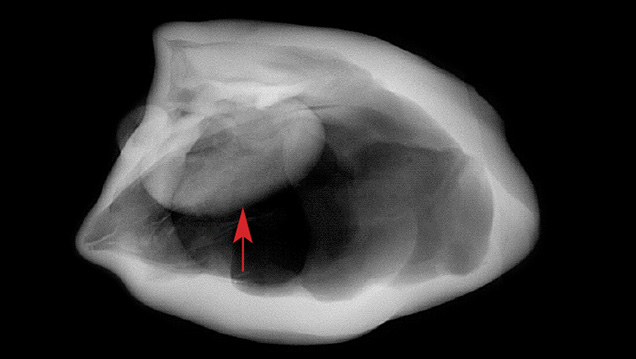 Figure 3. The RTX structure of the large blister pearl (shown on the left in figures 1 and 2) revealed a void-like structure in which a near-oval feature is visible (indicated by the arrow).

The size of these two blister pearls is impressive, and both protrude conspicuously from the shell while still attached to their hosts (figure 2). The RTX results of the smaller blister pearl revealed concentric growth arcs proving its natural origin. However, the RTX results of the larger blister pearl revealed a void-like structure that may be found within natural and non-bead-cultured pearls, but a near-oval feature inside the void is uncommon in natural pearls (figure 3). GIA gemologists believe this oval feature was the triggering mechanism that likely resulted in the formation of the blister pearl. Whether this oval feature is a by-product of pearl culturing or a natural formation is hard to prove without examining the blister pearl thoroughly in other orientations, which was precluded by its size and position. While the identification of some freshwater pearls remains challenging, these known freshwater samples together with their host shells serve as useful references for laboratory gemologists.

Joyce Wing Yan Ho is a staff gemologist at GIA in New York.

Blister pearls attached to shells are seen in both the Bangkok and New York laboratories.

Two blister pearls attached to a host shell believed to have fossilized during the later Pleistocene period and discovered in southeastern Kenya are studied.