One of the first things most people learn about diamonds is that not all diamonds are created equal. In fact, every diamond is unique. Diamonds come in many sizes, shapes, colours and with various internal characteristics.

All polished diamonds are valuable. That value is based on a combination of factors. Rarity is one of those factors. Diamonds with certain qualities are rarer—and more valuable—than diamonds that lack them.

Jewellery professionals use a systematic way to evaluate and discuss these factors. Otherwise, there would be no way to compare one diamond to another. And there would be no way to evaluate and discuss the qualities of an individual diamond. Diamond professionals use the grading system developed by GIA in the 1950s, which established the use of four important factors to describe and classify diamonds: Clarity, Colour, Cut and Carat Weight.

Diamonds can be fashioned into a variety of shapes and still be beautiful.

A diamond’s value is often affected by the rarity of one or more of the 4Cs. Colourless diamonds are scarce—most diamonds have tints of yellow or brown. So a colourless diamond rates higher on the colour grading scale than a diamond that is light yellow. Value and rarity are related: In this case a colourless diamond is rarer and more valuable than one with a slight yellow colour. The same relationship between rarity and value exists for clarity, cut and carat weight.

Today, the descriptions of each of the 4Cs are more precise than those applied to almost any other consumer product. And they have a long history. Three of them—colour, clarity and carat weight—were the basis for the first diamond grading system established in India over 2,000 years ago.

Subtle differences in colour can dramatically af­fect diamond value. Two diamonds of the same clarity, weight and cut can differ in value based on colour alone. Even the slightest hint of colour can make a dramatic difference in value. 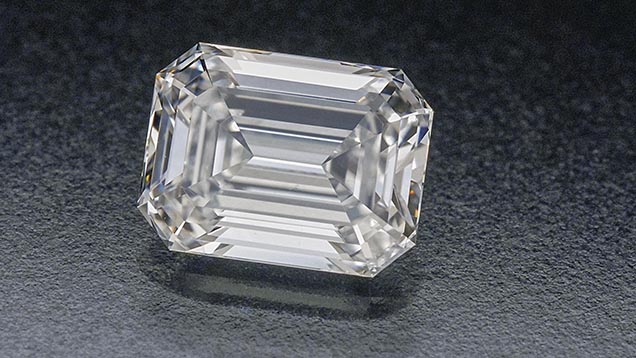 This emerald cut diamond is colourless and is a D colour grade. – Courtesy Lazare Kaplan Diamonds 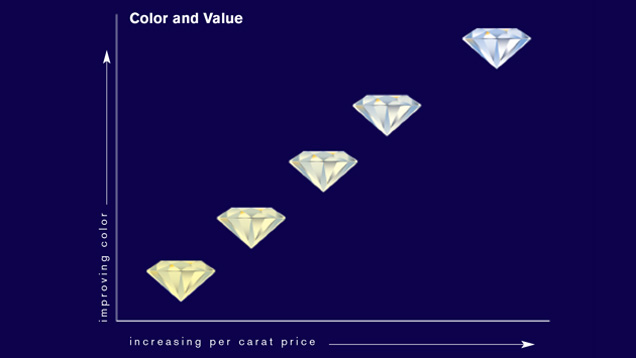 In the normal colour range, the closer a diamond gets to colourless, the higher its per-carat price. There’s an especially large leap in the price of a colourless diamond, which is extremely rare. 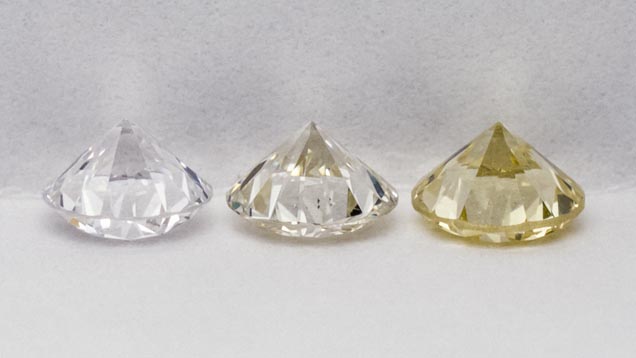 These diamonds—graded E, K, and Z—represent diamond colours near the top, middle and bottom of the GIA Colour Scale. - © GIA & Tino Hammid

At the GIA Laboratory, diamonds are colour graded under controlled conditions by comparing them to round brilliant diamonds of known colour, called masterstones. 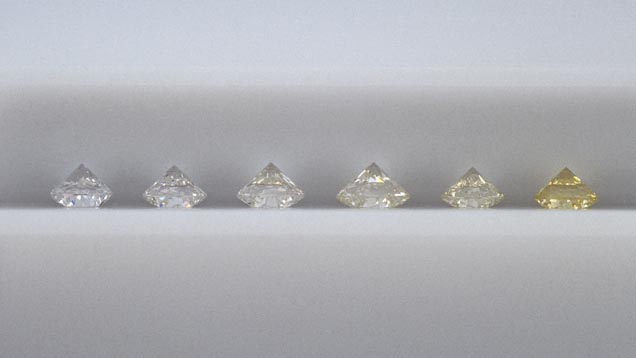 To eliminate the guesswork from grading a diamond’s colour, graders compare it to masterstones that represent known colours in the GIA D-to-Z scale. - © GIA & Tino Hammid

The GIA D-to-Z scale is the industry standard for colour-grading diamonds. Each letter represents a range of colour based on a diamond’s tone and saturation.

Many diamonds emit a visible light called fluorescence when they’re exposed to ultraviolet (UV) radiation. Although invisible to the human eye, UV radiation is everywhere. Sunlight contains it. Fluorescent lights emit it, too. Under the right conditions, you can see fluorescence in about 35 per cent of gem diamonds.

Blue is the most common fluorescent colour in gem-quality diamonds. In rare instances, fluorescence can be white, yellow, orange or many other colours.

Strong blue fluorescence can make a light yellow diamond look closer to colourless in sunlight. Blue and yellow are colour opposites and tend to cancel each other out, so blue fluorescence masks the yellow colour. If the fluorescence is too strong it can make the stone look cloudy or “oily”, which can lower the value of the diamond.

Few things in nature are absolutely perfect. This is as true of diamonds as anything else. Diamonds have internal features, called inclusions, and surface irregularities, called blemishes. Together, they’re called clarity characteristics. Clarity is the relative absence of inclusions and blemishes.

Among other things, blemishes include scratches and nicks on a diamond’s surface. Inclusions are generally on the inside, and some might break the surface of the stone. Sometimes, tiny diamond or other mineral crystals are trapped inside a diamond when it forms. Depending on where they’re located, they might remain after the stone has been cut and polished, and they can affect a diamond’s appearance.

Clarity characteristics might have a negative influence on a diamond’s value, but they can have positive effects as well. For one thing, they help gemmologists separate diamond from imitations. (This is easier with included diamonds than with flawless ones.) And because no two diamonds have exactly the same inclusions, they can help identify individual stones. They can also provide scientists with valuable information about how diamonds form. 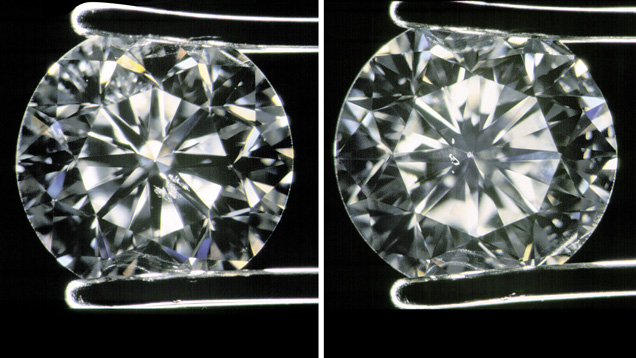 Like the rest of the 4Cs, clarity’s influence on value is directly related to the concept of rarity. Flawless is the top grade in the GIA Clarity Grading System. Diamonds graded Flawless don’t have visible inclusions or blemishes when examined under 10-power (10X) magnification by a skilled and experienced grader. 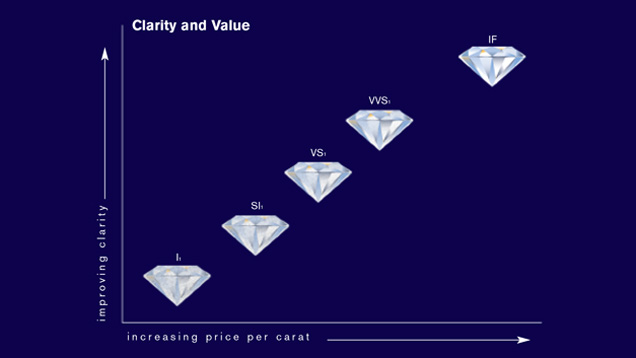 As clarity increases, and if all other value factors are equal, diamond price per carat also increases.

Flawless diamonds are very rare—so rare, in fact, that it’s possible to spend a lifetime in the jewellery industry without ever seeing one, and they command top prices.

The GIA clarity scale includes eleven diamond clarity grades. The scale narrows at the top because there are very few diamonds in the higher clarity grades.

Sometimes, one factor makes more difference to the clarity grade than the others. But it’s not always the same one. The relative importance of each factor varies from diamond to diamond. For example, an inclusion off to the side of a stone would have less impact on clarity than the same size inclusion located directly under the table. In this case, the position is probably the determining factor. 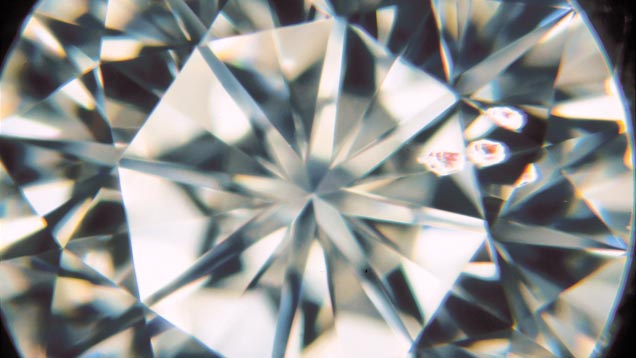 Occasionally, if an inclusion has the potential to cause damage to a stone, it can affect the grade. But this is rare, and usually only applies to Included (“I”) diamonds.

These terms were shortened to the initials VVS, VS, SI, and I. The abbreviations eventually gained acceptance throughout the international diamond community. Their use is now widespread regardless of how the words they stand for translate into various languages. Very may translate to tres in French, for instance, but in France a very slightly included diamond is still a VS. Even a country like Russia, with a completely different alphabet, uses the same abbreviations.

A beautifully finished diamond is dazzling, with every facet displaying the craftsman’s skill and care. When a diamond interacts with light, every angle and every facet affects the amount of light returned to the eye. This is what gives it its face-up appearance. 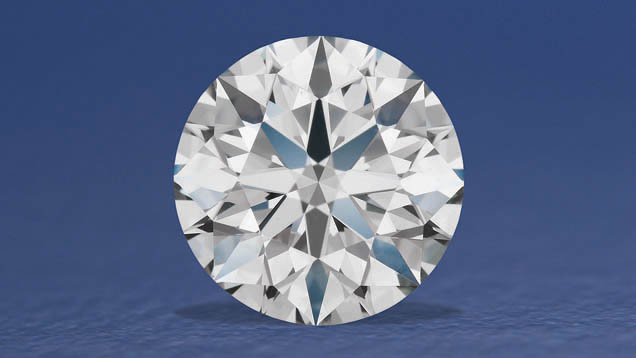 In efforts to differentiate themselves, and because of increasing demand for precision in cutting, many manufacturers fashioned diamonds to exacting standards throughout the decade. Note the precise arrow pattern in this 1.54 ct diamond.

A diamond’s proportions determine how light performs when it enters the diamond. If light enters through the crown and goes out through the pavilion, the diamond will look dark and unattractive.  Diamonds with different proportions and good polish make better use of the light, and will be bright, colourful and scintillating. 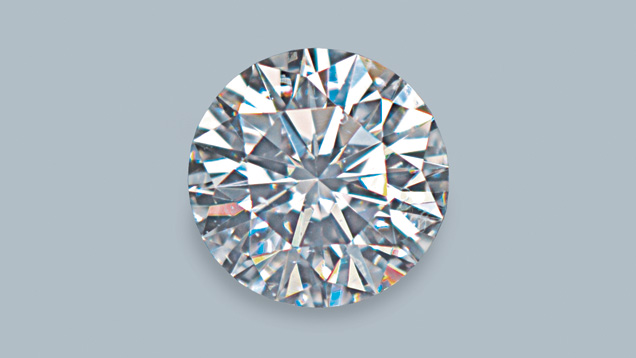 A well-cut diamond displays the beauty consumers expect to see in a diamond.

A beautiful diamond looks the way it does because of three optical effects: white light reflections called brightness, flashes of colour called fire, and areas of light and dark called scintillation. Pattern is the relative size, arrangement and contrast of bright and dark areas that result from a diamond’s internal and external reflections. There must be enough contrast between the bright and dark areas to give the pattern a crisp, sharp look.

The diamond industry has long known that some proportion combinations make light perform better than others. In recent years, however, scientists and researchers at GIA’s Research Department and the GIA Laboratory have shown that there are many variations and combinations of proportions that will maximise brilliance and fire in round brilliant cut diamonds. 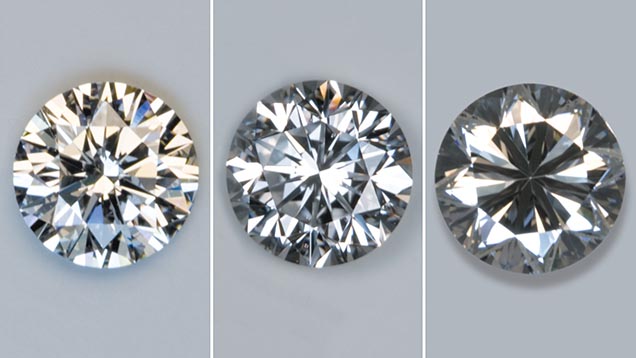 As a general rule, the higher the cut grade, the brighter the diamond. Under fluorescent lighting, these diamonds (left to right) display high, moderate and low brightness.
The term “cut” also can describe a fashioned diamond’s shape. Shapes other than the standard round brilliant are called fancy cuts. They’re sometimes called fancy shapes or fancies. Fancy shapes also have names of their own, based on their shapes. The best known are the marquise, princess, pear, oval, heart and emerald cut.

Fancy-shape diamonds, along with the classic round diamonds, are popular choices for today’s jewellery consumer. Courtesy Lazare Kaplan Diamonds

Many goods are sold by weight — by the kilogram, ounce, pound, or ton. Even people who have never bought a diamond are used to the idea that weight and price are related. They understand that a larger diamond is probably more valuable than a smaller one. But there are two things that often surprise people when they start learning about diamonds and carat weight.

The first is the precision with which diamonds are weighed. Diamond weights are stated in metric carats, abbreviated “ct.” One metric carat is two-tenths (0.2) of a gram—just over seven thousandths (0.007) of an ounce. One ounce contains almost 142 carats. A small paper clip weighs about a carat.

The metric carat is divided into 100 points. A point is one hundredth of a carat.

Diamonds are weighed to a thousandth (0.001) of a carat and then rounded to the nearest hundredth, or point. Fractions of a carat can mean price differences of hundreds—even thousands—of pounds, depending on diamond quality. 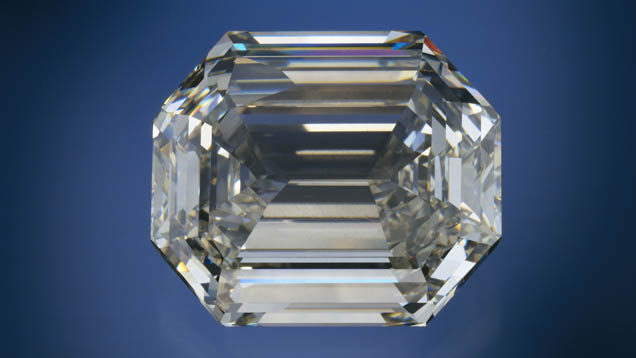 The relationship between rarity, weight and value can be surprising. People know that a pound of sugar costs twice as much as a half-pound of sugar. But diamonds aren’t a commodity like sugar. Their price depends on a number of variables—weight is just one of them. So it’s not always easy to understand, or explain, why a 1-carat diamond is worth, say, $6,000, while a 2-carat diamond of similar quality might be worth $15,000.

It’s really a simple concept: Large diamonds are rarer than small diamonds. The scarcer something is, the more it is worth. So a larger stone doesn’t just cost more. It also costs more per carat. A 1-carat diamond weighs the same as four 0.25-carat diamonds. But even if all the other quality factors are equal, the larger diamond is worth much more than the sum of the four smaller diamonds.

Carat weight can also be symbolic. While the visual difference between a 0.98-carat diamond and a 1.01-carat diamond is negligible, many people will opt for the larger stone—even at a much higher price. Some weights are considered “magic sizes”: half carat, three-quarter carat, one carat, etc. There’s not much difference in their weights, but if both are D-colour round brilliants with identical clarity and cut, the size makes all the difference. They really don’t look much different, but if a consumer’s heart is set on the one-carat size, the difference is enormous. The fact that the second stone is slightly over the “magic” one-carat size can give it as much as a 20 per cent difference in price with only a 6-point difference in weight. 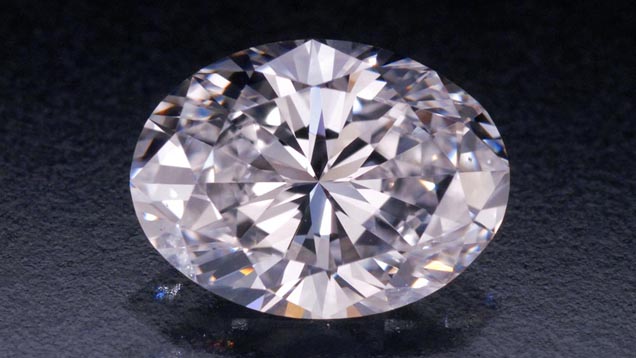 Don’t confuse the term carat with karat. Karat is a unit of measure used to describe how much pure gold there is in an alloy.

How to Choose a Diamond

Learn More About
The April Birthstone

Discover the meaning and history of diamond, the April birthstone, and where it can be found.
Learn More

GIA invented the science of grading diamonds with the 4Cs and the International Diamond Grading System™ – standards used by jewellery professional around the world. So there’s no better place to study the art and science of diamond grading.
Learn More