Two rare fancy colored diamonds set landmark price records last week at Geneva auctions. In the meantime, the more mundane side of the world diamond industry is still struggling with reductions in financing, tight liquidity and soft polished prices.
First the auctions: Christie’s sold a GIA-graded 14.82 carat Fancy Vivid orange diamond for $35.5 million.  At $2.4 million per carat, this is the highest-ever per-carat price for a gemstone at auction. The following day, a bidder paid $83.2 million ‒ the highest price ever paid for any gemstone anywhere ‒ for the 59.6 carat Pink Star, a Fancy Vivid pink diamond at Sotheby’s. This GIA-graded pink didn’t just beat the old record of $46 million (also a pink diamond), it demolished it. (Update: According to media reports, Sotheby’s cancelled the sale of the Pink Star several months after the auction when the winning bidder was unable to complete the transaction.) 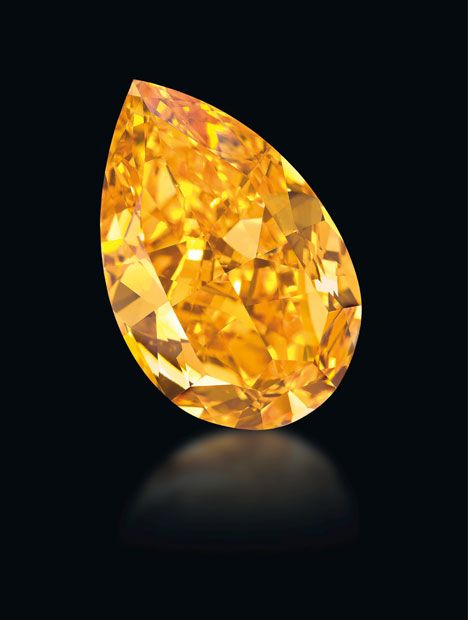 The Orange, a GIA-graded 14.82 carat Fancy Vivid orange diamond, sold for $35.5 million at a Christie’s auction Nov.11, 2013 in Geneva. Photo courtesy of Denis Hayoun Diode SA Geneva
These were the top lots. Buyers, largely anonymous, also paid top prices for other lots: $4.6 million for the Cote D’Azure brooch containing a 58.29 carat Burmese sapphire and nearly $10 million for the Patino emerald and diamond necklace. The Pink Star helped Sotheby’s auction total set a new total record for a jewelry sale ‒ more than $199 million ‒ while Christie’s was $125 million.
And, to provide context, there were also record prices in the auction houses’ fine art sales last week. A work by the Irish-born British artist Francis Bacon drew a top bid of $142 million ‒ the most money ever paid for a piece of art at auction. In the past two years, five paintings have changed hands at auction for more than $100 million each and a Cezanne reportedly sold for more than $250 million in a private sale.
Luxury analysts say the market for such top pieces is driven by the ultra-wealthy in Western countries who are still concerned about uncertain financial markets and low interest rates. They view rare gems and art as a more certain investment, while, in other parts of the world, buyers use such assets as a hedge against political uncertainty.
Other Diamond News: Little of this translates to the market for diamonds and gemstones that sell for thousands (and hundreds) of dollars, instead of millions.
Lack of profits and liquidity issues dominated the inaugural De Beers sight held in Botswana, November 12-15. The size of the sight was reportedly $470 million, though some companies may have received additional allocations. According to one report, prices were moderated slightly, about 2% on some goods, and the assortments were more closely in line with market needs.

Despite this, some dealers did ‒ again ‒ leave goods on table they could not cut or resell profitably, though apparently not at the levels of the previous sights.
The sight coincided with the first full tender auction of Botswana-mined rough by the Okavango Diamond Company, the auction subsidiary created by De Beers and the Botswana government to boost local manufacturers. Unlike the pilot sale where prices of some rough categories ran substantially higher than comparable sight goods, these results were reportedly in close alignment with De Beers set-sale prices. The banks’ sharp credit reductions of the past two months kept the bidding down at the tender sale.
On an encouraging note, holiday jewelry sales in the U.S. are expected to increase about 4-5% over the 2012 total, according to most estimates. In unit terms, this increase should be a point or two higher because of the decline in gold and (to a much lesser extent) diamond prices during the year.
For diamonds, retailer reports continue to head in diverging directions. Mid-priced stores and chains look to down-trade quality and size (lots of calls for “light sizes” have been reported), while higher-end retailers are in search of top makes.
Indeed, one luxury market study reports that the Americas have surpassed China in terms of overall luxury goods spending, registering a 4% increase in 2013 compared with 2012, versus a 2.5% increase in China.
A steady pace of store openings in second-tier cities in the U.S. has helped drive growth in the region, according to the 2013 Luxury Goods Worldwide Market study. This trend, along with an increasing number of Chinese tourists in Las Vegas and Los Angeles, has boosted growth. The report was commissioned by Altagamma, the Italian luxury goods manufacturers’ industry foundation.