The Indian Gemological Institute – Gem Testing Laboratory, New Delhi recently examined a 1.42 ct (7.06–7.08 × 4.49 mm) round brilliant. Viewed perpendicular to the pavilion facets with its table down, the sample displayed a grayish yellow color, but a slight rotation changed the color to pinkish. On viewing the specimen parallel to the direction of the growth planes, the sample appeared grayish yellow; viewing perpendicular to these same planes, the sample appeared pinkish.

Infrared spectroscopy showed features typical for type IIa diamond. Magnification revealed no internal features except for a feather on the girdle and the two growth planes, which appeared textured. There are very fine pinpoint-like inclusions lying just along the planes (figure 1, left). These planes of pinpoints were also visible from the table (figure 1, right). Examined in the DiamondView (using less than 225 nm short-wave UV radiation) to reveal its growth patterns, the round brilliant showed parallel striations indicative of CVD growth (figure 2). It also exhibited moderate phosphorescence under the UV lamp for approximately 20–25 seconds. (figure 2, inset), confirming synthesis by a CVD process. 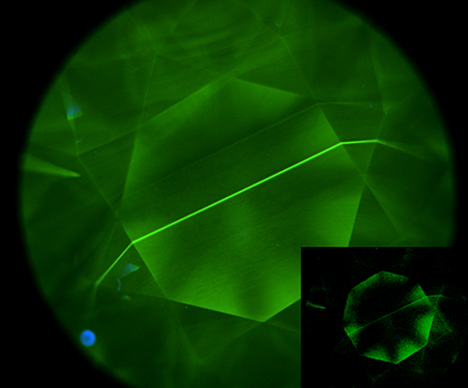 Figure 2. In the DiamondView, the 1.42 ct round showed striations typical of CVD growth. Notice the two parallel planes fluorescing stronger than the bulk of the crystal. The sample also showed moderate phosphorescence (inset), another indication of CVD growth. Images by Meenakshi Chauhan.

Upon removal from the DiamondView after approximately two minutes of exposure time, it showed a distinct grayish blue color. After exposure to a 100-watt halogen bulb for about three minutes, the synthetic diamond regained its initial color (figure 3).

Figure 3. The CVD synthetic diamond before (left) and after exposure (right) to the short-wave UV radiation of the DiamondView. Photos by Meenakshi Chauhan.

This process was repeated, and the sample turned a grayish blue color after a single minute of exposure to the short-wave UV radiation of the DiamondView and regained its initial color in approximately one minute under the halogen light.