A Fancy pink diamond, confirmed as natural-grown, was found to be type IIa and colored by
NV– centers. As part of routine testing, DiamondView fluorescence images were collected to check for synthetic growth features. These images showed unusual patterning in the form of two pink spots near the edge of the table facet (figure 1). Both spots were approximately 0.9 × 0.7 mm, and the table facet was approximately 3.0 mm in diameter. The orange fluorescence throughout most of the table was likely due to NV0 centers, whereas the pink components were likely due to NV– centers. 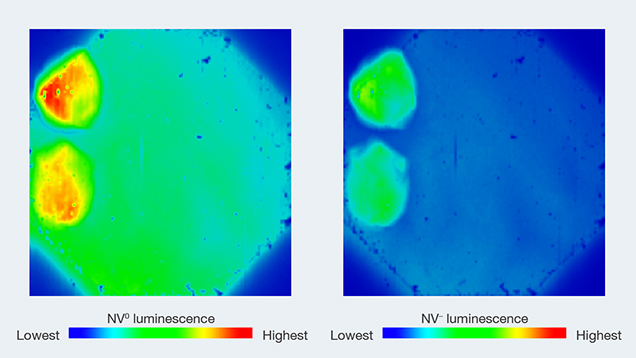 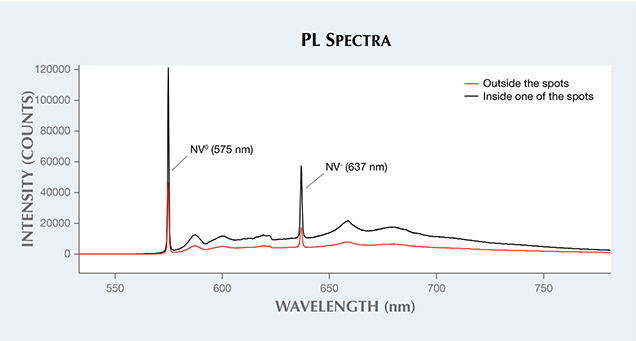 Figure 3. A comparison between average PL spectra from inside one of the spots and the area outside the spots. The y-axis scale is the same for both spectra, so it is apparent that the intensity inside the spot is higher for both NV0 and NV– centers.

To determine the vertical distribution of the NV– center, a 500 µm PL depth profile was acquired through each spot. This is an automated process the instrument can perform in which a series of spectra are collected along a line spanning the diameter of the spot. The stage is then offset 5 µm in the vertical direction to focus farther into the diamond, and another series of spectra are collected. The process was repeated 100 times until the target depth of 500 µm was reached. This achieved a depth profile of NV– luminescence, indicating how deeply the irradiation beam had penetrated into the stone. One spot showed an average penetration depth of 100 µm and the other 50 µm. It is important to note that this is axial displacement, which in confocal micros­copy is an approximation of the true depth of the illuminated feature. Nevertheless, this demonstrated the shallow penetration of the irradiation beam.

The intensity variation in the NV centers strongly demonstrated that this diamond was HPHT annealed and isolated nitrogen was subsequently introduced due to disaggregation of the A-form nitrogen (pairs of nitrogen atoms) or B-form nitrogen (four nitrogen atoms around a vacancy). It also indicated that this diamond was irradiated by a focused electron beam with relatively low energy (≤1 MeV) prior to annealing. These multiple processes introduced high concentrations of NV centers into the localized shallow areas. Furthermore, an increase of electron donor defects at the incident beam area would lead to the observed patterned distribution of the NV– centers. The narrow, focused nature of the electron beam is responsible for the distribution of the defects into the two spots and therefore the reason why the pink spots are observed in the DiamondView image. The two spots may be the result of two separate beams in the irradiation setup. Alternatively, the second spot may be from an additional round of treatment designed to further enhance the color. It is also unusual for the treatment to be done through the table rather than on the culet. It is unknown what benefits the focused beam will have over wide-beam irradiation.