Tanzanite is the violet blue to blue violet variety of the mineral zoisite. It is mined commercially only in one area of the world: the Merelani Hills of Tanzania, which is where it gets its name.

When blue-to-violet crystals were first discovered in Tanzania in the 1960s, no one
was quite sure what the new crystals were. Careful gemmological study determined
that they were a transparent variety of zoisite, and the gem came to be known as
tanzanite. - Jeff Scovil, courtesy Marcus Budil Collection
Tanzanite's appearance is influenced greatly by its pleochroism, which is the ability of a gemstone to show different colours when viewed in different crystal directions. Tanzanite's pleochroism was documented in scientific papers not long after its discovery. In 1969, American Mineralogist described the gem's pleochroic colours as `red-violet, deep blue, and yellow green'. Today, most gems are heat treated, which removes or reduces the yellow green or brownish pleochroic colour, maximising the blue and violet.

Top-quality tanzanite can be violetish blue -- similar to a fine sapphire colour -- or a unique, predominantly violet hue that is unique to it. Some stones might also appear more purplish depending on how the cutter chooses to orient the fashioned gem. Both the violet and blue pleochroic colours are readily visible in a fashioned stone when it is gently rocked and tilted. This means that every tanzanite is a blend of these pleochroic colours. The exact face-up colour depends on the inherent colour of the original rough, its size, the pleochroic colours the cutter favours when they orient the fashioned stone, and the light the finished gem is viewed under. Cool lighting -- such as daylight equivalent fluorescent -- will emphasise tanzanite's blue, while warm lighting -- such as incandescent light -- will make it appear more violet-to-purple.

Just like other coloured gemstones, vivid, strongly coloured tanzanites are highly sought after. Lighter-toned pastel hues are more plentiful and affordable than vivid colours and have a subtle appeal of their own. 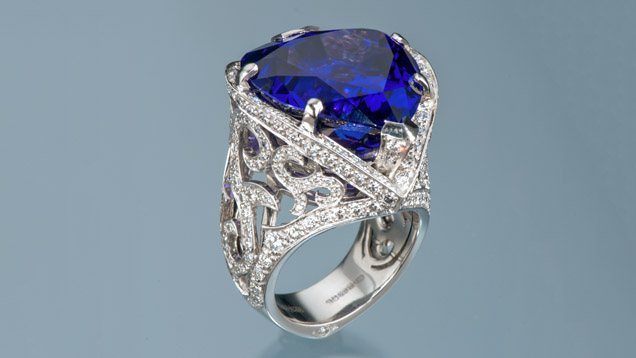