Figure 1. Fluid inclusion mimicking a snake in Yuanjiang ruby from China (left). The diagram on the right shows the details of this “snake.” Photomicrograph by Wenqing Huang; field of view 0.26 mm. 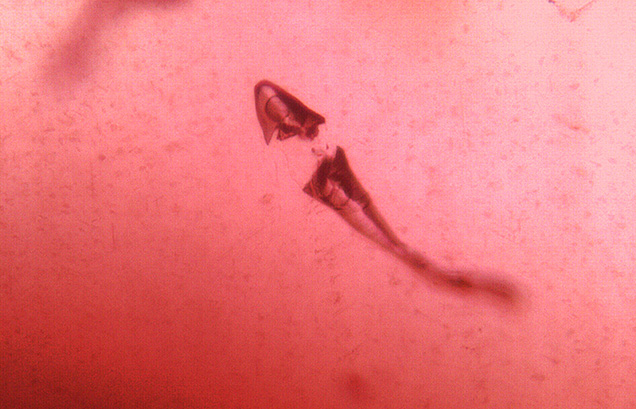 Two rubies from the Yuanjiang deposit showed several interesting fluid inclusions. The most impressive one strongly resembles a snake raising its head (figure 1). The other mimics a fish (figure 2). As shown in figures 1 and 2, the whole fluid cavity was split into two parts, both of which show a bubble. Raman spectroscopy analysis identified the transparent tabular crystals in the snake as diaspore (figure 1). The “snake” also hosted a solid inclusion of arsenopyrite (FeAsS); the needle on its head could not be characterized by Raman spectroscopy due to its fineness. The fluid composition was dominated by CO2 with minor components such as H2S, COS, and CH4, as revealed by Raman spectra and microthermometry. How these special inclusions formed has been speculated elsewhere (W.Q. Huang, “Fluid inclusion and titanite U–Pb age constraints on the Yuanjiang ruby mineralization in the Ailao Shan–Red River metamorphic belt, southwest China,” Canadian Mineralogist, 2021, accepted). This morphology-forming process has been explained by two mechanisms that evolved step by step. The first is morphological ripening that resulted in negative shapes of fluid inclusions; the second consists of subsequent reactions between the trapped H2O and the host corundum during the cooling of the inclusion, generating a diaspore that segregated the fluid completely.

Wenqing Huang (67019822@qq.com) is affiliated with the National Center of Supervision and Inspection on Quality of Gold and Silver Products at the Nanjing Institute of Product Quality Inspection in China.

Fluorescence is an integral part of diamond analysis that displays varying growth defects.

The micro-world of gemology is fascinating and often mimics scenery, landscapes, or, in this case, food.