The news from Lucara Mining, which found three huge diamonds – 1,111, 813 and 374 carats − all in the same week from the company’s Kerowe Mine in Botswana, brightened an otherwise lackluster diamond market.

Two of the diamonds are the second and sixth largest ever found.

All three will be sold in Antwerp early next year, according to Lucara. Given the enormous wealth some buyers are putting into major diamonds and colored gems, the buyer of the 1,111 carat (ct.) rough will likely go for the maximum final cut size, striving to exceed the 530 ct. Cullinan I, the world’s largest colorless diamond that is a centerpiece of the British Crown Jewels, and the 545 ct. Golden Jubilee, a yellowish brown diamond in the Crown Jewels of Thailand. The final cut, of course, will depend upon whether the inclusions and fissures within the stone will permit such a large stone.

The enormous wealth being spent on top diamonds was evident at recent Sotheby’s and Christie’s auctions. As reported around the world, a Hong Kong businessman, Joseph Lau, paid a world record of $48 million for a 12.08 ct. Fancy Vivid blue diamond – at $4 million per carat, it was also the record per-carat price ever paid for a gemstone. The day before, he paid $28.5 million for 16.08 ct. Fancy Vivid pink diamond. 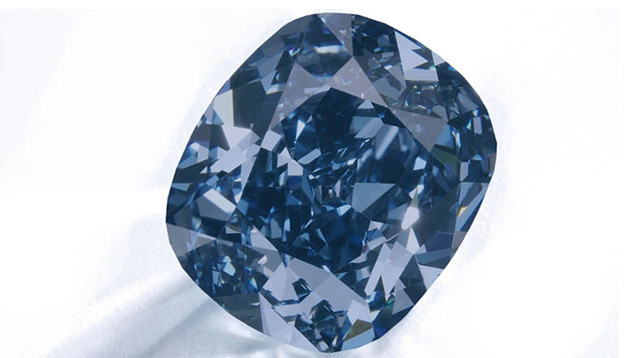 The $48 million Blue Moon Josephine, a 12.08 ct.  Fancy Vivid blue, has become the most expensive gemstone ever sold at auction. Its $4 million per carat price exceeded the previous record by $1 million. Photo courtesy Sotheby’s

Lau named both diamonds, which were graded by GIA, after his daughter, Josephine. Last year, he paid a record-breaking $32.6 million for a 9.75 ct. Fanvy Vivid blue diamond and named it Zoe after his other daughter.

In the more commercial side of the diamond market, major diamond producers have trimmed rough sales way back as the industry continues to grapple with high inventories, diminished credit and stagnant demand.

De Beers’ Dec. 7-11 sight is expected to be a repeat of November’s $70 million allocation – the smallest since the world financial crisis in the fall 2008. De Beers has reportedly returned to deferring purchases from its own mining partners, in particular Debswana, a practice it has not done in 20 years, when Russian diamonds were flooding the market and depressing prices for smaller stones.

Alrosa, the agency that mines and sells Russia’s diamonds and Rio Tinto, which owns Argyle Diamond Mine in Australia and a majority share of Diavik in Canada, have instituted provisions that allows their clients to defer purchases.

Alrosa rough diamond sales volume fell 42% short of its plan for the third quarter of the year, according to a company statement. The decline was especially steep in September, when the company not only slashed prices 8%, but also allowed its clients to defer up to 50% of their purchases. The company, which held its prices in October, had forecast $5 billion in revenues for the year, but analysts believe actual sales will come in about $3.6 billion.

The company’s diamond production totaled 23 million carats through the third quarter, down 5.8 million carats from the same period of 2014. But revenues-per-carat sales were 3.5% higher, indicating that Alrosa was concentrating its sales into larger goods and stockpiling the smaller goods. 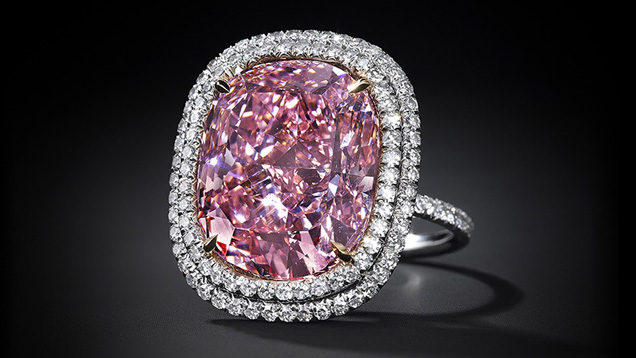 Jewelry demand in the U.S. is growing, though slowly this year. According to U.S. Department of Commerce data, sales of fine jewelry increased 4.8% in September, over the same month last year. Much of that increase went to online sellers, which include brick and mortar retailers who have an e-commerce division.

Retail analysts are expecting jewelers to discount heavily during holiday sales, even as they predict a respectable season. Price cutting began early with one major department store, Macy’s, advertising 30% off on engagement rings during the holiday season.

Blue Nile, the leading online diamond seller, has scaled back its sales growth estimates for 2015, expecting its yearly sales to total between $488 and $498 million, instead of the originally forecast $505 million. Last year’s total sales were $473.5 million. The company is basing its new forecast on a third quarter sales increase of 4%.

Worldwide, demand from luxury watches plunged 12% in all major markets in October, compared to the same month last year. The Federation of the Swiss Watch Industry reported: sales to Hong Kong fell 39% to $258 million; exports to the U.S. declined 12% to $232 million; and orders from China declined 5% to $120 million. Exports to other European countries were down by 4% to 5%.