Bands and athletic teams have their booster clubs and public radio its donor circles, but few organizations can claim a supporter as engaged and encouraging as the “Pearl Goddess” Betty Sue King.

King, founder of the wholesale firm King’s Ransom and a former board member of the American Gem Trade Association, is a longtime supporter of the GIA Alumni Association. She’s participated with alumni on multiple trips to pearling sites throughout the world, lectured regularly at chapter meetings across the country, and contributed many parcels of pearls to the GIA Alumni Association’s annual auction at the Tucson gem and mineral shows for years.

“I’ve been a long-standing participant in the Golden Gate GIA Alumni Association chapter even though I’m not a Graduate Gemologist,” she says. “I support the value of the education that GIA offers, and value the guidelines, information and services the Institute provides to the industry.”

Suzanne Martinez, GG, a longtime member of the Golden Gate chapter and a friend of King’s, and calls her “an industry leader who walks her talk.”

“She believes in the value of continuing education, that it’s something to participate in and share with others,” Martinez says. “She has been a huge support to our chapter, not only by regular attendance of our meetings, but through generous contributions to the alumni scholarship auction in Tucson.”

King notes that countless people have also “generously shared their expertise and referrals” with her throughout her own career. “The richness and welcoming quality of the GIA Alumni Association makes it an excellent place to give and receive support and have opportunities for field education, networking and nurturing friendships in the gem and jewelry industry,” she says. 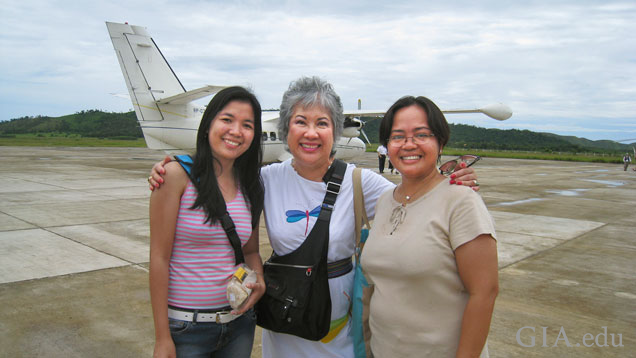 “My quest for pearl treasures on overseas buying trips is my favorite part of my career,” says King, pictured with Jewelmer’s Cheryl Campos and Reza Tumbado on a trip in the Philippines. “I never tire of discovering endless varieties of pearls, and friendships developed through the years with clients, suppliers and people in the industry are dear to my heart.” Photo courtesy of Betty Sue King

King has an ethereal nickname, but it belies her real-world grounding. She’s the daughter of first-generation immigrants from mainland China, “caring, loyal and dedicated” parents who owned a small specialty grocery store in New York City before heading West with their children.

“All seven of us packed into a Packard sedan and crossed the nation, from New York City to San Francisco, before ultimately settling in Phoenix, Arizona,” she says. “I remember many stops along the way, taking in the sights and flavors of the country. Travel and adventure became a part of my world at a young age.”

So, too, did an appreciation for jewels and design: she loved the 24K gold and jade jewelry she inherited from her parents as a young girl, and had an “innate, aesthetic appreciation of diamonds, pearls and jewelry.” She first dreamed of a career in fashion design but decided to pursue teaching.

After college graduation, King taught at a San Francisco middle school by day; by night (and weekends) she worked as a freelance food, makeup and location stylist. Even her school lunch hours were used to make client phone calls.

“I was burning the candle at both ends, and in the middle,” she says.

After a large round of layoffs in her school district took her out of teaching, a friend in the diamond and estate jewelry business noticed her affinity for jewelry and offered her an opportunity to wholesale diamonds and colored stones.

“I knew I’d turned a page,” she says of the transition, which called upon skills she had learned as a child. “My family was entrepreneurial and we did everything as a team to run the family business. It was a way of grounding our life in integrity, and I appreciate those experiences in my heritage – it’s how I instinctively created my own business.”

"I examine countless parcels of loose pearls and strands seeking special characteristics such as intense color saturations, deep purple and blue and hues with metallic overtones," says King, who was invited to attend the first Edison Pearls new release and global auction in China. Photo courtesy of Betty Sue King

King ultimately decided to focus on cultured pearls and swapped the title “owner” for “Pearl Goddess” on her business cards – a move that she says “charmed and enchanted” her clients.

“For more than four decades, I’ve been immersed in the jewelry industry, where women are an integral part of the business,” says King, a recipient of the Women’s Jewelry Association Award of Excellence. “For the most part, I’ve been welcomed and respected … it’s a global world of ethnicity where every flavor and culture work and thrive together.”

Her sourcing and lecturing work often take her far beyond her company’s Sausalito, California headquarters.

“My quest for pearl treasures on overseas buying trips is the best part of my career,” King says. “I never tire of discovering and acquiring endless varieties of pearls in all nuances of beautiful hues.” 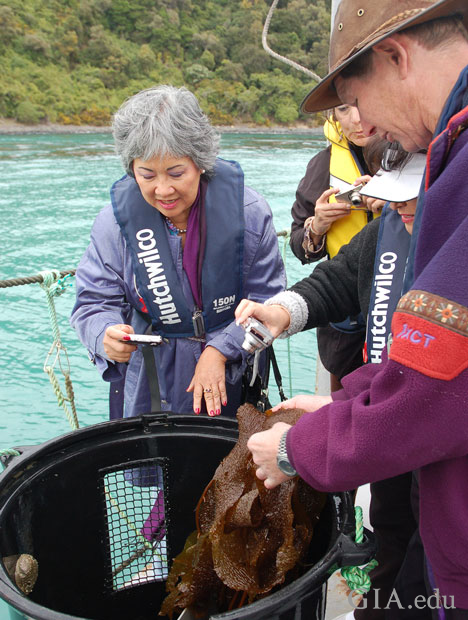 King, snapping a photo as Roger Beattie, who started the first ocean-based cultured blue pearl farm in New Zealand in 1989, separates seaweed from abalone. King went with the GIA Alumni Association on its alumni trip to pearl locations in Tahiti, New Zealand and Australia in 2007. Photo by Akira Hyatt/GIA

Some of King’s most recent work is focused on helping gem and jewelry professionals make connections between their business practices and the health of the planet.

At a recent meeting of the GIA Alumni Association’s San Diego chapter at the Institute’s Carlsbad world headquarters, King presented a lecture titled, “Beyond the Pearl: Climate Change, Consequences, Communities.”

“Gemstone mining and jewelry production lectures have addressed environmental issues of land degradation, chemical use and disposal, water quality and effects on wildlife,” she says. “Most industry lectures discuss changes in production, gem identification, evaluation – i.e., the product. My presentation focuses on concept and process.”

Ever the teacher – and optimist – King looks forward to helping to educate and inspire others in the industry to take positive action.

“Global warming and climate change are universal, worldwide concerns occupying center stage for all forms of life,” she says. “I feel the value of bringing awareness of the affects it has on pearls is of immense importance.”

The Lure of American Freshwater Pearls: Revisiting the Latendresse Family

The exciting array of pearl choices available today can be overwhelming. Before you set off to buy pearl jewelry, be sure to understand the basics.