Alrosa, Russia’s diamond mining and marketing arm, auctioned more than 250 polished fancy colored diamonds for $9 million at a tender sale during the September Hong Kong Gem and Jewellery Fair. While the auction was important, even more significant is that it demonstrates that this once-aloof diamond producer is asserting itself into the world diamond market.

The company, the largest diamond producer by volume and second largest by revenue in 2017, publicized the sale well in advance and signaled that it plans to become more involved in diamond marketing in the future – and become the world’s major source for fancy colored diamonds.

Alrosa took the unusual step of inviting members of the trade and media to view its colored diamond collection in a meeting room in a floor above the show. In the past, it kept sales low key, inviting mainly its own clients to bid on rough and polished diamonds without outside publicity.

Evgeny Agureev, director of Alrosa’s United Selling Organization, the division that sells productions of all of Alrosa’s mines, said this was the first of what will be yearly or twice-yearly auctions of diamonds that “fill the fancy colored diamond gap” after Australia’s Argyle mine closes in 2020 or 2021. He added that the company also is looking into establishing a Russian brand for its diamonds, though those plans remain “very preliminary.”

For many years, Alrosa was a passive, though major, seller of rough diamonds. Like De Beers, it sold its rough through a network of selected clients (Alrosa Alliance) in a series of 10 sales each year, but did little to stimulate demand downstream. The company rarely participated in or contributed to industry marketing initiatives until three years ago when it joined the Diamond Producers Association (DPA). Alrosa only began to contribute in a big way to the DPA last year when it kicked in $25 million, more than one-third of the group’s total marketing budget of $70 million.

Alrosa has also opened new sales offices in New York, where it plans to auction 80 large diamonds later this year, and expanded operations in its other markets.

The highlights of the Hong Kong auction were an 11.06 ct Fancy Deep purple pink that carried a reserve of $3.3 million and a 15.11 ct Fancy Vivid orangy yellow that had a minimum bid of $1.2 million. There were 146 other fancy colored diamonds ranging in weight from just over 1 ct to 26 carats, carrying a total reserve price of $10.3 million. The majority of these were yellow, with some modified by orange or brown. Among the smaller diamonds, there were 48 fancy colored pink diamonds, most weighing between 0.3 ct to 0.5 ct. Several other lots featured smaller goods down to melee sizes in various shades of yellow. Of the 250 diamonds offered, 210 were sold. 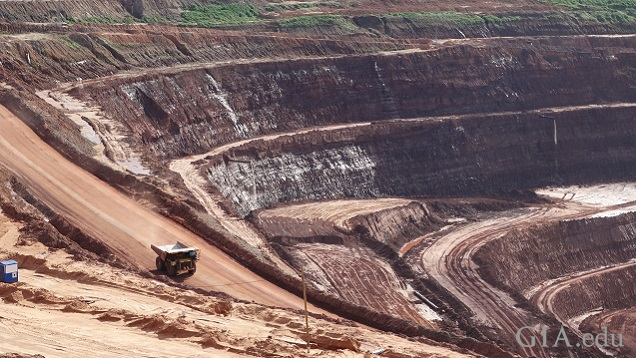 Agureev noted that Alrosa produces 7,000 to 10,000 carats of fancy colored diamonds each year.

A majority of these fancy colors were extracted from Almazy Anabara, an alluvial operation in northwest Yakutia. An increasing number come from the newly developed Lomonosov deposit in the western portion of the country near the border with Finland. GIA reported on this deposit in the Summer 2016 issue of Gems & Gemology.

Alrosa polishes these diamonds instead of auctioning them as rough in hopes of getting better prices, said Agureev, who noted that Alrosa will polish a larger percentage of fancy colored and “special” (colorless over 10.8 cts in the rough) in the future.

“All of these diamonds were polished in our Moscow facility, where we also do our large (colorless) goods,” he said. “It is more costly [to cut diamonds there] but these goods are much less sensitive to labor costs.”

The 11.06 ct Fancy Deep purple pink diamond came from a 27.27 ct rough and took five and one-half months to process from mine to auction, according to Alrosa’s cutter. He said, in a booklet accompanying the diamond, that he needed to polish 36 millimeter-sized “windows” into the mottled surface of the rough to examine the interior of the stone.

The tender sale was well-attended through the entire show, but the final day was cancelled because of Typhoon Mangkhut, which struck Sept. 16 causing some potential buyers to miss the sale.

Alrosa also auctioned 28 polished colorless diamonds over 5 carats, the highlight being a matched pair of E color round brilliants, weighing 5.18 and 5.19 cts, respectively.

Geology and Development of the Lomonosov Deposit

Review diamond discoveries at Russia's Lomonosov deposit, as well as the geology of the Arkhangelsk kimberlite province.