It’s well known that jadeite can be shaped into different jewelry styles such as bracelets, rings, cabochons, and more, but China’s cutters also process this material into larger-scale decorations. These decorations are called “Shan Zi” in Chinese. “Shan” means hills or mountains, indicating that the jadeite was carved to preserve its original outline and shape. Compared to other methods, Shan Zi is probably the most natural way to process jadeite rough, but it is also the most expensive and time-consuming process.

Small pendants, decorations, and bracelets are typical products for the jadeite market. Photo by Eric Welch, ©GIA, courtesy of Mazu Jade Articleco., LTD
Carvers need relatively large materials with ideal outlines for carving Shan Zi. The rough was hard to find and transport, and multiple carvers had to work together for long periods of time to design and carve an individual piece. In the past, only the royal family or extremely rich people could afford Shan Zi, especially the largest carvings. The result is that, along with its use as decoration, Shan Zi is also a symbol of wealth and power. 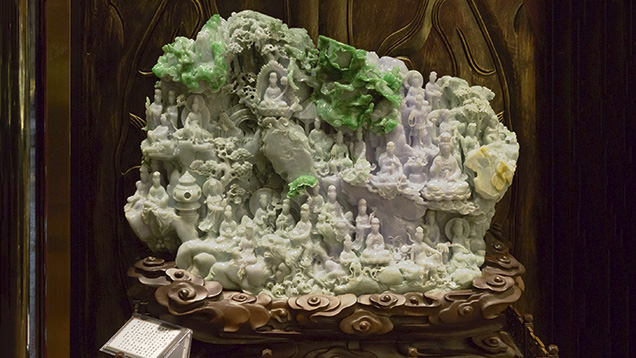 This is a typical jadeite Shan Zi. The piece preserved the original shape and outline of the rough. A Shan Zi is usually carved in three dimensions. Its large size is impressive, even when viewed from a distance. Photo by Eric Welch, ©GIA, courtesy of Mazu Jade Articleco., LTD
Common Shan Zi themes include scenic views, plant life, traditional symbols, ancient famous paintings, and more. The choice of theme depends entirely on the shape and outline, and sometimes the color, of the rough material. The planning process and tools needed for 3-D carving originated with the carving of nephrite, as did theme selection. 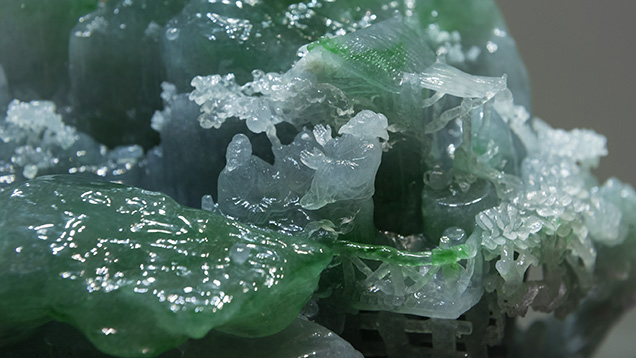 In June 2013, a group of GIA staff members visited one of southern China’s jadeite hubs. In Sihui, the authors were introduced to Mr. Zheng, the president of Mazu Jade Articleco., Ltd., and his close friend Mr. Fang, the president of Jingyu Mantang jadeite carving workshop. These two gentlemen warmly welcomed us and hosted our visit and showed us one of their ongoing carving projects.

They obtained the jadeite they were working on in 2004, at a public auction in Myanmar. It was separated from an even bigger jadeite boulder. They were not able to get the other half, which remained in Myanmar. The boulder they brought back weighed about eight tons, and they cut it into two pieces. One is now being carved to make a huge jadeite Shan Zi. The other part was further divided into three pieces to be carved into the three Chinese gods: Fu, Lu, and Shou. 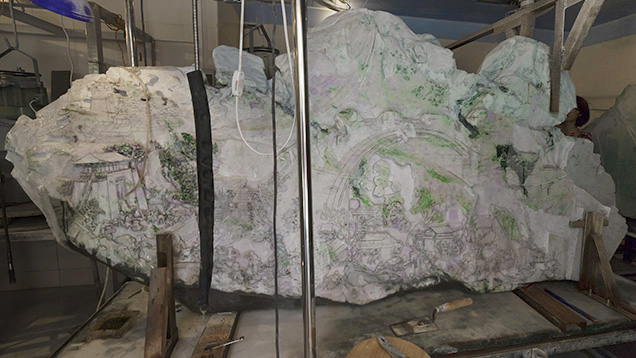 Workers designed a special platform for this Shan Zi. The platform allows three carvers to work on the same side at the same time. The pencil sketch and some carving work have been completed. Photo by Eric Welch, ©GIA, Courtesy of Jingyu Mantang Jadeite workshop
When they purchased the rough, it had dark skin and a small window. When they brought it back and cut it open, they knew that they had won the auction gamble. The entire piece is full of purple and green colors. They built a special working platform to accommodate the three-ton segment along with the carvers. It will be carved into a jadeite Shan Zi. Mr. Fang told us that, to their knowledge, this is probably the largest jadeite Shan Zi in Asia.

Mr. Fang also pointed out that they would have profited more if they had used this material to make bangles, since bangles with full green or purple colors are usually worth several million RMB each. They could have produced a large number of bangles from this giant piece of rough. The reason they decided to make it into a Shan Zi was that, as an artist, Mr. Fang had always dreamed of finishing a masterpiece in his lifetime and both gentlemen sensed that this might be the opportunity to do it.

Mr. Fang is the chief designer of the piece. Working along with two other designers and six highly skilled carvers, it will probably take about five to six years to finish.

When asked about his design inspiration, Mr. Fang became very excited. This rough sat in the workshop from 2004 to 2010 because he could not find a suitable theme to base its design on. Then, in 2010, he attended the Shanghai Expo. In the China pavilion, he saw an amazing 3-D dynamic painting called Qingming Shanghe Tu (Along the River During the Qingming Festival). The 3-D painting inspired Mr. Fang, and he returned to Sihui the same day to plan the execution of this theme on his jadeite rough. 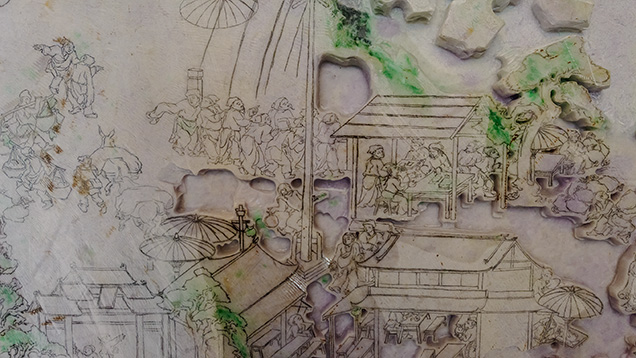 The original painting is full of people, which makes some of the carving detail extremely complicated. The finished product will show not only people’s individual facial expressions, but also the details of their clothing and even the jewelry they wear. Photo by Eric Welch, ©GIA, Courtesy of Jingyu Mantang Jadeite workshop
The original painting, Along the River During the Qingming Festival, is attributed to the great Northern Song Dynasty artist, Zhang Zeduan. It is 528 cm long and 24.8 cm high. It shows active scenes of life in Bianjing, the capital city during the Northern Song Dynasty. From 960 to 1279, China was the most developed and powerful country in the world. Mr. Fang loved the idea of using his favorite jadeite rough to represent the most prosperous period in China’s history. Since the original painting was too long to fit this jadeite, he decided to use its most eye-catching parts. The two main scenes are the city gate and the bridge.

The visiting team was shown the pencil sketch on the jadeite and some parts that have been worked on already. Mr. Fang also showed us the back of the rough, which will also be carved to represent parts of the painting.

In the room next to the workshop, progress was being made on the carving of the three gods: Fu, Lu, and Shou, made from a portion of the same rough material. The first pencil sketch has been finished. Mr. Fang pointed out that the design might be changed here and there as work progresses because jadeite color distribution is very complex and it can change within centimeters. 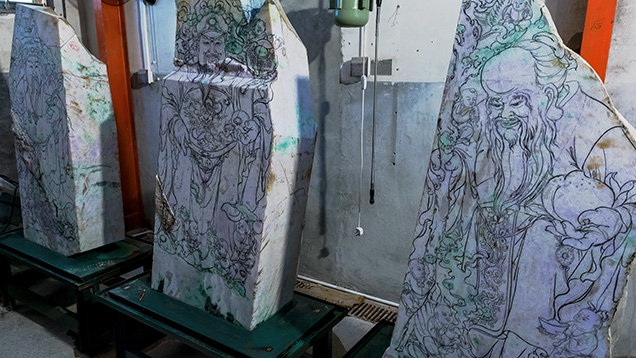 Part of the rough was divided into three pieces to carve the three gods, Fu, Lu, and Shou. Large statues like these are very rarely seen on the market. Photo by Eric Welch, ©GIA, Courtesy of Jingyu Mantang Jadeite workshop.
In Chinese culture, Fu is the god of happiness and good luck, Lu is the god of fortune and social class, and Shou is the god of longevity. Decorations with these three as the theme can be seen everywhere and are made of a variety of materials, including china and wood. In the past, almost every family had a set of the three in different formats or materials. According to Mr. Fang, the sizes of these carvings of the gods make them extremely rare. Also, the material being used is of abnormally high quality. This is another dream project he is working on at the same time as the main carving. 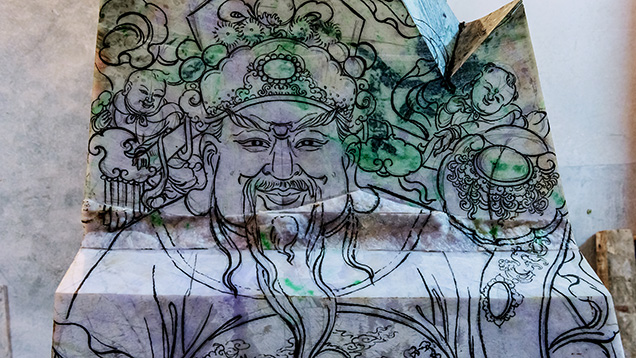 Mr. Fang’s full name is Xingchun Fang. He was born in 1975 in Putian, Fujian province, which is a town that’s famous for its wood carvings. Mr. Fang began learning wood carving when he was very young. This gave him a very solid base in the art and led him to the world of jadeite carving later in his life.

Mr. Fang arrived in Sihui as a 17-year-old in 1992. He started his jadeite carving career as a worker in various workshops. He practiced jadeite polishing and simple carving techniques every day. Many people felt that the job was too boring and left, and Mr. Fang was one of the very few who stayed.

After a year or so, he opened his own small business, carving small pendants for dealers to sell. Although small pendants were the mainstream products on the market back then, Mr. Fang felt that it was not what he wanted to do as an artist. Finally, he successfully persuaded a dealer to let him make a small-scale 3-D Shan Zi for him. The dealer sold the product and made a good profit. This inspired more dealers to ask Mr. Fang to make large jadeite carvings for them.

With the development of his own business, Mr. Fang gradually gained the purchasing power to buy his own jadeite rough. After experiencing ups and downs, he finally got the business on the right track. In 2003, he started to collaborate with Mr. Zheng from Mazu. Mr. Fang was in charge of design. During their collaboration, Mr. Fang created many award-winning masterpieces that helped Mazu gain its fame and status in Sihui as the best jadeite carving company. 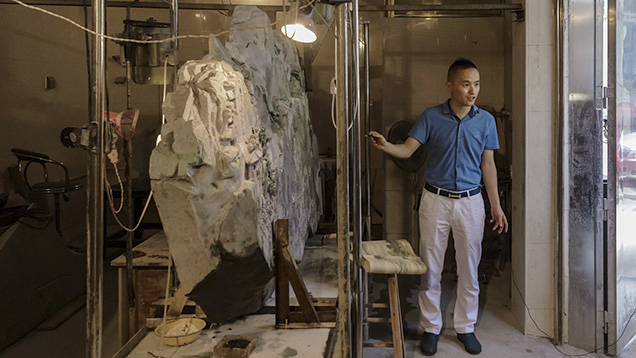 Mr. Fang introduces the ongoing project to the visitors from GIA. Photo by Eric Welch, ©GIA, Courtesy of Jingyu Mantang jadeite workshop
Although Mr. Fang left Mazu to form his own company, Jingyu Mantang, his friendship with Mr. Zheng never ended. Now Mr. Fang is heading toward his next dream: to turn his company into a museum of high-end jadeite carving and to attract the most skilled carvers from all over the country to come and work together.

As a successful young jadeite carving artist, Mr. Fang has always kept in mind that to become a great jadeite carver, one should have the same strong properties as jadeite. He also believes that there is a subtle connection between him and jadeite, and between him and his friends who share the same interests and passion.
About the Authors

The authors gratefully acknowledge the assistance provided by Mr. Wenshui Zheng and Mr. Xingchun Fang during our visit in Sihui. We would also like to thank Miss Shumin Cao and Mr. Qinghong Guo from Guangdong Gemstones & Precious Metals Testing Center for introducing us to local industry leaders and providing us with ground transportation. Special thanks go to Miss Kiki Ho from Guangzhou Jewelry Chamber of Commerce, who acted as our interpreter in Guangzhou.