More than $1.1 billion worth of extreme top-end diamonds, colored gems and jewelry were sold at auction by the world’s most renowned houses in 2017. While sales results at the two main auction houses, Christie’s and Sotheby’s, were strong, buyers were discerning, especially in the second half of the year when a number of important lots went unsold.

Christie’s sold $556.7 million worth of jewelry worldwide, $8.9 million in online auctions. Sotheby’s did not formally announce its yearly jewelry sales, but a tally of sales from the company's website totaled about $552 million.

The biggest news was the April 4 sale of the Pink Star diamond by Sotheby’s Hong Kong, which set a world price record for a gemstone at auction. The 59.60 ct Fancy Vivid pink Internally Flawless stone was the largest diamond of those grades ever graded by GIA and achieved the record price of $71.2 million. The buyer was Chow Tai Fook, the large Hong Kong-based retail jewelry chain. 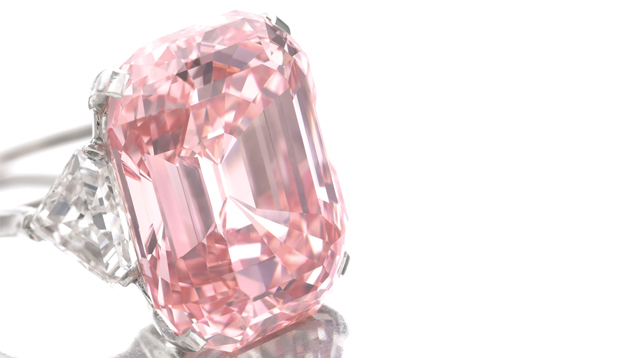 The 24.78 carat, Fancy Intense pink, Graff Pink diamond sold in 2010 for more than $1.8 million per carat, which was more than the price per carat sale of the Pink Star in 2017. Photo courtesy of Sotheby's.

While the diamond set a record, it had been sold by Sotheby’s nearly two years earlier for over $83 million. The buyer, however, was unable to come up with the purchase price, obliging the auction house to buy it in for a reported $70 million.

The Pink Star’s record price, however, was a relatively low $1.2 million per carat, which was less than half the per carat cost of similarly graded diamonds offered at auction in recent years. For example, the 24.78 ct Graff Pink sold in 2010 for more than $1.8 million per carat, and the 14.93 ct Pink Promise sold this year for $2.13 million per carat. 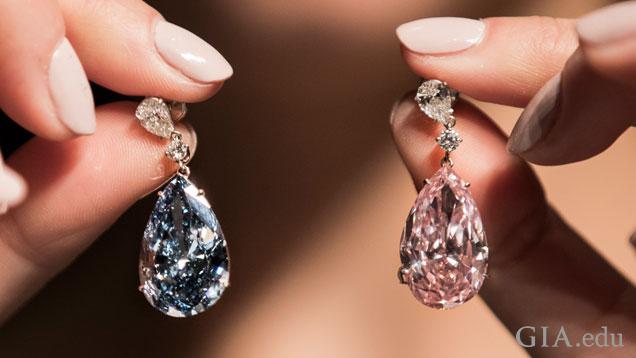 The Apollo and Artemis diamonds, twin fancy colored diamonds of 14.54 cts and 16 cts, respectively, sold for $57 million at Sotheby’s Geneva auction in May. Photo courtesy of Sotheby’s

The highest bids throughout the year went, as usual, to large fancy colored diamonds – mostly pink and blue. Both colors were represented in a $57.4 million earring set offered by Sotheby’s at its May 16 auction in Geneva. The 16 ct Artemis Pink, a GIA-graded Fancy Intense pink, sold for $15.3 million, while the 14.54 ct Apollo Blue, a GIA-graded Fancy Vivid blue, went for $42.1 million.

The Pink Promise, a 14.93 ct Fancy Vivid pink diamond sold for $32.16 million at Christie’s Nov. 28 Hong Kong sale. Interestingly, the GIA-graded diamond had been recut from a 16.1 ct Fancy Intense pink. The seller, New York dealer Stephen Silver, told CNN after the sale that he wanted to improve the color grade of the diamond that had been first cut about 15 years ago. 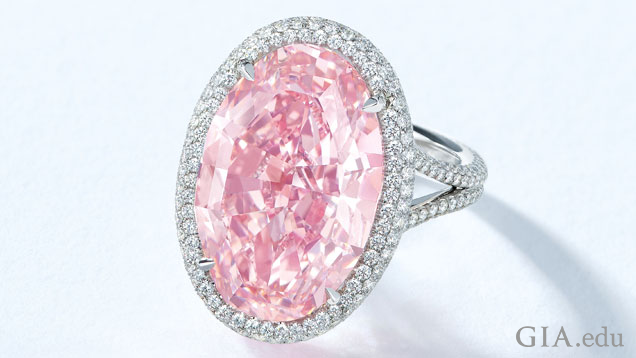 Christie’s chairman for Europe and Asia, Francois Curiel said it was a strong year overall.

“Trade buyers were more active this past year, but both private collectors and dealers were consistent, active bidders,” he said. Asian buyers remained the “dominant force” in buying top gems, he said, noting that world events, such as the surge of Bitcoin and the unsettled currency markets from Brexit, have not had any noticeable effect on the auction market.

Other fancy colored diamonds sold this year include:

And, wrapping up the year, an anonymous buyer paid $15.1 million for a 5.69 ct GIA-graded Fancy Vivid blue diamond at Sotheby’s Dec. 5 auction.

Major colorless diamonds were scarcer on the auction block this year, but two notable gems were sold: 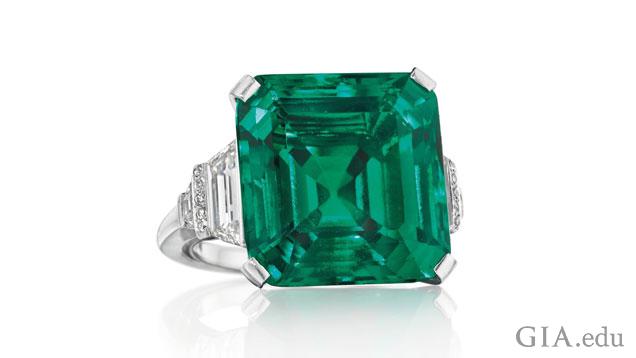 Provenance, along with a lack of inclusions, helped the 18.04 ct Rockefeller Emerald achieve a record per-carat price of $305,000 at Christie’s New York auction in June. Photo courtesy of Christie’s Images

Jade always tops the gemstone bill at the Hong Kong auctions and, in November, a buyer at Christie’s paid $12.3 million for a jadeite bead bracelet accented with diamonds and a small ruby.

Buyers weren’t in the mood to take everything. The 37.3 ct Fancy Intense pink Raj Pink diamond, offered by Sotheby’s at its November Geneva sale, failed to sell. Bidding started at $10 million, but halted at $14 million, less than half of the high pre-sale estimate. Also, Sotheby’s promoted a 110.92 ct L color VSI clarity diamond as the largest round brilliant ever to come to auction at the Dec. 5 New York auction, but the diamond did not find a bidder willing to meet its pre-sale estimate of $4.2 million.

The Raj Pink, a 37.30 carat GIA-graded Fancy Intense pink diamond did not sell at Sotheby’s November Geneva auction. The stone displays a strong, unmodified pink color and is said to be the largest known Fancy Intense Pink diamond in the world. Courtesy of Sotheby’s

Royal provenance is not a key to an automatic sale. Sotheby’s offered two Fancy Intense yellow diamonds, 102.54 cts and 82.47 cts respectively, at its Nov. 15 Hong Kong auction with a pre-sale price estimate of $9-14 million. The pair of diamonds had belonged to La Pavia, Countess Henckel von Donnersmarck, who in 1851 was married briefly to a Portuguese titled family. La Pavia was a courtesan and hotelier in Paris who eventually married Count Guido Henckel von Donnersmarck, a Prussian industrialist. The diamonds previously sold to a collector for $8 million in 2007, but failed to find a buyer at this sale.