Figure 1. Left: The two sections of the larger “boulder” were glued together to show the original size and form of the 2 kg imitation tourmaline rough. The length of the boulder was approximately 16 cm. Right: The boulder was cut, revealing the metal bar insert. Photos by Emanuele Costa.

Recently, RAG Gemological Laboratory in Turin received two “boulders,” weighing approximately 2.0 and 0.7 kg, reported to be rubellite tourmaline rough from Madagascar. The larger one was cut into two parts and found to be a resin imitation made heavier using a metal bar insert (figure 1). The smaller one was half of a boulder, again containing a metal insert. The resin matrix was colored bright cherry red and clearly noticeable in direct sunlight or using a small handheld light. The external appearance of both specimens was that of alluvial boulders that had floated and eroded over a period of time in riverbeds. The surface of each was rough with pits and fissures, and the voids were filled with material with an ochre appearance, very similar to clay and soils (figure 2). Due to the specimens’ mass, the authors could not use an immersion balance, so an approximate density was determined by weighing the two parts of the larger boulder and weighing the corresponding amount of water displaced by immersion. The density was about 2.9, close to the specific gravity of natural rubellites (3.0–3.2).

Figure 2. Details of the imitation boulder’s surface, with pits, cavities, and fissures filled with a clay-like material. Photo by Emanuele Costa.

During an examination of a thick slab (about 1 cm) taken from the larger boulder using a circular saw with a diamond blade, different phases of preparation of the boulder imitation were observed. These stages were suggested by the presence of differently colored resin blobs around the metal bar, enveloped by the outermost portion of plastic material with a more intense cherry red color (figure 3). The resulting product was probably scarred on the surface, tumbled, and finally immersed in a mix of mud and clay. Infrared (IR) spectroscopy investigation indicated the material was styrene-based resin, with a phthalate compound added for hardening. The resin was very similar to that used for fiberglass preparation, and it is easily found on the market. The metal insert, analyzed with EDS, was ordinary lead. 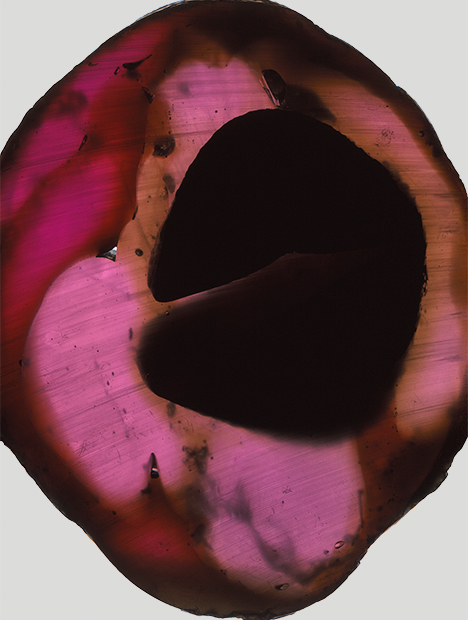 Figure 3. A transparency scan of an imitation boulder section; the black region is the metal insert. Color changes in different areas of the boulder suggest a multiple-step preparation involving various resin batches. The resins may have been worked in a semifluid or solid but malleable form, because some lack of adhesion—and the creation of voids—is noticeable. Photo by Emanuele Costa.

Many features easily distinguished these imitations from natural rubellites. The surface hardness was very low, and the resin used for the imitation partially melted at a relatively low temperature; therefore, a hot needle was enough to confirm the organic character of the mass. Acrid and pungent smoke was released when the hot needle made contact with the red-hot metal. Moreover, the plastic mass contained air bubbles (figure 4) that were easily seen from a smooth portion of the surface when using a loupe with intense illumination. 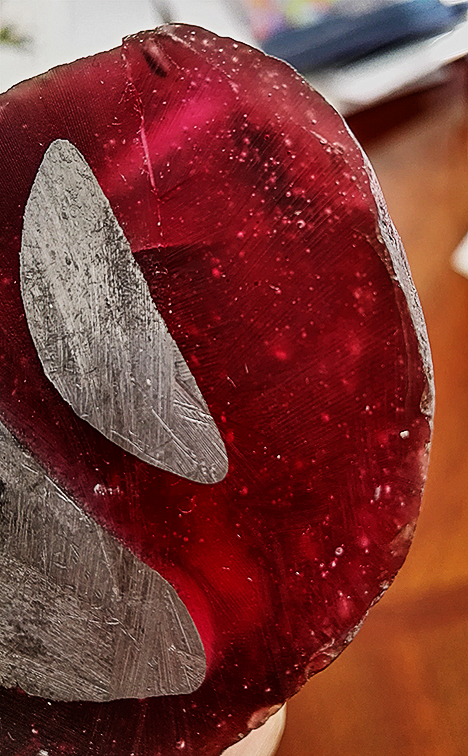 These tests are not easily managed in the field, however. The provenance of these boulders was most likely Madagascar, but no other reliable information was provided. Such boulders are rumored to have been mixed in with batches of natural rubellite boulders from alluvial deposits. Such imitations, especially if wet and muddy, could go unnoticed and increase the total weight of a rough stone batch.

Dr. Costa (emanuele.costa@unito.it) is researcher and professor in biomineralogy and environmental geochemistry in the earth sciences department at the University of Turin, Italy. Raffaella Navone is with the RAG Gemological Laboratory in Turin.