The quality and size of near-colorless and colorless synthetic diamonds grown by chemical vapor deposition (CVD) have rapidly improved in recent years due to advances in growth techniques and the introduction of post-growth decolorizing treatments. Near-colorless CVD synthetics have now passed the three-carat threshold. In September 2015, a 3.09 ct sample (I color, VS2 clarity) of unknown provenance was submitted to HRD Antwerp. This was preceded by Pure Grown Diamonds’ announcement of a 3.04 ct synthetic (I color, SI1 clarity) in December 2014.

The 2.51 and 3.23 ct round brilliants received H and I color grades, respectively. Microscopic examination revealed pinpoint and black inclusions in both, while small fractures along the girdle were only observed in the 2.51 ct round (figure 2). The 3.23 ct synthetic contained a small black inclusion measuring approximately 125 µm. As a result, SI1 and VS2 clarity grades were given to the 2.51 and 3.23 ct samples, respectively. Both revealed irregular stress patterns with high-order interference colors when viewed under cross-polarized light (figure 3), indicating high levels of strain.

The synthetics showed weak orange fluorescence to conventional short-wave UV and were inert to long-wave UV radiation. Exposure to the deep UV radiation ( 230 nm) of the DiamondView revealed an overall strong red-pink fluorescence attributed to nitrogen-vacancy centers with dislocation bundles that fluoresced violet-blue (figure 4), followed by weak greenish blue phosphorescence. Both samples were characterized by a layered growth structure, suggesting that the crystals were grown using a multi-step technique to maximize their volume. The sharp boundaries between the different growth layers are a result of changes in the fluorescent impurity uptake during the starting, stopping, and restarting of growth. These images clearly revealed that at least five growth layers were applied to produce these large crystals. The patterns suggest that the table of the 2.51 ct samples was cut parallel to the growth layers, while the table of the 3.23 ct synthetics was cut at an angle to the growth layers. The dislocation bundles are seen to propagate through the different growth layers. The formation of the two blue bands of highly concentrated dislocations crossing the table of the 2.51 ct specimens is not understood. 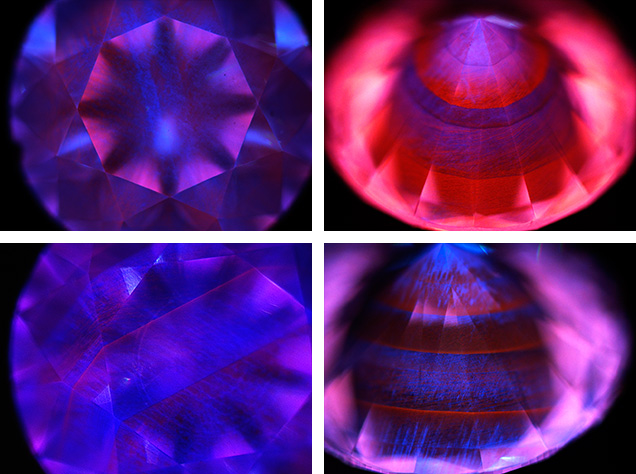 Figure 4. DiamondView imaging of both samples revealed strong red-pink fluorescence superimposed with dislocation patterns that fluoresced violet-blue. A layered growth structure indicating start-stop growth was clearly observed on the pavilion of both. The orientation of the layers reveals that the 2.51 ct sample (top) was cut with its table approximately parallel to the growth plane, whereas the layers intersect the table facet in the 3.23 ct sample (bottom). Images by Caitlin Dieck.

Infrared absorption spectroscopy in the mid-IR range (6000–400 cm–1) showed no major nitrogen-related absorption in the one-phonon region, which classified both samples as type IIa. No hydrogen-related defects were detected, either. UV-Vis-NIR absorption spectra collected at liquid-nitrogen temperature revealed a smooth increase in absorption from the infrared region to the high-energy end of the spectrum, with a 737 nm peak in both samples and a small absorption peak at 596 nm in the 3.23 ct synthetic. The 737 nm peak is an unresolved doublet at 736.6/736.9 nm attributed to [SiV]–. This center is often inadvertently introduced during CVD growth (P. Martineau et al., “Identification of synthetic diamond grown using chemical vapor deposition (CVD),” Spring 2004 G&G, pp. 2–25; W. Wang et al., “CVD synthetic diamonds from Gemesis Corp.,” Summer 2012 G&G, pp. 80–97) but is rarely observed in natural diamonds, especially using absorption methods. The 596 nm feature is particularly useful for identification purposes, as it has only been reported in CVD synthetic material (Martineau et al., 2004).

Photoluminescence (PL) spectra acquired with 514 nm laser excitation at liquid-nitrogen temperature revealed a doublet at 596/597 nm, nitrogen-vacancy centers at 575 [NV]0 and 637 [NV]– nm, and [SiV]– at 736.6/736.9 nm for both samples, with the [NV]0/– luminescence dominating. The strength of the [NV]0/– centers was consistent with the red-pink fluorescence colors (figure 4). Although the 596/597 nm doublet is not thought to arise from the same center as the 596 nm feature seen in the absorption spectrum of the 3.23 ct sample, it has only been detected in CVD synthetics, thus revealing the samples’ CVD origin (Martineau et al., 2004). The doublet also indicated that the samples had not undergone post-growth HPHT (high-pressure, high-temperature) processing to improve their color, as the treatment would have removed this feature. 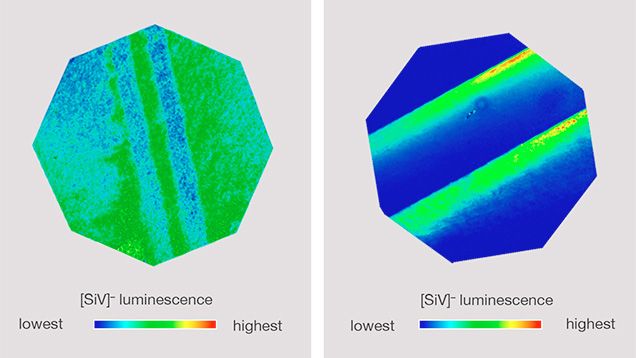 Analysis of these two large samples demonstrates that high-quality CVD synthetic diamonds can be produced even without post-growth decolorizing HPHT treatment, marking a significant improvement in CVD growth. Using advanced spectroscopic and fluorescence imaging technologies, it is nevertheless possible to detect low concentrations of impurity centers, allowing conclusive determination of these samples’ synthetic origin. GIA is monitoring the development of laboratory-grown diamonds and conducting research to ensure that we can continue identifying every single synthetic diamond.

Caitlin Dieck and Lorne Loudin are research laboratory technicians, and Ulrika D’Haenens-Johansson is a research scientist, at GIA in New York.

Pink CVD lab-grown products can be separated from natural and treated-color natural pink diamonds by a combination of gemological and spectroscopic properties, which are explored in this study.

High-quality CVD-grown diamonds, comparable in color and clarity to natural diamonds, can be identified using a combination of gemological and spectroscopic properties.

Strong absorptions from N-V centers were the main cause of a CVD synthetic diamond’s pinkish orange bodycolor.

Advances in CVD growth technology have resulted in crystals that yield well-proportioned round brilliant cuts.

Report on the analysis of an unusually large CVD synthetic diamond, unique in that its Faint to Light pinkish brown color doesn’t appear to be the result of post-growth treatment.

The gemological and spectroscopic characteristics of these type IIa synthetic diamonds suggested that they experienced different growth and/or treatment histories.