As one of the seven Buddhist treasures, coral is a symbol of importance in Chinese culture. Golden-colored coral is considered “sublime,” since both red and gold represent prosperity and prestige. Golden coral, which is usually treated black coral, can be identified by its appearance and structure, with concentric growth layers and a pitted texture (figure 1, left). Imitations lack these characteristic features, which is of relevance to those deal with coral.

The Lai Tai-An Gem Laboratory in Taipei recently received a bracelet for identification; the client claimed the material was golden coral. The bracelet was composed of several evenly sized bright gold to deep brown beads, strung together with thread, that exhibited a waxy luster and an interesting “swirl” pattern (figure 1, right). Identical spot RIs of 1.55 were obtained from each bead, and there was no reaction under LW or SWUV light. The material did not exhibit the characteristic pitted texture of golden coral. Further analysis by FTIR and Raman spectroscopy identified the beads as plastic (resin). Peaks at 2934, 2862, 1731, 1285, 1128, 1072, 745, and 703 cm–1 in the infrared spectrum (figure 2) and peaks at 619, 649, 1000, 1038, 1448, 1578, 1599, and 1725 cm–1 in the Raman spectrum (figure 3) were indicative of plastic. Further inspection at 60× magnification with high-intensity fiber-optic illumination showed that these translucent beads had the same swirl texture extending to the center from the surface, indicating that they were composed of plastic. The aforementioned natural characteristics were not seen at all in this material. 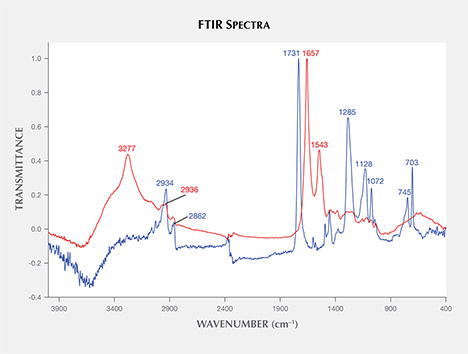 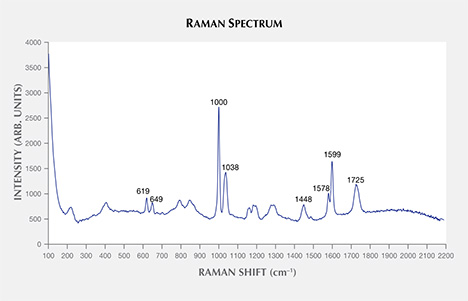 Golden coral may possess a degree of instability, so some material is coated with resin to strengthen the structure. In this case, however, each bead was entirely formed of plastic made to imitate golden coral. Plastics, along with glass, are among the most adaptable materials and can be fabricated to imitate virtually any natural material imaginable. Some imitations are more difficult to identify than others, but in this example identification was fairly simple owing to the structural differences of the two materials, observed with either a microscope or a loupe.