Two brownish purple faceted specimens (figure 1) were submitted for identification at the Gem Testing Laboratory, Jaipur, India. The 2.95 ct mixed cushion measured 9.95 × 8.05 × 5.88 mm, while the 1.58 ct mixed oval measured 9.07 × 7.08 × 4.46 mm. Both were relatively clean to the unaided eye. Based on their color, they were thought to be spinel, but testing soon proved otherwise. Testing yielded the following gemological properties: optic figure—uniaxial; RI—1.549–1.559; birefringence—0.010; and hydrostatic SG—2.63. The material fluoresced a weak orangy red under short-wave UV and was inert under long-wave UV. An absorption band was observed in the yellow-green region using a desk-model spectroscope. In addition, both samples displayed strong dichroism (figure 2) with deep saturated and pale purple colors along the “o” and “e” rays, respectively; this also influenced their face-up color. Under magnification, growth zones and two-directional cleavage planes intersecting at almost 90° were visible. The cleavage planes also contained some fine dendritic films; additionally, the oval specimen had an unidentified brown crystal.

Figure 2. The scapolite specimens displayed intense dichroism (shown here in the cushion), with a deep saturated purple along the o-ray (left) and pale purple along the e-ray (right). Photos by Gagan Choudhary.

These gemological properties were consistent with scapolite. Raman spectroscopy confirmed this, showing the characteristic peaks for scapolite at approximately 260, 296, 359, 418, 455, 534, 771, 993, and 1093 cm–1. The Raman spectra suggested the specimens belonged to the marialite end of the meionite-marialite solid solution series of the scapolite group (see rruff.info); this was supported by their RI and SG values (R. Webster, Gems: Their Sources, Descriptions and Identification, 5th ed., rev. by P.G. Read, Butterworth-Heinemann, Oxford, UK). Polarized absorption spectra (figure 3) revealed a broad absorption centered at approximately 550 nm in both specimens. The intensity of this absorption was stronger in the o-ray direction, while a weak hump at about 630 nm was also present in the e-ray direction. Such absorption bands, associated with Fe3+ ions and producing purple coloration, have been reported in sugilite (Spring 1995 GNI, pp. 66–67); however, additional Fe3+ features at approximately 350–365 and 410–420 nm were absent in both the “e” and “o” rays of those specimens. Qualitative EDXRF analysis revealed the presence of Al, Si, K, Ca, Fe, Br, and Sr. Mn is a common impurity resulting in purple coloration of stones such as kunzite or some sugilites, but it was not detected in these specimens. On the basis of absorption spectra and elemental analysis, the purple color of these scapolites appears to be caused exclusively by an Fe impurity. 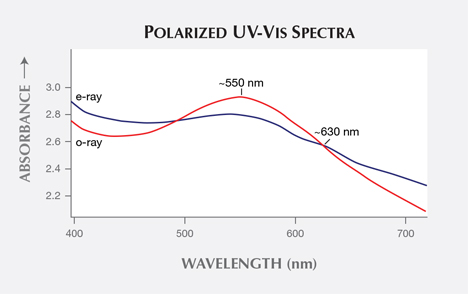 Figure 3. Polarized UV-Vis spectra of the cushion-cut scapolite (shown here in the cushion) displayed Fe-related absorption at approximately 550 nm, which is responsible for the purple color of these specimens.

Purple scapolite is known from many localities such as Myanmar, Tanzania, and Tajikistan, but the client did not know the source of these stones. Although we have seen many purple to violet scapolites in the past, these specimens were different because of their brown color component, reminiscent of spinel.

Gagan Choudhary (gagan@gjepcindia.com) is the deputy director at the Gem Testing Laboratory in Jaipur, India and a regular Gems & Gemology contributor.

The effect of irradiation on scapolite with tenebrescence, a color-change phenomenon that occurs after exposure to UV light.

This contributor encountered parcels of rough and faceted scapolite that appeared strongly zoned to the unaided eye.