Mogok, Myanmar is considered the source of the finest rubies on Earth. In 2000, an exciting new ruby discovery was made in Namya, located in the Kachin state approximately 300 km north of Mogok and east of the jade mine at Hpakant (figure 1). While known mostly for its vibrant pink and red spinels, Namya also produces fine rubies, typically of medium saturation. Due to the remarkably similar geology of the two deposits, it is often impossible to separate Mogok rubies from Namya material. 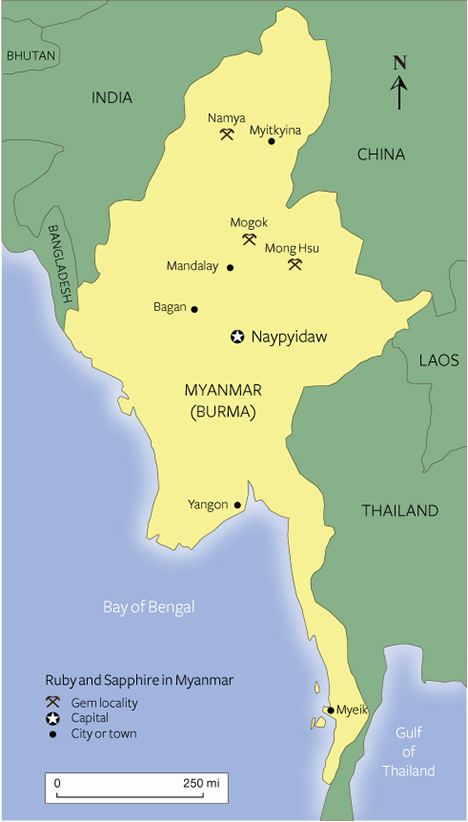 Figure 1. The Namya mining area is about 300 km north of Mogok. Namya, Mogok, and Mong Hsu together form a “ruby triangle” in northern Myanmar, as these three locations have produced high-quality ruby. Adapted from R. Hughes, Ruby & Sapphire: A Collector’s Guide, 2014, Gem and Jewelry Institute of Thailand, Bangkok, p. 132.

In the spring of 2014, a rough stone with strong red color and unusually fine clarity weighing approximately 1.2 grams was discovered in Namya. The stone was entrusted to a skilled and experienced ruby cutter, who finished it as a 3.32 ct roundish cushion measuring 7.99 mm in diameter. The color, clarity, and cutting are so unusual for a ruby that on initial casual observation, most experts have mistaken it for a spinel.

In December 2014, Richard Hughes of Lotus Gemology examined the stone, commenting on its “pigeon’s blood” color. Additionally, he remarked that its clarity was “extraordinary,” mentioning that only “a light dusting of silk is evenly distributed across the stone” and noting that it was “obvious that the lapidary took great care in its fashioning, befitting a gem of such high value….”

This exceptional ruby deserved a befitting name. Several ideas were put forward; calling it a “King” seemed grandiose, and it was too vividly saturated to be a “Princess.” In March 2015, the Crimson Prince ruby found a fitting new home at a prestigious haute joaillerie on Place Vendôme in Paris.

Jeffery Bergman (jeffery@primagem.com) is the director and founder of Primagem in Bangkok.

Status of Ruby and Sapphire Mining in the Mogok Stone Tract

Burma, now named Myanmar, has for centuries been considered the world's preeminent source of fine rubies.

The Rubies of Burma: A Review of the Mogok Stone Tract

A review of the history of this area, its geology, and the mining methods that have predominated.