A color-change sapphire was recently submitted to the GIA lab in Carlsbad for an origin determination report. The 5.68 ct transparent cushion mixed cut displayed a strong color change from grayish violet in fluorescent light to purple-pink in incandescent light (figure 1). Color-change sapphires generally range from blue to violet in daylight-equivalent (fluorescent) light and from purplish pink to pinkish purple in incandescent light. Stones displaying a strong color-change phenomenon are highly desirable. 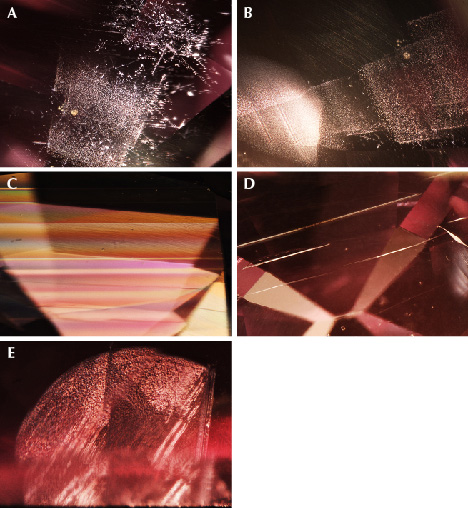 Standard gemological testing proved that this stone was corundum with a refractive index (RI) of 1.760 to 1.768. Its weak ruby spectrum displayed absorption lines in the red area between 660 and 695 nm, a broad absorption in the green-yellow area between 500 and 600 nm, and two fine lines in the blue area between 460 and 480 nm. It fluoresced a strong patchy orange color under long-wave UV and a weaker orange under short-wave UV. Microscopic examination revealed exsolved rutile as reflective platelets, arrowheads, particles, and needles (figure 2A); loose white particle clouds arranged in geometric and stacked patterns (figure 2B); a series of twinning lamellae (figure 2C); boehmite needles or tubules (figure 2D); and reflective fingerprints with iridescence (figure 2E). No evidence of heat treatment was observed. The stone showed diffused pinkish purple zoning in immersion. This inclusion scene is common in but not limited to sapphires from Sri Lanka, Madagascar, and Myanmar (formerly Burma).

To help with the country of origin determination, we collected laser ablation–inductively coupled plasma–mass spectrometry (LA-ICP-MS) chemistry. The results showed very low concentrations of iron, 11–13 ppma, and an unusually high vanadium at 300 ppma.

Several years ago a parcel of color-change sapphires was documented at GIA’s laboratory in Bangkok. That material, which had the same unusual chemistry of low Fe and high V, was from Myanmar. The chemistry profile of our client-submitted stone was consistent with that of the research stones previously documented from Myanmar.

This is the first time the Carlsbad lab has encountered a color-change sapphire with such a unique chemistry profile. LA-ICP-MS again proved to be a useful tool for gemstone origin determination, especially when the inclusion scenes of different localities overlapped.