When exposed to long-wave UV light at 365 nm, the diamond exhibited medium orange fluorescence. Based on photoluminescence (PL) spectroscopy, collected using several lasers, it was identified as a treated diamond that had been subjected to high-pressure, high-temperature (HPHT) annealing, irradiation, and subsequent low-pressure annealing. The PL spectra were dominated by the presence of strong NV centers at 575 and 637 nm, along with a strong GR1 peak, confirming the cause of the diamond’s luminescence as the NV centers.

UV-Vis-NIR absorption spectra were collected at room temperature (figure 2) and at liquid nitrogen temperature inside an integrating sphere for this diamond (along with a 0.48 ct treated pink CVD synthetic that does not show the pronounced color change, for comparison). At liquid nitrogen temperature with the diamond under incandescent illumination, the most prominent feature was the GR1 peak creating the purplish gray coloration, comparable to the blue color generated in many irradiated type IIa diamonds. In daylight-equivalent illumination, the emissions of the NV0 and NV– centers were superimposed on the absorption spectrum, thus influencing the diamond’s color within the yellow to red region of the visible spectrum. Color grading of diamonds includes the effect of fluorescence, and therefore the reported color was Fancy brown-pink. 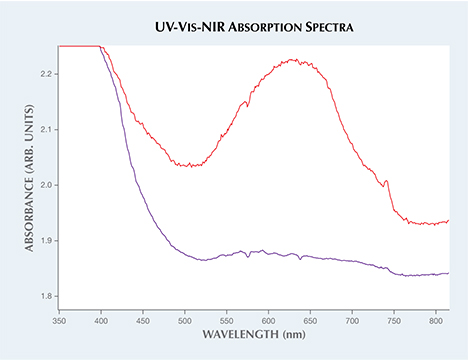 Figure 2. Room-temperature UV-Vis-NIR absorption spectra were collected on the 4.29 ct treated sample (red trace) and a 0.48 ct treated CVD synthetic (blue trace) with a color grade of Fancy Vivid purplish pink. While NV-related red luminescence caused a pronounced difference in color for the 4.29 ct sample, it only produced a minor change in the treated CVD synthetic. In incandescent light (and with minimal influence of the red luminescence), the synthetic’s color shifted slightly to Fancy Deep purplish pink. The pronounced absorption from the GR1 peak (550–750 nm) within the 4.29 ct diamond accounts for the purplish gray color in incandescent lighting.

While treated diamonds have pronounced UV fluorescence due to NV centers, fluorescence spectra collected at a variety of wavelengths show that the NV luminescence is actually stronger when excitation is from blue light (450–500 nm) than from ultraviolet wavelengths, as in the case of this stone (figure 3). This strong emission stimulated by visible light indicates the diamond is colored by red luminescence in response to blue light and, to a lesser extent, by fluorescence due to the UV component in daylight. Other treated pink diamonds, colored by NV absorption, showed similar excitation spectra (Y. Luo and C.M. Breeding, “Fluorescence produced by optical defects in diamond,” Summer 2013 G&G, pp. 82–97). This red luminescence due to NV centers is comparable to the more commonly noted green transmission luminescence from the H3 centers seen in some yellow diamonds. Such yellow diamonds receive greenish color grades due to the visible influence of the green emission on the perceived color in daylight conditions. 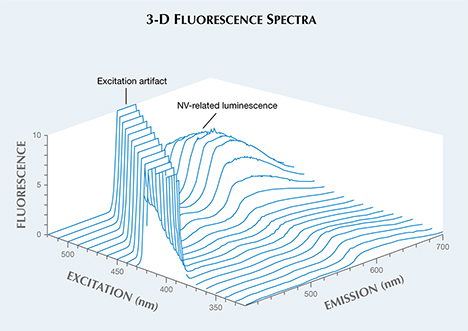 Figure 3. These 3-D fluorescence spectra were collected using excitation from the UV range through the blue range of visible light (320–520 nm). The corresponding fluorescence spectra show that the relative intensity is much higher when excited by wavelengths within the visible region than in the UV region. This indicates that red luminescence excited by visible light is a greater contributor to the pink color than the UV-activated fluorescence. The 0.48 ct treated CVD synthetic shown in figure 2 demonstrated identical behavior—refer to Luo and Breeding (2016) for comparable spectra—and indicates that NV-related luminescence contributes to the graded color in many pink diamonds that are colored by NV centers. The excitation artifact occurs when the emission spectrometer scans across the excitation wavelength.

For most treated pink diamonds, red luminescence corresponds with and enhances the pink bodycolor (Fall 2011 Lab Notes, pp. 228–229), much like chromium-related red fluorescence enhances the color of rubies. Since bodycolor closely corresponds to luminescence color for most treated pink diamonds, the color difference between daylight and incandescent light sources is minimal. For example, the 0.48 ct treated pink CVD synthetic diamond (figure 2, blue trace) was color graded as Fancy Vivid purplish pink using a daylight-equivalent light and as Fancy Deep purplish pink under an incandescent light. The NV-related emission, excited by the UV to blue light, brightened the diamond in that viewing environment.

The purplish gray bodycolor for this 4.29 ct treated diamond seen under incandescent light derived from the strong GR1 absorption induced by irradiation. The GR1 intensity, as measured by 633 nm photoluminescence spectroscopy and normalized using the diamond Raman peak, was compared with 20 other treated pink diamonds that did not show a substantial color shift. The GR1 intensity of this diamond was 8 times greater than the average value of the 20 treated pink diamonds and 3.5 times greater than the highest value. The GR1 intensity of this diamond was comparable to irradiated green to blue diamonds. In incandescent light, the red luminescence appeared to provide a minimal contribution, as the modifying hue was purplish (implying a reddish component) and not bluish as one might reasonably expect for an irradiated diamond.

Other diamonds have shown a shift in color grade due to appreciable fluorescence. Examples include the 56.07 ct Tavernier diamond, which displays a brown to pink color shift (Y. Liu et al., “The alexandrite effect of the Tavernier diamond caused by fluorescence,” Color Research and Application, Vol. 23, No. 5, 1998, pp. 323–327), and a few type Ib diamonds with a NV-related color shift from greenish brown to orangy brown (Fall 2011 GNI, pp. 234–235).

Some CVD-grown diamonds also have shown a pink to blue color shift, but due to an entirely different mechanism. In those synthetic diamonds, the color change was caused not by a difference in light sources, but by a temporary charge-transfer effect activated by UV exposure. For those CVD synthetics with a high concentration of silicon impurities, UV exposure precipitated a charge transfer between negative and neutral silicon-vacancy centers. In one CVD specimen, the relative concentrations of SiV– and SiV0 were essentially reversed with UV exposure and thus influenced the color change from its stable color of Fancy brown-pink to a temporary Fancy Intense blue (U. D’Haenens-Johansson et al., “CVD synthetic gem diamonds with high silicon-vacancy concentrations,” Conference on New Diamond and Nano Carbons, May 2015, Shizuoka, Japan).

The 4.29 ct natural diamond noted here was HPHT annealed and irradiated to create the NV centers. It appeared to have been irradiated to a far greater extent than most treated pink diamonds, and as a result it had a significantly higher GR1 intensity (as shown in figure 2 and confirmed with 633 nm PL). This accounts for its purplish gray color in incandescent light. The color change between these two attractive colors, along with its large size, makes this diamond quite unusual and serves to illustrate that the color of treated pink diamonds is assisted by red luminescence. This stone also demonstrates that while multiple treatments can provide for some identification challenges, they can also create some truly intriguing products.

Sally Eaton-Magaña is a research scientist at GIA in Carlsbad, California

How variations in UV lamp output can affect observed fluorescence color and intensity.