Green and yellow colors of spodumene, in addition to the widely known violet-pink variety kunzite, are now familiar to the trade and often submitted to gem labs. Recently, this contributor examined a greenish blue stone (figure 1) that unexpectedly turned out to be spodumene.

The 40.50 ct oval mixed-cut specimen measured 24.50 × 10.60 × 10.42 mm. It appeared quite dull, with areas of extinction caused by gray overtones and improper fashioning. The face-up color was heavily influenced by the two pleochroic colors, green and blue. The specimen’s overall appearance was similar to tourmaline, though gemological examination ruled out that possibility. The following gemological properties were recorded: optic figure—biaxial; RI—1.660–1.675; birefringence—0.015; hydrostatic SG—3.19; fluorescence—inert; and weak absorption bands in the blue, green, and yellow-orange regions at around 440, 545, and 600–650 nm in the desk-model spectroscope. The RI and SG values are consistent with those reported for spodumene in the gemological literature. Magnification revealed a few long, conical growth tubes below the table facet and cleavage planes along the girdle edge—inclusions typical for spodumene. The most striking feature of the specimen was its strong pleochroism (figure 2), which displayed three colors: green, blue, and violet. Infrared and Raman spectroscopy further confirmed the sample as spodumene. EDXRF analysis revealed the presence of Al, Si, Fe, and Mn, with a higher amount of Fe than Mn. Polarized UV-visible-NIR spectroscopy in the 200–800 nm region (figure 3) revealed a difference in absorption patterns. The violet and green directions displayed small peaks at ~430 and 437 nm, and absorption bands in the region 500–700 nm. The violet direction showed broad features at ~545 and 630 nm, the green direction at ~545, 605, and 655 nm. The feature at ~437 nm has been assigned to Fe3+ (R. Lu, “Color origin of lavender jadeite: An alternative approach,” Winter 2012 G&G, pp. 273–278). The feature at ~430 nm has been assigned to Mn2+ and those in the 500–700 nm region to various states of Mn (Mn3+/Mn4+) and its sites in the structure (see I. Petrov, “Role of natural radiation in tourmaline coloration: Discussion,” American Mineralogist, Vol. 75, 1990, pp. 237–239). The peak at ~630 nm indicates a defect usually produced by irradiation (E.W. Claffy, “Composition, tenebrescence and luminescence of spodumene minerals,” www.minsocam.org/ammin/AM38/AM38_919.pdf). These samples were irradiated via X-ray. 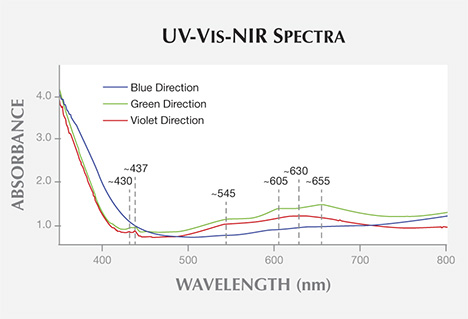 Figure 3. Polarized UV-Vis-NIR spectra of the greenish blue spodumene display bands related to Fe3+, Mn2+, Mn3+, and Mn4+. The band at ~630 nm is related to an irradiation-produced defect.

It is widely known that green spodumene without chromium as the chromophore often results from irradiation, but this contributor had never observed a greenish blue color in spodumene. Irradiated green spodumene typically displays a strong blue pleochroic color along the c-axis. In this case, the c-axis was not determined, but one direction displayed a strong blue color, which was further supported by the peak at ~630 nm.

Gagan Choudhary is deputy director of the Gem Testing Laboratory in Jaipur, India.