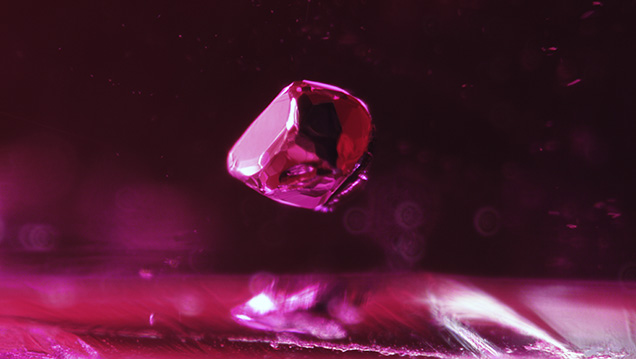 Opaque, black-reddish crystals, presumably chalcopyrite, are commonly seen in rough rubies from Montepuez. They are rarer in finished stones because of their high contrast with the host material. Field of view 1.00 mm. Fiber-optic illumination. Photo by C. Khowpong

Within a decade, Mozambique has become the world’s most productive source for gem-quality ruby. Since the discovery in 2009, GIA has followed these deposits from the front lines, collecting data in the field and in the laboratory. Wim Vertriest will review all facets of Mozambican ruby, including the development of the mining area, market response, gemological characteristics and common treatment procedures.

Since joining GIA in 2015, Wim Vertriest has participated in GIA Field Expeditions to numerous sapphire, ruby and other gem mining areas in Thailand, Cambodia, Vietnam, Myanmar, Sri Lanka, Russia, Greenland, Tanzania, Mozambique and Ethiopia. During these expeditions, he was responsible for sample collection and documenting the local gemstone dynamics. In his role as supervisor of field gemology at the lab in Bangkok, he oversees the field gemology department and curates GIA’s colored stone research collection. Vertriest holds an MSc in Geology from Catholic University of Leuven (KU Leuven), Belgium, with specialization in ‘Geodynamics & Geofluids’. He has also earned his Graduate Gemologist® diploma from GIA and the FGA diploma from the Gemmological Association of Great Britain (Gem-A).