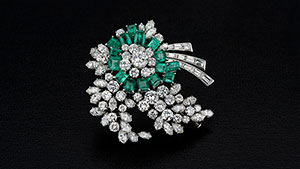 For most of the 20th century, the principal source of fine spessartine was the area around the Little Three mine near the town of Ramona in southern California.