Geology and Development of the Lomonosov Deposit, North-Western Russia

Reviews diamond discoveries at the Lomonosov deposit, as well as the geology of the Arkhangelsk kimberlite province.

Opals with an unusual purple bodycolour and strong play-of-colour have recently appeared in the market. 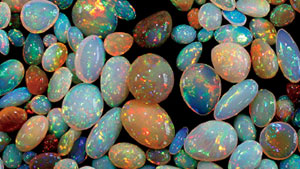 A new opal deposit was discovered in 2008 near the village of Wegel Tena, in the volcanic rocks of Ethiopia’s Wollo Province.

An important deposit of andradite, containing demantoid and topazolite varieties, has been mined near the village of Antetezambato in northern Madagascar since early 2009.

G. Robert (Bob) Crowningshield has made many significant contributions to the study of gems and the science of gemmology.

During a career that spanned more than 65 years, the eminent Swiss gemmologist Dr. Edward J. Gübelin (1913–2005) built a monumental legacy.