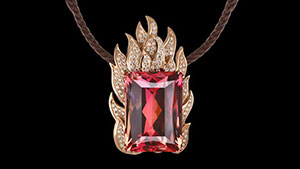 Most authorities agree that the name topaz comes from Topazios, the old Greek name for a small island in the Red Sea, now called Zabargad. (The island never produced topaz, but it was once a source of peridot, which was confused with topaz before the development of modern mineralogy.)

Examination of samples of faceted "Ocean green" topaz reveals that this material has been irradiated in a nuclear reactor.