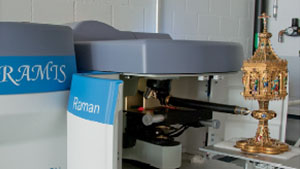 A study of the gems in ciborium from Einsiedeln Abbey

The gemstones that adorn a late-16th-century ciborium from Einsiedeln Abbey in Einsiedeln, Switzerland.

One of the most interesting of the commercially available Czochralski pulled synthetic corundums is pink “Ti-sapphire.”