These red, pink and orange hued gems evoke passion and excitement – and are surefire accessories for sultry summer days. 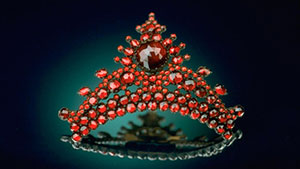 Thousands of years ago, red garnet necklaces adorned the necks of Egypt’s pharaohs, and were entombed with their mummified corpses as prized possessions for the afterlife.