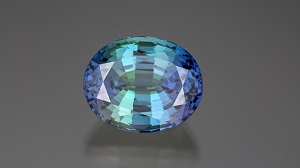 Article
The Glory of Green Gems

Green gemstones, which can uplift and heal our spirits, have been popular gem choices ever since we began to adorn ourselves with jewellery.

Demantoid, green andradite garnet, was discovered in the Central Ural Mountains of Russia in the mid-19th century.

Exposure of some colourless to pale-hued African grossulars to either 60Co or 137Cs gamma rays turns them light yellow-green.