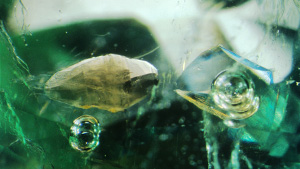 Provides a visual guide to the internal features of natural, synthetic and treated emeralds.