The Story Behind the Story:
China Revealed in 2013 Field Trip

The idea of an exploratory gem and jewellery trip to China was born ‒ as many industry ideas are ‒ from two colleagues walking through a trade show.

Andrew Lucas, GIA manager of Field Gemmology, and Dr Tao Hsu, GIA technical editor of Gems & Gemology, attended the 2013 Tucson gem shows to gather up-to-date information on the coloured stone industry for use as content for GIA’s Education courses. Hsu was relatively new to GIA at the time and Lucas learnt that she was born and raised in Beijing, China and graduated from the China University of Geosciences with a degree in gemmology. She was soon sharing information about the Chinese gem and jewellery industry with him.

It wasn’t long before they realised that her connections and Mandarin language abilities would give GIA an excellent opportunity to document the Chinese industry. Several months later, a team that included Hsu, Lucas, GIA video producer Pedro Padua and GIA photographer Eric Welch, set off on a three-week journey to large and small gem and jewellery companies in China.

They were determined to learn as much about the Chinese industry as they could: What are they manufacturing? Who are they selling to? What’s in the domestic market? What are the trading and retail channels? They visited diamond cutting, coloured stone (cutting and trading) and jade jewellery manufacturing facilities, as well as different forms of wholesaling and the retail aspects of the industry. 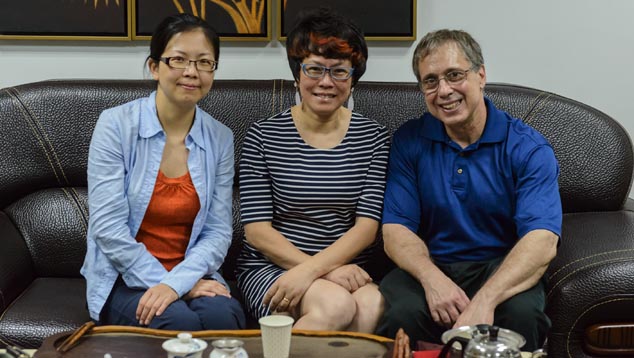 World-famous jewellery designer Shirley Zhang gave a personally guided tour of her factory and discussed her designs and the Chinese market with us. Photo by Eric Welch, © GIA

Lucas said he was amazed by many things he saw and learned in China, but the growth, scale and talent in the industry – and most importantly, the hospitality of the people they visited – made the greatest impression.

“I have been around the world, received great hospitality, and made many close friendships, but nowhere more so than China,” Lucas said. “Everyone was incredibly open and candid about their work. I found myself constantly saying ‘I love this country’.”

The Journey of Discovery

The modern jewellery industry in China only began approximately 30 years ago, Hsu said, but the country has a long history in jewellery.

“We started to use gold to decorate people and clothing 3,000 years ago and you can trace the use of jade back even further,” she said. “Before 1912, there were rock shops and studios on a small scale that only served the royal family, not really the ordinary people. It was a totally different model. After the 1930s, China experienced a long period of upheaval of about 50 years, which included the Second World War and the Cultural Revolution. There was no development of the jewellery industry during these 50 years.”

“That all changed in 1978 after the country re-opened. Then we started to learn from the Western world about how to run a jewellery business,” she said. “This is a new era for the Chinese industry.”

The Chinese gem and jewellery industry is supported by a large pool of people with bachelor's, master's and doctorate degrees in gemmology, which is offered as a major course of study at many universities, Hsu said. And the opportunities for these graduates grow every year.

“When I graduated 10 years ago, very few of us had the ambition to open a jewellery business,” she said. “But now many have that dream and take action to make it a reality right away because they see that the economy and the market are growing so fast and a lot of opportunities are achievable.”

“It’s not that hard for you to start something for yourself. The broad view and the personal vision work together,” Hsu said. 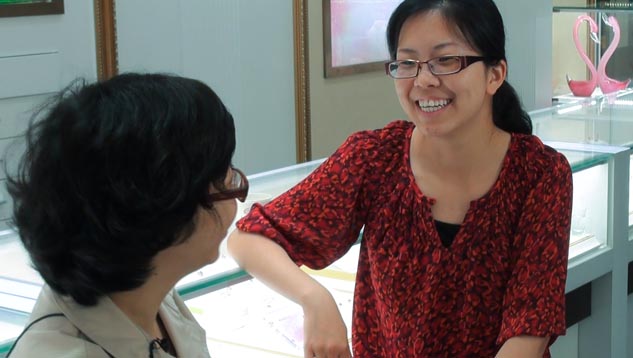 This network of gemmology alumni was one of the most important ingredients in the GIA team's travel to the country to learn about the industry, Lucas said.

“Tao brilliantly planned and executed this ambitious trip through her former classmates and industry contacts,” Lucas said. “They all wanted to help with everything – logistics, anything we needed. This was especially true when we went to do interviews – they would say ‘you must go see this person’ or ‘I can help you with this’. It’s almost part of their hospitality.”

The team travelled to the Shenzen, Panyu and Pingzhou districts of Guangdong province (which is believed by many to be the jewellery manufacturing centre of the world), to Shanghai (to better understand the commerce aspect of the industry) and Beijing (to document retailers and the highest-end of manufacturing).

“From Shenzhen to Guangzhou, we witnessed massive manufacturing and trading in coloured stones, jade, jewellery and diamonds,” Lucas said. “The sheer scale of the industry was overwhelming. All around us were factories, trading centres and organisations promoting trade and government agencies to facilitate trade and retailers.” 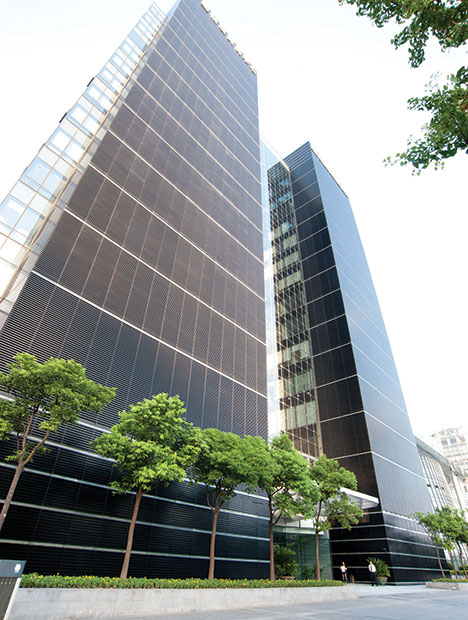 “All of this growth has happened in the past 30 years,” Hsu said.

That growth power was clearest in Shanghai, Lucas said.

“Everywhere in the city spoke economic superpower to us,” he said. “This was also true of the China Diamond Exchange where Mr Li Mu, vice chairman of the Diamond Administration of China, explained in detail the history and workings of the diamond industry in China.”

He also arranged for the team to visit one of the leading diamond jewellery retailers and Internet business operators, Zbird, where Lucas said he learned a lot about the bridal market.

“I didn’t realise China consumes 68% of all of the platinum in the world because it symbolises how they feel about the purity in relationships,” Lucas said. “Platinum fits closely with the personality of the Chinese consumer, so it has caught on very quickly and is a tremendous seller.” 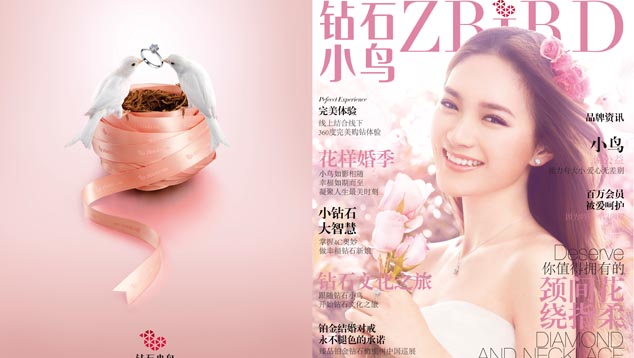 The brother and sister team of Zbird introduced the team to the bridal and Internet diamond jewellery market in China. Image courtesy of Zbird

The team was able to meet with business owners, designers and manufacturers throughout their journey who were very open to sharing information about their companies, their products and their lives.

“Once they realised you have respect for their society and culture,” he said, “it was very easy to make very close friendships very quickly.”

Another strong trait Lucas noticed in the people he met, especially those in their mid-20s, was a strong desire to gain education and knowledge.

“They had such a tremendous amount of focus and ambition, not just ambition to do well in business, but to do extremely well in whatever they do,” he said. “I saw that in the factories, too. The focus was amazing: they have a vision of where they want to be and they work hard at it and they have the patience for it. I found a tremendous amount of confidence in people for their future in China.” 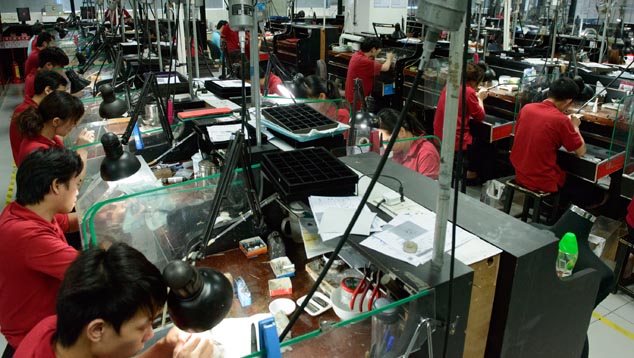 An example of the vast jewellery manufacturing capability in China. Photo by Eric Welch, © GIA

A Clear Sense of Innovation

Lucas said that, for years, China had had the bad rap of being “the knock-off country”, but he saw a lot of innovation and attention to quality and detail in the manufacturing facilities they visited.

“They would adapt some tried and true models of manufacturing that had been done in the West, but they would also implement different modifications and improvements so that they could become more efficient,” he said. “A lot of the industry has moved away from massive amounts of workers ‒ though there’s still a lot of employment ‒ to more state-of-the-art technology in manufacturing.”

That sense of innovation was obvious with the designers they met, too.

“They are not just copying the West, which I think is the perception here,” Lucas said. “One jadeite designer I spoke to takes her inspiration from nature, from her culture and what she learns outside, and puts her own design element to it, blending them all.”

“I saw a lot of innovation in their designs and styles, including elements of individuality and originality in their artistic vision and techniques,” he said. 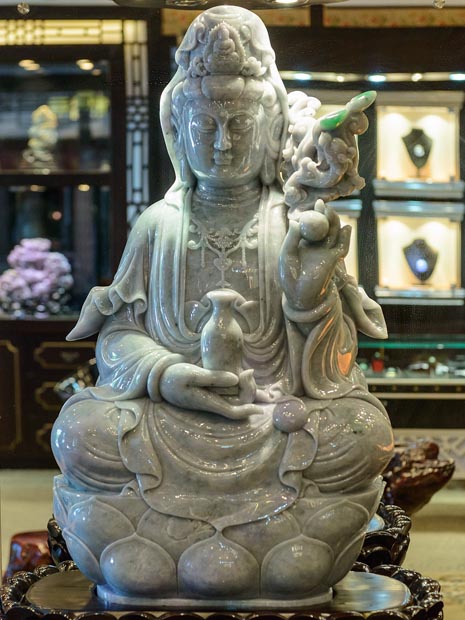 The artistic talent and workmanship of the jadeite carvers in Pingzhou made a strong impression on the entire team. Photo by Eric Welch, © GIA, courtesy of Mazu

One of the most unforgettable experiences for the team was the two days they spent documenting the jade industry in Pingzhou and Sihui in Guangdong Province.

“The jade industry was extremely fascinating ‒ it’s just not something Westerners have a glimpse of very often,” said Lucas, who was surprised by the emotional and cultural connection people have to jade.

Hsu said there are two major materials of jade: Nephrite, whose use goes back thousands of years, and jadeite, which was first imported in about 1870. She said people first used jade to make tools because it was easy to shape, but then started to use it as worship vessels in ceremonies as it was prettier than other stones.

“They used it to worship their ancestors in various ceremonies. Then it gradually became a decoration and people carved it to give it more meaning,” she said. The patterns gradually evolved; traditional patterns or shapes have different meanings, such as peace or good luck.

“We play with it – it’s not like a piece of jewellery that you wear when you go out – we have it in our hand, we play with it every day,” she said. “People think that they are a part of the jade piece and it is a part of them. It’s totally mingled.”

Chinese people enjoy the texture and colour of jade, Hsu said, but can like it for any reason, like the feeling you get when you touch it. “We worship how nature can make it look that way,” she said.

Hsu said that jade is also a reflection of the Chinese people.

“When you look at the nephrite, you want yourself to be like that,” she said.

The team not only got an insider’s look at the creators of Chinese jewellery, but also gained a clearer understanding of the Chinese consumer.

“The really fascinating part of our trip was seeing the explosion and growth in domestic consumption,” Lucas said. “The Chinese consumer is interested in everything.”

That’s because they have had the opportunity to travel the world to see all of the different types of gemstones and materials others are wearing, Hsu said. “So people brought them back and more people got to know these materials.”

“Just in the past 5-10 years, people have started to realise how beautiful coloured stones are,” she said. “Once they saw that, the market started to explode.”

Lucas sees tremendous opportunity for these sales to keep growing as the number of people born in China in the 1980s is three times the size of the Baby Boomer market in the US.

“That’s why it was so important for us to go on this exploratory trip,” he said. “Not only are the Chinese a gracious and hospitable people, but they have the power to help the gem and jewellery industry continue to thrive.”