According to Hindu mythology, moonstone is made of solidified moonbeams. Many other cultures also associate this gem with moonlight, and it’s easy to see why. Its internal structure scatters the light that strikes it, creating a phenomenon known as adularescence. The visual effect is reminiscent of the full moon shining through a veil of thin, high clouds. 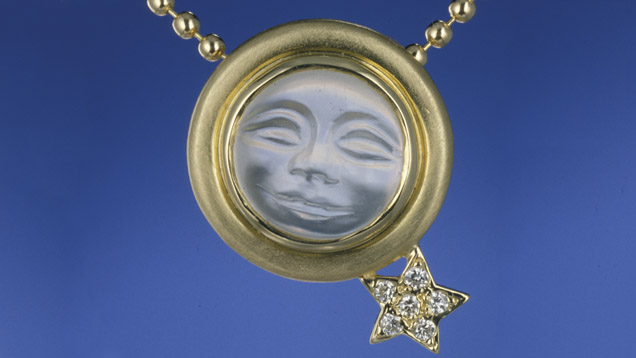 Moonstone has long been associated with the moon. - © GIA & Tino Hammid, courtesy 23rd St. Shop, Santa Monica
Legends say that moonstone brings good luck. Many believed that you could see the future if you held a moonstone in your mouth during a full moon.

Adularescent moonstone was once called “adulari”. The name originated with a city in Switzerland, Mt. Adular (now St. Gotthard), that was one of the first sources of fine-quality moonstone.

Great designers of the romantic Art Nouveau era, such as René Lalique and Louis Comfort Tiffany, featured the pale gem in custom jewellery. Moonstone was also a favourite among artisans of the Arts and Crafts era in the last half of the nineteenth century, who used it in handcrafted silver items.

During the 1960s “flower child” movement, moonstone provided its wearers with the desired ethereal look, and designers of the 1990s New Age movement again turned to moonstone’s natural beauty for inspiration.