The Winter 2016 issue of Gems & Gemology boasts a wealth of information blending the old and the new. The lead article profiles the emerging powerhouse of Jaipur, India. The legendary coloured gemstone cutting centre has become a jewellery manufacturing and retail giant to rival other major players in the industry. Other features include the early synthetic emeralds of Richard Nacken, Vietnamese danburite, a field report from Mozambique and a wall chart of emerald inclusions.

JAIPUR, INDIA: THE GLOBAL GEM AND JEWELLERY POWER OF THE PINK CITY 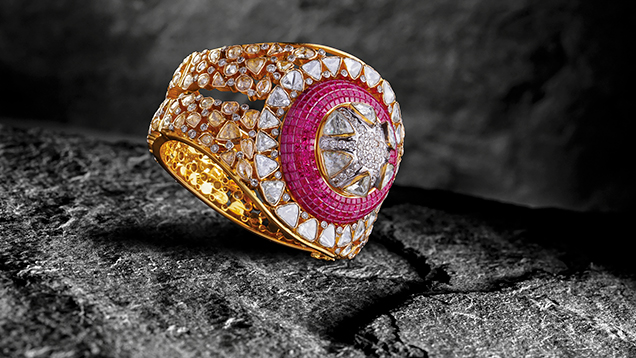 Rubies in a modern invisible setting are combined with polki diamonds in this fusion-style ring. Photo courtesy of Birdhichand Ghanshyamdas Jewellers.

The northern Indian city of Jaipur, long a centre for coloured gemstone cutting, has expanded to include jewellery design, manufacture and retail. A team led by Andrew Lucas and Nirupa Bhatt explores the city’s historical relevance to the gem trade and visits several local manufacturers and retailers to examine the scope and impact of their operations. 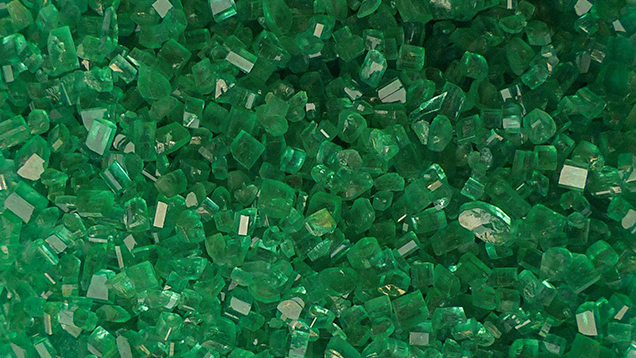 Synthetic emeralds produced by Richard Nacken in the mid-1920s. Nacken left these and other samples to his family, and they are now in the possession of his grandsons. Photo courtesy of E. Schlatter.

Dr Karl Schmetzer and his co-authors recount an important milestone in gemmology: the first gem-quality synthetic emeralds of facetable size. The article reviews the events that led to Nacken’s successful emerald growth, along with the chemical, morphological and microscopic properties of his production. They also address longstanding speculation that Nacken collaborated with IG Farben on synthetic emerald growth.

A NEW FIND OF DANBURITE IN THE LUC YEN MINING AREA, VIETNAM 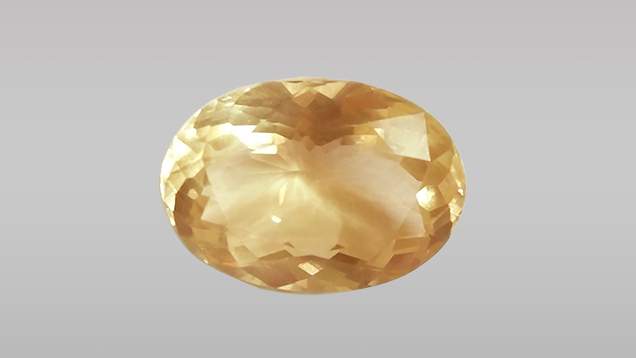 Five rough danburite crystals, in sizes up to 2.5 cm, were found at the Bai Cat deposit in Luc Yen, Vietnam. One, weighing 26.3 ct in rough form, was cut into the 4.6 ct faceted oval. Photos by Le Thi-Thu Huong.

Danburite has been discovered in the gem-rich region of Luc Yen, Vietnam. The rare material, found in 2015, is honey yellow in colour and shows excellent transparency. A team led by Le Thi-Thu Huong investigates the properties of this new find. 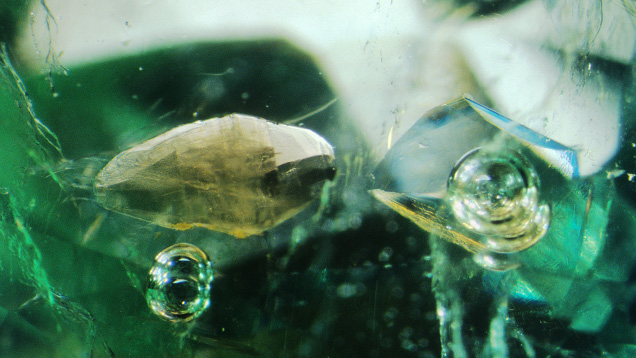 This emerald contains a brown crystal of the rare mineral parisite. There is also an oil-filled cavity showing a blue and orange flash effect, along with two large trapped gas bubbles. This inclusion suite verifies the natural origin of this emerald; it also confirms that the stone, which shows signs of clarity enhancement, is from Colombia. Photomicrograph by John I. Koivula; field of view 3 mm. 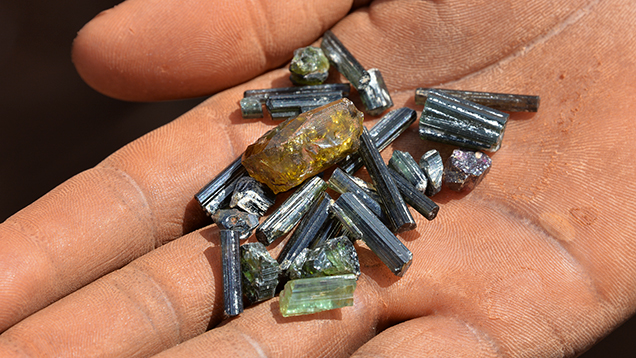 A parcel of mainly green and yellow tourmaline from Ocua, Mozambique. Photo by Vincent Pardieu/GIA.

In 2016, a field gemmology team from GIA Bangkok travelled to northern Mozambique to visit the world’s largest ruby source and to observe developments at various new deposits. The resulting field report by Wim Vertriest and Vincent Pardieu documents production of ruby, spinel and tourmaline in the region, as well as plans for future operations.

G&G’s photomicrography section features entries on chalcedony with quartz windows showing Brazil-law twinning, a demantoid from Namibia with sphalerite inclusions, and a feldspar with an apatite cluster just below the surface. 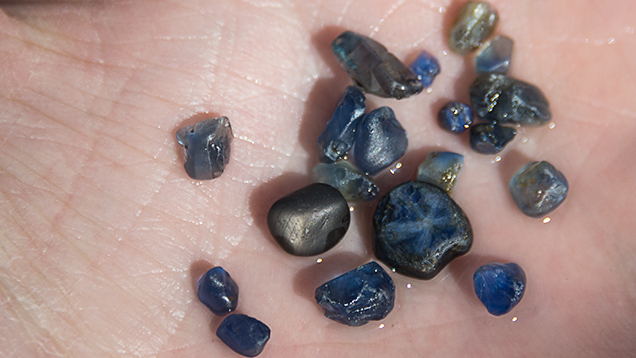 Sapphire production from one day of mining in Tasmania. The trapiche-type sapphire in the centre weighs 2.73 ct. Photo by Vincent Pardieu/GIA.

The Winter GNI section includes a crystal of blue dravite-uvite tourmaline from Afghanistan’s Koksha Valley, a look at “trapiche-type” sapphire from Tasmania, and an investigation of “decorated” jadeite jade.

Readers are invited to vote for the Most Valuable Article from 2016. Click here to vote for the top three articles from our contributors; voting will remain open until Monday, 7 March 2017. All ballots will be entered into a draw to win a one-year subscription to G&G.

Jaipur, India: The Global Gem and Jewellery Power of the Pink City (in English)

Examines Jaipur’s role as a colored stone cutting and jewelry manufacturing center, with profiles of 17 companies and their factory, trading, and retail operations.

Describes the chemical, morphological, and microscopic properties of the first gem-quality synthetic emeralds ever produced, offering a historical perspective on their development.

A New Find of Danburite in the Luc Yen Mining Area, Vietnam (in English)

Inclusions in Natural, Synthetic and Treated Emerald (in English)

Provides a visual guide to the internal features of natural, synthetic, and treated emeralds.

Update on Gemstone Mining in Northern Mozambique (in English)