Boisterous Charles and soft-spoken Erna Leutwyler may have seemed like polar opposites, but through their shared love of learning and jewellery they were able to create a beloved jewellery store in Austin, Texas and a marriage that their friends still remember fondly.

As owners of Charles Leutwyler Jewelers (Leutwyler’s) for more than 20 years, these GIA alumni were committed to sharing their knowledge with others – whether it was with first-time jewellery buyers who wandered into their store, employees new to the jewellery business or long-standing customers looking for the newest designs.

“Charles and Erna believed in teaching others,” says John Sofyanos, a close friend of the couple who knew them for 46 years.

Even after their deaths (Charles in 1996 and Erna in 2015), the couple are sharing their passion for jewellery and legacy of learning through the gift of an annual $18,000 (£12,800) GIA scholarship towards the completion of an on campus Graduate Gemologist, Graduate Jeweler or Jewelry Design & Technology programme in the U.S. The first scholarship will be awarded in June 2018 and then each December for the next year’s programme.

Funded by the Leutwyler’s bequest of nearly $500,000 (£355,000) to GIA’s Endowment Fund, The Charles and Erna Leutwyler Memorial Scholarship will make sure that the couple’s love of learning and jewellery extends to future generations of aspiring gem and jewellery professionals.

Charles and Erna were brought up and spent most of their lives in central Texas. They married in 1946 after Charles returned from serving in the U.S. Army Air Corps during the Second World War. They enjoyed working together and had a good marriage, Sofyanos recalls.

Charles was exuberant and wore a Mexican-style embroidered wedding shirt every day, often “smudged with fingerprints from wiping his hands while working at the bench,” Sofyanos says. “He was brusque, but with a heart of gold and was well-respected by everyone.”

Erna, on the other hand, was calm and reserved. “She dressed properly in a tailored suit with a string of pearls,” Sofyanos says. “She was a true Southern lady.”

“They were a special couple,” says Sofyanos, who met Charles in the autumn of 1969 after returning from Vietnam. The two veterans quickly bonded and became good friends.

Erna managed the front of the store, while Charles worked out the back. “On most days you could see their cat sitting in the window, wearing a beautiful diamond necklace,” Sofyanos says.

Kay Adamek, a long-standing client, first met the Leutwylers in early 1967 at their original town centre shop when Charles designed her solitaire engagement ring and wedding band, “both with his personal hand-Florentine finish.”

“It was such a friendly place and Erna always had the jewellery showing at its best – [She] was the sweet, elegant hostess in the jewellery store. Charles was a master craftsman, obviously happiest with his light and magnifying hood on his forehead,” Adamek says. “In the Leutwyler’s little shop, there was so much trust and honesty.”

Adamek returned to Austin a few years later with her young son after her husband passed away and Charles designed a special ring to incorporate the gold from the original wedding bands into one ring. Over the next few years, she visited them often.

“It was only natural that when I became engaged and later married for the second time, I returned to Leutwyler’s,” she says.

Sharing a Love of Diamonds

Charles, a fifth-generation jeweller, first worked in his father’s watch shop after the war, but his real passion was for jewellery. “Charles enjoyed the industry; he had a good reputation and he liked talking to the diamond dealers,” Sofyanos says.

The Leutwylers opened their jewellery store in the late 1960s in central Austin, not far from the state Capitol. After a few years, they decided to move to an area known as “The Drag”, opposite the University of Texas (UT). The Leutwylers said it made sense financially and it would be more fun, according to Clyde Neal, who worked for the couple from 1972 to 1982. The busy area was popular with students and had a lot of foot traffic.

“Charles loved diamonds,” Neal says. “He realised that being near the university would bring a whole new clientele of young university couples looking for diamond engagement rings.”

That’s exactly how Neal met the Leutwylers in 1972 when he walked into their store as a newly engaged student. He says he left three hours later knowing a lot more about diamonds than he expected.

“Charles sat me down at a microscope and let me see the diamonds for myself. He explained the 4Cs and told me he only sold diamonds cut to ideal proportions,” Neal says. “I asked a lot of questions and he answered them all.”

Charles often took on apprentices, so a few weeks later, Neal came to work in the store. “He taught me how to solder, work with gold, size rings and more about diamonds,” he says. “And he encouraged me to enrol at GIA.”

The Leutwylers wanted all their employees to complete GIA courses, and would reimburse the employee once they completed it. “As soon as he realised someone was good enough, and was going to stick around, he wanted them to start GIA classes,” Neal says.

The Leutwylers also took GIA courses throughout their careers. Charles earned his GIA Graduate Diamonds diploma in 1966 and Erna completed numerous GIA courses. They wanted to make sure they stayed up-to-date with new advances so they could continue to pass that knowledge along to their customers. 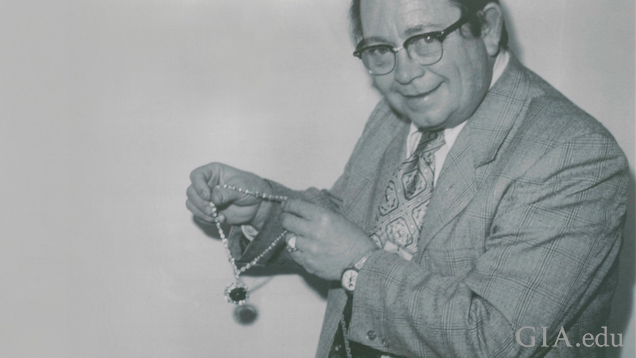 Charles Leutwyler, a fifth-generation jeweller, was invited to examine and photograph the Hope Diamond at the Smithsonian Institution in Washington, D.C. Photo courtesy of the Leutwyler Estate

Charles emphasised the importance of selling a diamond that was cut to maximise brilliance, says Neal. “He only wanted the best, most brilliant diamonds” and documented them by regularly photographing his stock and keeping records on a computer. The Leutwylers used computers before most other small businesses at the time, Sofyanos says.

Charles also taught himself how to photograph the diamonds microscopically – called photomicrography – to see the inclusions, or internal features. According to Neal, his background in gem photography and strong industry relationships led to a remarkable opportunity for Charles to photograph the Hope Diamond

“Charles bought a new suit, and he and Erna made the trip to Washington, DC, going in after-hours with security,” Neal says.

Even in the most formal settings, Charles was not afraid to show his sense of humour. “Charles said he slipped the Hope Diamond into his coat pocket while he set up the equipment,” Neal says. “The security guards were mighty nervous when that happened.”

Charles also enjoyed the mechanical aspect of jewellery making, crafting a work of art and pushing the limits technically. One piece in particular became his “pride and joy,” Sofyanos says.

He designed a Mickey Mouse-character Timex bracelet watch with a “gold nugget” band, a style that was popular in the 1980s. The face was surrounded with 36 diamonds totalling more than 2 carats. The extravagant watch was featured in Texas Monthly magazine’s January 1982 issue for its “over-the-top” design.

“Everyone knew the Mickey Mouse watch,” Sofyanos says. “It was ostentatious and definitely one-of-a-kind.”

The ‘Go-to Guy’ for Education and Advice

Charles was friends with a geology professor at UT, Dr Edward Jonas, who taught a course on coloured gems. Charles wanted to share his knowledge of diamonds, so he invited Dr Jonas and his students to the store one evening for a special diamond session. Neal, who was also enrolled in the class, says many of the students were fascinated by the diamonds and how they’re graded.

“A lot of people in Austin came to Charlie for advice,” Sofyanos says, and the Leutwylers held diamond education nights for the community so potential buyers were well-informed.

Fellow jewellers also came to Charlie for advice. Neal remembers one occasion when another local jeweller called Leutwyler’s and wanted to come in after hours – when no one would see him. The jeweller had been repairing an antique gold pocket watch and burned a hole through the case. It wasn’t easy, but Charles repaired the gold case of the watch.

“He had that reputation,” Neal says. “He was the go-to guy.”

After more than two decades of business, and their entire careers in the jewellery industry, Charles and Erna closed their store in the early 1990s. Over the years they shared their generosity and knowledge with the many employees, customers and friends who knew them.

“Charles and Erna Leutwyler dedicated themselves to sharing their love of gems and jewellery with their community, their employees and everyone they met,” says Anna Martin, senior vice president of global development. “We are honoured that the Charles and Erna Leutwyler Memorial Scholarship will continue that love of learning and spirit of giving. It has the potential to influence countless more future gemmologists.”

Kay Adamek says the Leutwylers became a marker in her life, too.

“When Charles died, I wrote to Erna and received a sweet reply that she did remember me,” Adamek says. “I wondered then how many other young people walked through their doors over all those years and how many other stories there are.”

And now with the scholarship, how many more stories there will be.

Kristin A. Aldridge, a contributing writer, is a graduate of GIA’s Pearls and Accredited Jewelry Professional programmes.

Additional details on scholarship eligibility, how to apply, and
required documents.