Diamonds and coloured stones, carving and mining, historical treasures and the future of the industry are all featured in the latest Gems & Gemology. The Summer 2016 issue leads with the Diavik diamond mine in Canada’s Northwest Territories. Other articles examine Fabergé figures depicting Russian imperial bodyguards, efforts to bring a sustainable and ethical supply chain to the coloured stone industry, the carving of a large opal rough into a museum-quality piece, and the bygone adventures of mine engineer Peter Rainier at the Colombian emerald mecca of Chivor.

MINING DIAMONDS IN THE CANADIAN ARCTIC: THE DIAVIK MINE

The 187.7 ct “Diavik Foxfire”, discovered in spring 2015, is the largest gem-quality rough diamond found to date at the mine. Photo courtesy of Rio Tinto Diamonds.

Canada’s remote Diavik mine is one of the world’s pre-eminent sources of gem diamonds, producing over 100 million carats since 2003. In the lead article, Dr James Shigley and his team review the discovery, development and operation of the mine, which is expected to produce until 2024, when the land will be restored through reclamation and remediation efforts. The article is accompanied by exclusive videos captured at Diavik. 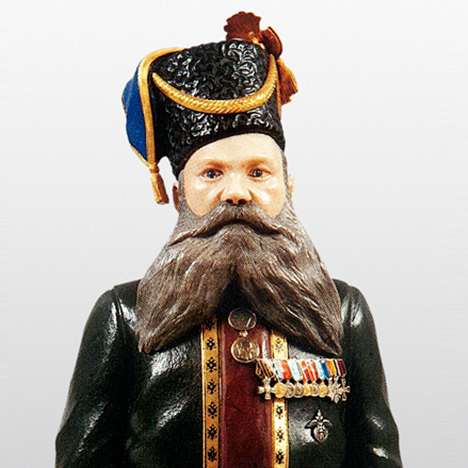 The Fabergé hardstone figure of Chamber Cossacks A. A. Kudinov, who guarded
Empress Maria Feodorovna from 1878 to 1915. Photo courtesy of Pavlovsk State Museum
and Gafifullin (2014).

THE COLOUR OF RESPONSIBILITY: ETHICAL ISSUES AND SOLUTIONS IN COLOURED GEMSTONES

The mining and processing of coloured stones, a multi-billion-dollar industry, still lacks an ethical and sustainable mine-to-market supply chain. Jennifer-Lynn Archuleta reports on the inherent challenges and the ongoing efforts to bring traceability, transparency and sustainability to the world of coloured stones.

THE CHALLENGES OF CUTTING A LARGE GEM OPAL ROUGH 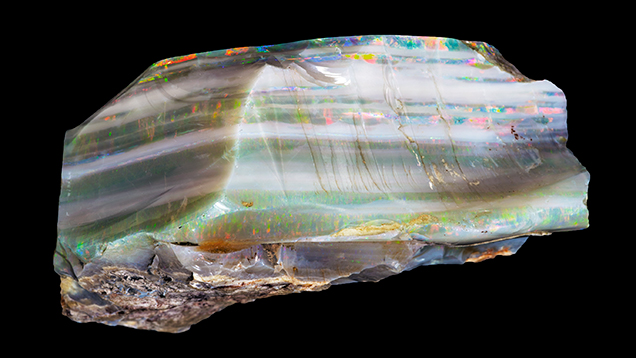 A side view of the Australian opal rough shows all the colour bars and intervening layers of colourless potch. Photo by Robert Weldon/GIA.

Theodore Grussing explains how he planned and cut a 3,019 ct piece of Australian white opal rough into the Molly Stone, a 1,040 ct museum quality piece with play-of-colour across the entire surface. This article describes the many considerations involved in creating this one-of-a-kind gem. A video showing the creation of the Molly Stone enhances the reader’s understanding of the cutting process.

IN RAINIER’S FOOTSTEPS: JOURNEY TO THE CHIVOR EMERALD MINE

Colombia’s Sinaí Valley, the sandstone monolith of El Pulpito hangs from a steep cliff at the top right. The Chivor mine is just out of view above the rock. Photo by Robert Weldon/GIA.

Robert Weldon and co-authors take readers on a trek through Colombian history as they journey to the world-famous Chivor mine, guided by the memoirs of Peter W. Rainier. The field report is accompanied by historical photos from the mine and video of the authors’ journey.

The Lab Notes section reports on a unique drilled emerald, a natural spinel with an unusual yellowish green colour, and the largest blue HPHT synthetic diamonds to date.

G&G’s photomicrography section features a metal sulphide inclusion in a pink pyrope garnet, a topaz hosting a triplite inclusion, and a stunning aurora effect in an iris agate (with accompanying video). 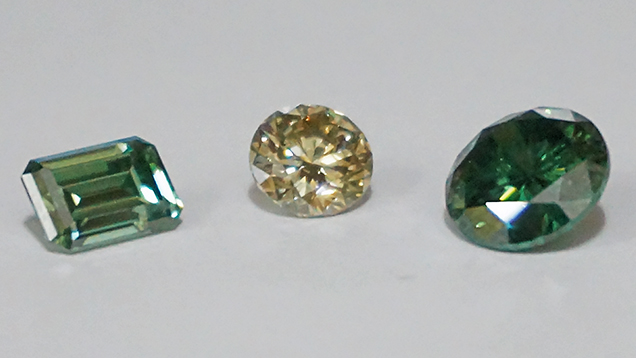 For those interested in testing their knowledge of our 2015 content, the 2016 G&G Challenge will be open until Friday, 12 August. Participants who score 75% or higher will receive a certificate of completion, while respondents who earn a perfect score will be listed in the Autumn 2016 issue of Gems & Gemology.

Mining Diamonds in the Canadian Arctic: The Diavik Mine (in English)

The Color of Responsibility: Ethical Issues and Solutions in Colored Gemstones (in English)

The Challenges of Cutting a Large Gem Opal Rough (in English)

A first-person account of cutting a 3,019 ct piece of white opal to create a 1,040 ct gem with play-of-color across the surface.

In Rainier’s Footsteps: Journey to the Chivor Emerald Mine (in English)

The last day for submissions is
Friday, 5 August 2016.
Take the Challenge