Lomonosov, one of Russia’s newest diamond projects, is located near the historic port of Arkhangelsk on the nation’s European side. GIA senior industry analyst Russell Shor and research scientist Dr Karen Smit provide the first report from this potentially important source of fancy coloured diamonds.

Draw a ring around the world near the 64th parallel in the far north and it will bisect some of the world’s largest diamond mines, from the Canadian operations north of Yellowknife and the massive Siberian deposits, to one of the newest operations, which sits on Russia’s European side, near the historic port of Arkhangelsk.

The Lomonosov diamond deposit, named for the famed 18th-century Russian scientist, came into production four years ago, more than 30 years after its initial discovery. What makes Lomonosov special is that it yields fancy colours – purplish pink, violet, green, yellow and brown − in addition to a high percentage of gem-quality colourless (D-to-Z) diamonds.

Ilya Zezin, deputy chief geologist of Severalmaz, a division of Russia’s largest diamond mining and marketing firm ALROSA, reports that one in every 350 carats of Lomonosov’s 2 million carat yearly diamond production is fancy colour. Compare that against the oft-cited statistic that only one diamond in 10,000 mined around the world can be called fancy coloured. 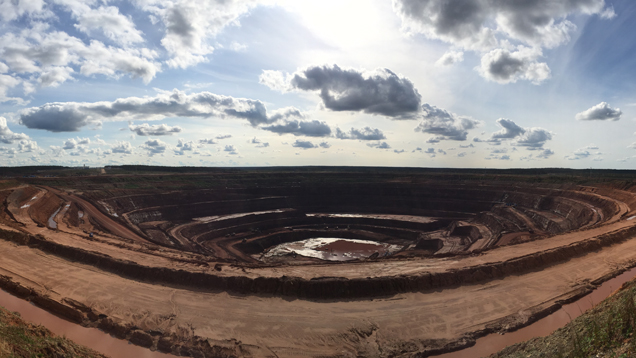 The open pit of the Arkhangelskaya kimberlite. This was the first kimberlite to be developed at the Lomonosov deposit because it had the highest diamond grade and the least overburden. Photo by Karen Smit/GIA

Another unusual feature of the Lomonosov deposit that intrigues geologists is that it contradicts the so-called “Clifford’s Rule”, which states that most diamond exploration programmes focus on Archaean cratons. Cratons are extremely old areas of the Earth’s crust that have remained stable for around 3 billion years. In the Arkhangelsk area, the crust lies in a Proterozoic orogenic belt, which is significantly younger, around 2 billion years old. Diamonds would not normally be expected to be stable in such a terrain. Argyle, one of the world’s largest diamond deposits (mined in north-western Australia by Rio Tinto) is also in apparent violation of Clifford’s Rule and is famous for its continuous production of fancy pink and red diamonds.

Zezin escorted us to the secure sorting facility in Arkhangelsk city where the diamonds are processed before being sent to the sales office in Moscow. Nearly 70,000 carats of diamond, representing around two weeks of production, were on display. An array of the best fancy colours were separated out on a round vanity mirror. These fancy colour diamonds were selected from two months of production; among the approximately 100 carats of yellow diamonds of various intensities were three 1-carat-plus sized purple-pink stones. A similarly coloured, estimated approximately 0.4 carat polished, purple-pink diamond from this deposit sold for more than $1.6 million (£1.0 million) per carat at a Hong Kong tender in 2015. 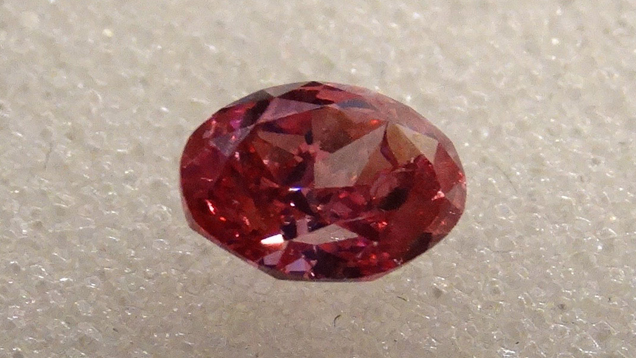 An estimated 0.4 carat purple-pink Lomonosov diamond, mined early in 2015, which sold for more than $1.6 million (£1.0 million) per-carat at the Hong Kong tender sale in September of that year. Photo by Russell Shor/GIA

There will be a lot more diamonds coming, both fancy colours and colourless, Zezin says, because Severalmaz will reach the most productive areas of the two pipes under operation late next year. Additionally, there are four other economic pipes at Lomonosov held in reserve.

The deposit is located about 60 miles (100 km) north by north-east over densely forested terrain from Arkhangelsk. The city, located near where the Dvina River empties into the White Sea, was Russia’s only deep-water seaport in the North for centuries, and is a key trading centre, despite being iced in for nearly five months each year. Travellers reported finding occasional diamonds there as early as the 1740s, but it wasn’t until the late 1970s that Russian geologists began to take a serious look for the possibility of diamonds.

By then, timber had become the lifeblood of the area. Because the White Sea helps moderate the climate, the region is thick with silver birch, larch, pine and spruce − in contrast to the trackless Canadian and Siberian tundra around the other diamond mines at that latitude. 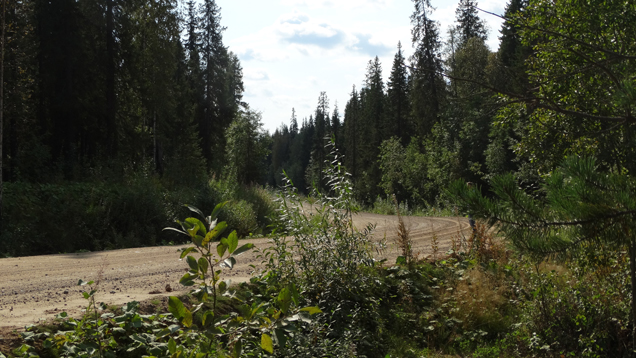 The road to the mine is cut through dense forests of birch, fir, spruce and larch trees. In contrast to the Canadian and other Russian mines at similar latitudes (64 N), the Arkhangelsk regional climate is relatively mild. Photo by Russell Shor/GIA

The region’s economy began to deteriorate just as diamond exploration was ramping up. In 1980 a team of geologists checking airborne surveys of the area found a kimberlite pipe in the middle of a river about 60 miles from Arkhangelsk. While ultimately not economically viable, the discovery spurred wider airborne prospecting and in the early 1980s came the discovery of the cluster that forms the Lomonosov deposit: Pomorskaya (1980), Karpinskogo I and Karpinskogo II pipes (1981), Lomonosovskaya pipe (1982) and the Arkhangelskaya and Pionerskaya pipes (1983). A second cluster about 14 miles to the north-east, called Verkhotina, was discovered in February 1996 by a De Beers-related exploration company. The V. Grib pipe in this kimberlite cluster is being mined and operated by Arkhangelskgeoldobycha Company, a subsidiary of LUKOIL, the Russian oil conglomerate.

The discovery of kimberlite pipes is but the first step in the long, costly development process of any diamond deposit. Each deposit must be extensively sampled by sending hollow tubes a hundred or more metres into the kimberlite, then analysing the results: the size and quality of the diamonds, as well as the potential grade – carats per hundred tons of ore. Nature rarely does things evenly, so core samples must be taken throughout each pipe because the diamond distribution often varies greatly inside them. If the core samples look promising, then bulk samples – a ton or more of kimberlite in each sample − are hauled out and tested to determine whether the grade is economically viable to mine.

These tests usually take several years to complete. Fortunately for Severalmaz, Arkhangelsk city was fairly close and helicopters could transport supplies until a small winter road was built during the exploration period. Severalmaz opened the current forest road in 1986, which made it possible to transport supplies easily without the need for tenuous ice roads as in Canada or the costly logistics of managing the Siberian permafrost. 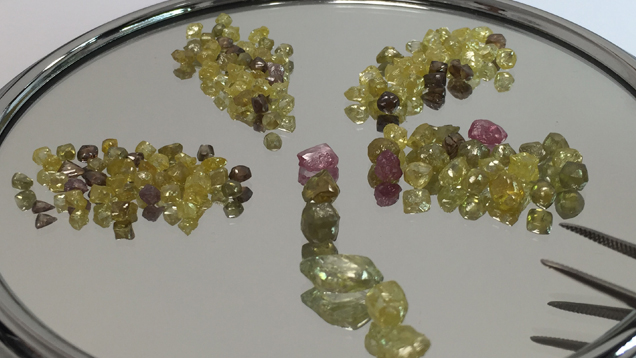 An array of fancy coloured rough diamonds selected from two months of production from the Lomonosov diamond deposit, Arkhangelsk region, Russia. The deposit’s production of fancy colours is around 0.03%, which is higher than the worldwide average of 0.001%. Photo by Karen Smit/GIA

Geology and logistics were favourable for mining the diamonds, but turbulent times intervened. After several years of political upheavals, the Soviet Union dissolved in 1991, sending the government and its finances into disarray. As the new Russian regime emerged from the chaos, the government, along with the newly autonomous Republic of Sakha, where most of the country’s diamond mines are located, created Almazy-Rossii-Sakha (later ALROSA), an organisation  to manage its diamond resources. In turn, it created a subsidiary named Severalmaz to manage the Lomonosov deposit.

But finances remained tenuous, so while the Russian government did help revitalise production in its money-spinning Siberian mines, development of the Lomonosov deposit had to wait – another 12 years to be exact, until 2005. 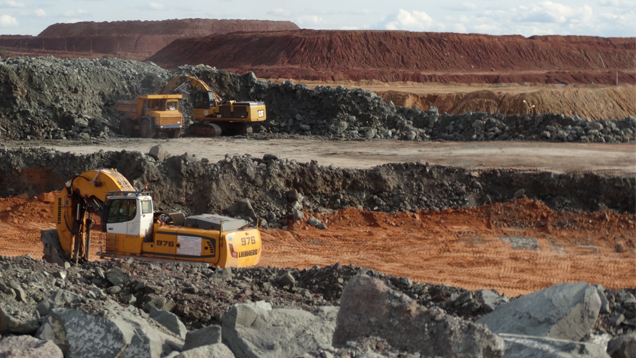 Kimberlite from the Arkhangelskaya and Karpinsky I pipes is stockpiled at separate locations at the mine site and left to weather to ease the recovery process, which in turn, reduces potential damage to large diamonds. Photo by Russell Shor/GIA

“They chose the Arkhangelskaya pipe to begin with, because it had the largest reserves of diamonds and the least amount of overburden (ground cover) – about 30 metres (98 feet), compared to the much larger Lomonosovskaya pipe, which was 54 metres (177 feet) underground,” says Zezin, who notes that, at government insistence, the company tested some unorthodox mining methods for a while, such as shooting water into the ground under very high pressure to raise the kimberlite. They ultimately found these techniques to be “neither efficient, nor effective,” Zezin notes.

Severalmaz is mining the Arkhangelskaya and Karpinskogo I pipes, leaving the largest two, Pionerskaya and Lomonosovskaya, in reserve, while Karpinskogo II and Pomorskaya remain under study. The company reverted to more traditional diamond mining methods, but it does do one thing differently: no blasting.

“The upper part of the ore body is very soft so the excavators can do the work without explosives,” Zezin explains. “As we get deeper, we may have to carry out blasting in a limited section of the pipe where the ore is hardest.”

Another difference from other mining operations is that Severalmaz doesn’t send the material to the processing plant straight away. Instead, the material weathers in a stockpile for several months before it is milled. 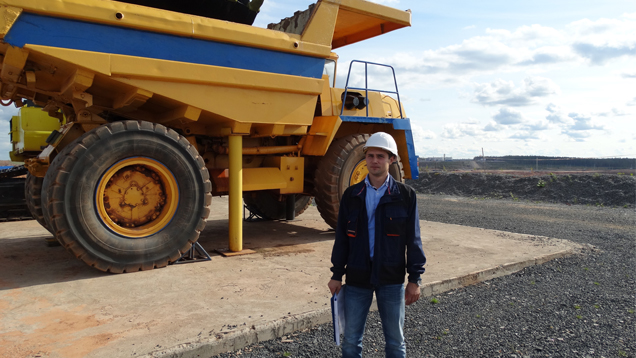 Severalmaz deputy chief geologist Ilya Zezin stands before a 35-ton hauling lorry that was retired from service and is now a monument commemorating the 2014 opening of the main processing facility. Photo by Russell Shor/GIA

In the plant, the ore is mixed in water and tumbled in a giant mill to break it up into pieces measuring about 120 mm × 25 mm, this is large enough to avoid damaging the largest crystals. After milling, the material is dispatched to hydraulic separators. The largest pieces go directly to X-ray units and the medium-sized pieces to density separators, then to the X-ray units that identify and separate diamonds down to one millimetre. The smallest materials never make it to the X-ray units and are sent to the tailings.

The method appears to work well, says Zezin, who points with pride to a monitor that displays the results of continual tests of the tailings for diamonds that might have been missed. The recovery rate averages about 97%, he says. At this moment the monitor was showing recovery rates of over 99%.

The production profile is different for each pipe, and although they are sometimes processed separately, they are mostly processed together. Lomonosov produces few very large diamonds. The largest diamond from Lomonosov weighed 106 carats, a grey industrial stone found in 2011. Between the two pipes, 82% of the diamonds are gem- or near-gem quality. During the GIA visit to the sorting operations in Arkhangelsk city, about 20 diamonds of various qualities larger than 10.8 carats were among the two weeks of production on view. 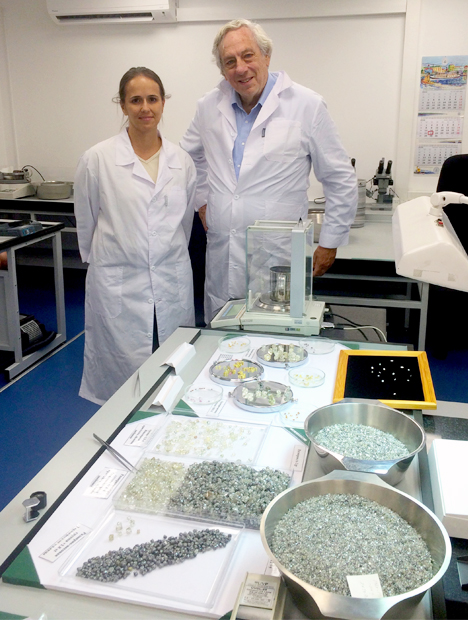 Lomonosov’s production will likely double over the next several years as the processing plant is enlarged and they begin to hit the richer ore, explains Igor Nikolaevich, chief engineer of Severalmaz. He says that developing the other pipes is still years away.

Editor’s Note: ALROSA is the world’s largest diamond producer by volume – 38.3 million carats (30% of the world total) – and is a joint public-private company. It sold a 14% stake in the company in a 2013 SPO and 10.9% in a 2016 SPO, with the central government, Sakha province and various municipalities holding the difference.

Russell Shor is senior industry analyst at GIA in Carlsbad.
Dr Karen Smit is a research scientist at GIA in New York.

We would like to thank everyone from ALROSA who made our visit both possible and enjoyable. Evgenia Kozenko and Irina Dolgopolova from International Relations kindly organised this trip and accompanied us and translated during our tour of the operations. Ilya Zezin and Vladimir Kim, deputy and chief geologists, as well as Valery Kalashnikov, the chief surveyor at the mine, took time to show us around the deposit and shared their knowledge. Pavel Grib kindly hosted us at the diamond-sorting centre in Arkhangelsk. We also wish to thank Svetlana Antipina, head of the press service at Severalmaz, for her organisation in Arkhangelsk. We would like to thank Anatoly Posadsky and Ludmila Demidova at the United Selling Organisation in Moscow for guiding our tour through their facilities.

A Glimpse into the Russian Diamond Trade (in English)

Overview and commentary on the 2013 Russian Diamonds and Jewellery article “New Reality of the Russian Jewellery Market.”

Geologists braved the rugged and remote terrain of Canada’s Northwest Territories for years until they found diamonds.

Examination of the Largest Canadian Diamond (in English)

Explores the history, geology, and current production of this unique source of large diamonds.