Dr Çiğdem Lüle’s work day is no typical 9-5 shift: the mineralogist and GIA Graduate Gemologist could as easily find herself on an archaeological excavation site as at the front of a classroom.

Lüle, a jet-setting researcher, educator and recipient of the 2016 Antonio C. Bonnano Award for Excellence in Gemology, spends much of her time travelling the world, both as director of development for Gemworld International and as a sought-after speaker for conferences, symposia and trade events. She has dedicated much of her career to the identification and origin investigation of gems from archaeological sites, a multidisciplinary research subject known as archaeo-gemmology.

In her efforts to build a network of professionals in the subject, Lüle has also become one of archaeo-gemmology’s primary developers and advocates – saying it provides “something that, traditionally, gemmology, archaeology or mineralogy alone could not.”

“Humanity’s interest in researching prior civilisations motivated the development of many social sciences, and archaeo-gemmology is another approach in this quest,” Lüle says. “It combines the basic principles of gemmology and the latest technology in mineral identification to assist in the interpretation of archaeological artifacts, mainly ancient gems. It goes well beyond translations of old texts and uses analytical and scientific methods to examine gem artefacts in depth. The origin information can help archaeologists, as it sheds light on the cross-cultural relations of ancient civilisations.”

On one particularly memorable trip in 2000, Lüle joined an archaeological excavation site in Van, Turkey – an important Bronze Age site where the Uratian civilisation flourished between the 13th and 6th centuries CE.

“I was there to identify stone objects, mainly gem materials,” she says. “I had no idea how rich this collection would be until I got there, but every single person was buried with hundreds, if not thousands, of stone beads – mostly locally found agate, chalcedony, carnelian and quartz beads, with many glass and ceramic imitations. It was a wonderful experience to sort through so many ancient beads.”

Before Lüle launched into international travel and research, she was a geological engineering student at Ankara University in her native Turkey. When she landed a part-time job in a silversmith workshop in her final year, her interest in mineralogy, petrography and geochemistry turned towards ornamental minerals and gems.

“There were many stones fashioned as gems, and I was really intrigued by the fact that common minerals could look so beautiful and so different after cutting. Yet, I couldn’t identify them after they were fashioned,” she says. “That’s when I discovered that gemmology was the discipline that enables us to identify them through non-destructive techniques – and I got the ‘gem bug'.” 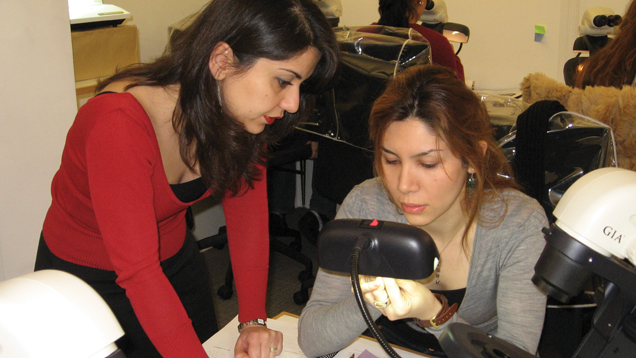 Çiğdem Lüle, PhD, FGA, GG, taught gemmology at GIA’s “cosmopolitan, multinational” London campus for several years. “I’ve always enjoyed teaching for the opportunity that it offers to exchange information and ideas with others,” she says. Photo by Edward Johnson/GIA

After graduation, Lüle earned two diplomas from the Gemmological Association of Great Britain before returning to Ankara University as a gem specialist and mineralogy research assistant. She finished her master’s degree in mineralogy there, finally relocating to the United Kingdom in 2001 to work as a sales assistant and gemmologist for London’s R. Holt & Co.

Soon after, she came into contact with GIA, earned her Graduate Gemologist diploma through the Distance Education programme and started working as an on-campus instructor in 2004.

“It was a great experience,” she says, of both her time as a student and instructor. “GIA courses train you not only for gemmology, but also for the market. There is an emphasis on professionalism, customer service and integrity.”

Lüle, a dual citizen of Turkey and the United Kingdom, appreciated the diversity she found at the Institute’s London campus – and the professional growth it encouraged.

“It was a very cosmopolitan environment that attracted students from around the world,” she says. “It was a very colourful and interesting campus, and its multinational nature taught me that we’re all the same but may communicate differently. I learned to empathise while teaching, and once I started to put myself in my students’ shoes, it was a lot easier to convey information.”

Committed to continuing her education, Lüle earned her doctorate in mineralogy from Hacettepe University while she was teaching at GIA. She worked for the Institute until leaving for the United States, and Gemworld International, a market research and price trend provider for the gem trade, in 2010. 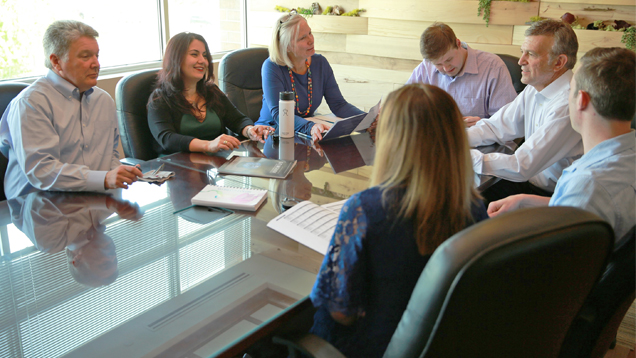 “The core Gemworld team is small but very efficient and experienced,” says Çiğdem Lüle (second from left), who moved to the United States in 2010 to manage the Illinois company’s special projects and then became their director of development. “Their understanding of the global gem market has no equal, in my opinion.” Lüle says that all of the company’s appraisers are GIA Graduate Gemologists and members of the GIA Alumni Association. Courtesy of Scott Drucker, © Gemworld International.

“I wanted to carry their unequalled understanding of the global market and experience into practical work,” says Lüle, who focuses on education and special projects like the development of Gemworld’s colour communication system. “I develop hands-on, practical workshops and teach pricing strategies based on market dynamics. I believe in verified scientific information, so my research is always in-depth when I work on a project, and my classes are always updated with new information and research.”

Lüle believes that, for GIA students, their own diplomas are “a beginning”.

“It’s a great kick start with good qualification, but you’ll need to build upon it with continuous education and practical experience in such a dynamic gem and jewellery market,” she says. “And you can’t be successful in this business without a passion for gems – it goes beyond identification or selling. I don’t know a single successful gemmologist who wouldn’t get excited when they examine an unusual or newly identified gem. Just watch their face while they handle the stone and test it.”

For Lüle, the gemstone that still captures her interest, and holds possibilities for research, is the garnet.

“Gemmologists only know of a few of them, but garnets are a large group of minerals, and their complexity is in their mineral structure – they are a great geological record of the conditions in which they’ve grown,” she says. “Despite the common belief that these early gems were sourced from India, certain archaeological and mineralogical findings suggest a much more complicated set of locations. Every time I test a garnet, I get excited, without fail.”