Evan Smith was “blown away” by the first big diamonds he was able to work with at GIA.

“I was used to working with much smaller, lower-quality diamonds,” says Smith, who began working in the research department in New York in 2015. “I was very excited to be able to peek behind the curtain to see the variety of diamonds − and the very expensive ones − that are impossible to access for research anywhere else.”

Smith, whose expertise is in diamond geology, is working at GIA as part of the Richard T. Liddicoat Postdoctoral Research Fellowship programme, which was created in 2014 in honour of GIA’s former president, who was widely considered the “Father of Modern Gemmology”. It gives researchers who study mineralogy, geology, physics, materials science and other fields related to gemmology access to GIA’s gemmological data, equipment, and the rare, unusual and large gems that come into the laboratories. Each position is tailored to focus on the research fellow’s expertise and interest, with the opportunity to examine fundamental issues related to diamonds, coloured stones, pearls and instrument development.

“We have had the opportunity to bring in some exceptional and highly motivated academic researchers through this programme,” says Dr Wuyi Wang, GIA’s director of research and development. The postdoctoral researchers work side-by-side with the Institute’s experienced researchers and gemmologists, and together, they explore and learn from the gems that come into GIA’s lab.

The Liddicoat Postdoctoral Research Fellowship programme is part of GIA’s extensive and ongoing research into the characteristics of diamonds and other gems. To that end, Liddicoat Postdoctoral Research Fellows are expected to conduct creative, independent, publishable research and are strongly encouraged to collaborate with GIA scientists as well as outside research institutions and universities.

Smith says the opportunities he has had to see some very rare diamonds and to learn from “the wealth of experience of people who have spent years inspecting and observing diamonds” will hopefully help him “shed some light on some aspects of diamond geology that perhaps have gone unnoticed by the geological community.”

Evan Smith: Diamond Inclusions and the Clues to the Earth’s Formation

Evan Smith, originally from Canada, near Toronto, specialises in diamond geology, which he says covers everything from the processes that make diamonds deep in the earth, to the ones that bring them to surface. As a geologist, he uses diamonds to help him understand how the Earth formed.

“Diamonds are a physical sample of carbon from the deep earth, and carbon is intimately involved in the evolution of the earth as we know it, from 4.6 billion years ago to today,” he says. “This means that diamonds give us a record of a broad range of processes, such as the formation of continents and the beginnings of plate tectonics.”

He worked in the mineral exploration industry looking for deposits of gold, copper and other commodities after college and then at the Ekati diamond mine in northern Canada characterising the various details of the rocks that contain diamonds. He became interested in the postdoctoral research programme at GIA because of the potential to study diamonds that would otherwise be difficult – or impossible – for him to access.

“Diamonds are one of the most scientifically valuable minerals on the planet, but getting access to them for research purposes is often challenging because of their great value as gemstones,” he says. “The large numbers of diamonds that come through GIA for grading means that rare and unusual diamonds are almost a routine occurrence here.”

Smith is focused on inclusions in diamonds, materials the diamond has brought to the surface.

“When diamonds grow, sometimes they trap pieces of the surrounding minerals or fluid deep in the earth. When I say deep, I mean about 100 miles into the earth, and in some cases perhaps even all the way down to the core-mantle boundary at about 1,798 miles,” he says. “When diamonds are carried to the surface in a volcanic eruption, the diamond acts to protect and shield any inclusions trapped inside. No other mineral can provide such pristine samples of the deep earth.”

Smith is systematically characterising the inclusions he sees in rare types of diamonds to fill in some of the missing pieces in our understanding of how diamonds form and what they mean for the evolution of the planet. He says that before he came to GIA, he was limited to working on smaller, less valuable diamonds, which is a problem because some particularly large, high quality diamonds might form in a different and unique way. Being able to access a wide variety of diamonds at GIA gives him the opportunity to see diamonds that have formed in a broader range of geological settings.

Smith is also searching for fluid, such as nitrogen, water, carbon dioxide and methane, in diamonds, which also provides clues as to what happens deep in the Earth.

“A few years ago, I identified very small inclusions of liquid nitrogen trapped in diamonds from at least three different continents. The nitrogen is held under tremendous pressure, which allows it to be in liquid form at room temperature,” he says. “These fluids give clues about how different kinds of diamonds form and even how the atmosphere formed and changed over time.”

Smith says the diamond research he does – and the clues to the Earth’s formation he is seeking – would not be possible if people didn’t want diamonds for their jewellery.

“The desirability of diamond as a gemstone is the very reason it is mined. Otherwise, diamonds would remain buried in rocks and hidden in river gravels,” he says. “Nobody would ever get to study them or discover their fascinating secrets about the Earth.” 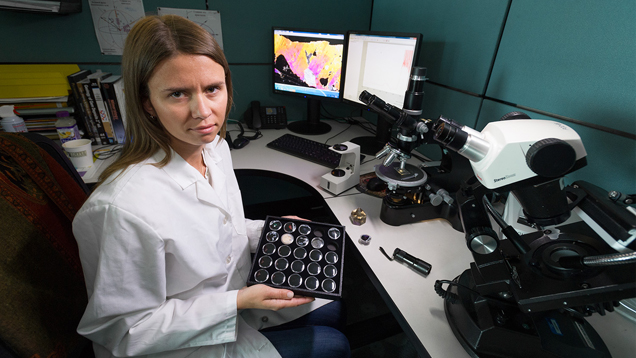 Elena Sorokina focuses on theories and ideas about the genesis and evolution of gem corundum, as well as mineral development within crystalline materials in natural environments. Photo by Kevin Schumacher/GIA

Elena Sorokina: The Genesis and Evolution of Corundum

Elena Sorokina, from Russia, graduated from the Russian State Geological prospecting University (MGRI - RSGPU) in Moscow in 2007 and started her Ph.D. programme in gemmology. She continued her Ph.D. education when she transferred to the Fedorovsky All-Russian Research Institute of Mineral Resources (FGUP VIMS) in 2009 as a junior researcher. In FGUP VIMS, she worked as a classical mineralogist conducting research on ore deposits from the geological prospecting stage to studying ore processing products.

Sorokina joined the Fersman Mineralogical Museum of the Russian Academy of Sciences in Moscow as a research fellow in 2012. After a scholarship award from the German Academic Exchange Service (DAAD), she became a visiting researcher (2013-2014) at the Centre of Gem-Materials Research in Johannes Gutenberg University Mainz in Germany, which is an active part of the Institute of Gemstone Research Idar-Oberstein. In University Mainz, her research experience extended to non- and micro-destructive techniques, such as laser ablation-inductively coupled plasma-mass spectrometry and the use of other spectroscopic equipment.

Sorokina became a postdoctoral research fellow at GIA in Carlsbad in September 2015 and is focusing on theories and ideas about the genesis and evolution of gem corundum, as well as mineral development within crystalline materials in natural environments. She is studying questions related to mineral crystallisation and/or recrystallisation, growth and purification during geological events.

“GIA provides excellent opportunities for young scientists at their early-career stage, allowing them to demonstrate the level of independence required to develop competitive and innovative research,” she says. “All the facilities and equipment are available at the GIA laboratories in New York and Carlsbad, including non- and micro-destructive techniques, which is a great advantage in studying gemstones.”

“GIA provides the perfect environment for inter-disciplinary collaborative work in this area, providing more facilities for excellent research and internationalisation,” says Sorokina, who left GIA in the autumn of 2016 to pursue gemmological research in Russia. 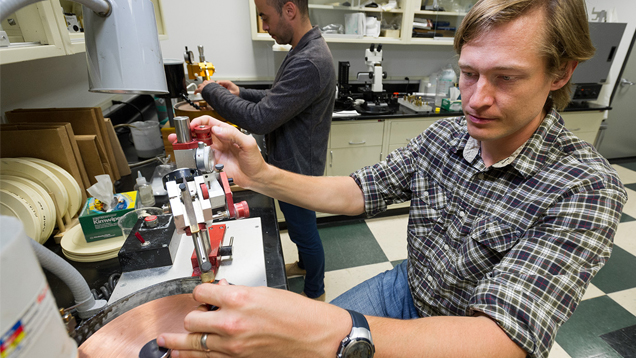 Aaron Palke’s work on melt inclusions in Yogo and other Montana sapphires, in particular, has provided some evidence for their formation through the partial melting of Al-rich lower crystal rocks. Photo by Kevin Schumacher/GIA

“I became fascinated by Montana’s majestic mountain ranges and I was always raring to go collecting minerals with my father,” he says. “So naturally I decided to become a geologist.”

Palke studied mineralogy for his Ph.D. and focused on spectroscopic techniques (especially Nuclear Magnetic Resonance) to investigate the atomic-range structure of minerals during this time.

He was intrigued when he learned about GIA’s Liddicoat Postdoctoral Research Fellowship programme when he was deciding what he was going to do next.

“The programme seemed like a natural choice for someone with my interests, as gemmology essentially belongs to the field of applied mineralogy,” he says. “My research at GIA has predominantly focused on using trace element chemistry and gemstone inclusion suites to pursue research into gemstone formation. I have been using GIA’s LA-ICP-MS facilities to analyse unusual trace elements in gem corundum, as well as analysing inclusions in sapphires to understand the geological conditions of formation for these deposits.”

His work on melt inclusions in Yogo and other Montana sapphires, in particular, has provided some evidence for their formation through the partial melting of Al-rich lower crystal rocks.

Palke credits GIA with giving him invaluable experience and access to gemmological information to help advance his career. He said his time at GIA would serve him well in his new position at the University of Queensland and the Queensland Museum, where he will start later this year.

“There is probably no other place where a young scientist can have access to the resources GIA offers in terms of lab equipment, samples to work on, and people with unique talents and knowledge to work with,” he says.

Find out more about the requirements and application process for the Liddicoat Postdoctoral Research Fellowship or email researchcareers@gia.edu for more information.

Research that Informs and Inspires

GIA has studied more than 400 important gemstones in the Edward J. Gübelin Gem Collection and is committed to sharing this repository of gemmological information.

Build Your Research Career at GIA

GIA offers a unique environment for scientists and researchers to further their investigations in the world of gems.
Learn More