Two pearls were submitted for routine gemmological identification (Figure 1) at the GIA Laboratory in Bangkok and the work soon became both interesting and slightly uncomfortable as the pearls revealed an inner secret to the gemmologists conducting the work. This article details the procedures used and the feature that made these two pearls stand out from the usual pearls examined on a daily basis.

Both pearls were semi‐baroque in shape with one tending more towards a drop shape and the other appearing more like a flattened oval shape. The former weighed 20.28 carats and the latter 18.65 carats when submitted. The colour of the 20.28 carat pearl was silver and that of the smaller pearl was cream. Each pearl exhibited a good lustre; however this was subsequently confirmed to have been improved by heavy polishing which was clearly visible with the aid of a microscope. The first slight clue to their structures came from an estimate of the weight of the pearls in relation to their size. Both pearls felt a little light for their size, and the silver coloured pearl in particular did appear to have an external appearance that would fit with a pearl that was likely to have a hollow interior.

All the pearls submitted to GIA undergo tests that are designed to provide specific data that can be used to confidently issue a final report. Some of these procedures are carried out on all pearls and others are used when the pearl warrants the procedures. Standard procedures for all pearls include microradiography, to provide an idea of the internal structure, and Energy Dispersive X‐ray Fluorescence (EDXRF) Spectrometry to show the surface and near surface chemistry. The latter test provides information that allows the separation of saltwater pearls from their freshwater counterparts. When pearls with body colours other than white or cream are examined, additional tests are used to provide information on the colour origin, since the colour of pearls can be either naturally produced by the mollusc or induced/altered by humans via dyeing, irradiation, bleaching or less frequently coating, after formation.

Analysis of the two pearls and their reactions

When pearls are examined in laboratory conditions via the procedures just described there are usually no adverse reactions at all to any of the methods employed. Therefore, it was rather strange to find a very unfamiliar sight when the lid of the EDXRF Spectrometer was lifted to retrieve the silver-coloured pearl after its analysis. Instead of seeing an unaffected pearl that was ready for removal from the analysis stage, a rather wet and dirty pearl was evident, which did not resemble the clean pearl that had been positioned on the stage prior to the analysis. What could have caused this reaction? To answer this it is necessary to point out to anyone unfamiliar with the EDXRF method that for light elements such as Ca and Mn a vacuum environment is needed in the sample analysis chamber to obtain accurate results. It was this action that caused the pearl to react and discharge its rather messy internal secret. However, the mess was just part of the story as it was accompanied by a rather unpleasant and quite persistent odour!

As if this were not enough a similar reaction awaited the gemmologists when the 18.65 carat pearl was placed in the sample chamber later in the day. However, there were some differences to the reaction and as can be seen in Figure 2 the exuded contents of the pearl did not appear in a liquid form but rather appeared to solidify over the surface. This is evident even more clearly in Figure 3 which shows a solidified brown substance standing proud of and blocking the drill‐hole. 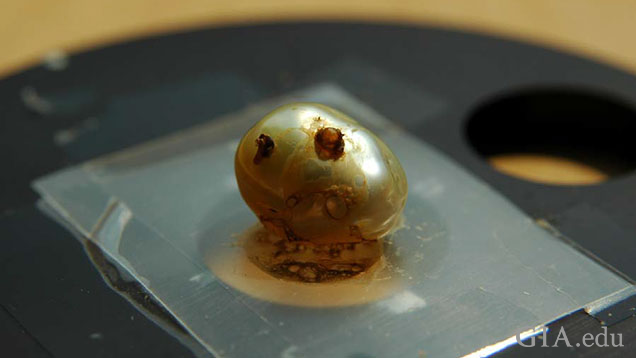 Figure 2: The post-analysis appearance of the 18.65 carat pearl as seen within the EDXRF sample chamber.

Despite the unusual reactions to the vacuum environment in the EDXRF, the spectra acquisition proved successful and data typical of pearls from a saltwater environment resulted. Although this was the most likely result given the pearl’s external appearance, laboratory protocol stipulates that even if a pearl is ‘known’ to be of a certain origin (saltwater or freshwater) it is not enough to just accept this as ‘fact’ without running tests to confirm the facts. Hence all individual pearls, and random samples from items containing multiple pearls, must be analysed.

Additional analysis of the brown material (figure 4) with a Renishaw InVia Raman microscope using a 514 nm laser provided nothing that we could use to identify it with conclusively. However, since the odour from both pearls was definitely of an organic nature, this result did not come as a surprise. Many organic materials, including conchiolin a common component of pearls, do not produce useful Raman spectra.

Before proceeding with the necessary step of returning the pearls to their former glory by carefully cleaning them, they were analysed by microradiography to observe their internal structures. This is a critical step in the identification of any pearl. Given the reactions of both during the chemistry work, and the silver colour of the larger pearl which is typical of many hollow pearls, it was almost certain that each pearl possessed an internal void/cavity. The only doubts remaining concerned the size and form of the features and whether they would prove whether the pearls were natural or cultured in some way. The results proved interesting.

Figure 4: Close‐up of the brown material plugging and capping the drill‐hole of the 18.65 carat pearl. Magnified 21x.

The silver-coloured pearl was examined first and it became immediately apparent that the void within it was large and traced the pearl’s actual shape quite closely (Figure 5). Experience over many years has shown gemmologists that, on the whole, large cavities in large pearls that tend to follow a pearl’s shape, usually observed in semi‐baroque to baroque‐shaped pearls, are a good indicator of natural formation (Kennedy, 1998). Additional microradiography in two more directions (Figure 6 and Figure 7) showed the large three‐dimensional structure of the cavity, and together with areas of concentric structure visible in areas of the void, was enough for us to conclude that, together with the organic odour, the stimulus for the creation of this particular pearl was more likely to be something organic and accidental. Hence the conclusion of a “Natural hollow pearl” was given on the GIA report.

The smaller pearl also proved to possess an interesting internal structure (Figure 8). However, the origin of this pearl was more debatable and hence it was clearly apparent from the experience of the gemmologist operating the X‐ray equipment that extra directional images would be required in order to provide enough visual clues to reach a conclusion. Therefore, the pearl was moved into five different positions 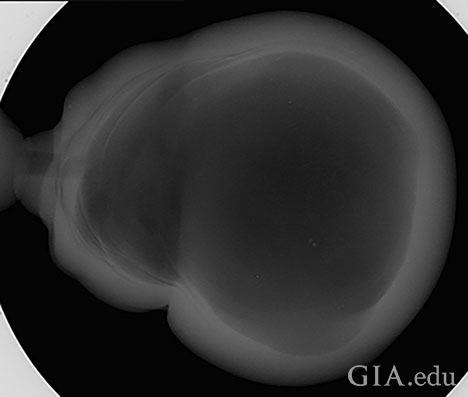 Figure 5: The large internal void with some structural walls towards the outer border as revealed by microradiography.

Figure 6: Microradiograph taken in the second direction (90° to 1st direction). 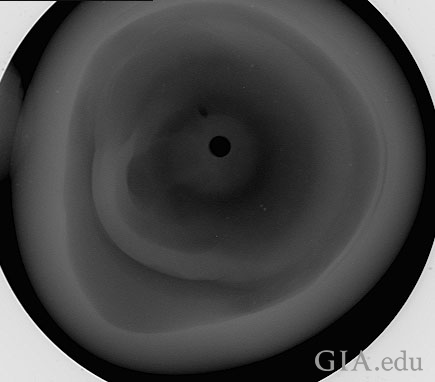 Figure 7: Microradiograph taken in the third direction (down the drill‐hole). The drill‐hole is the small black circle towards the center. 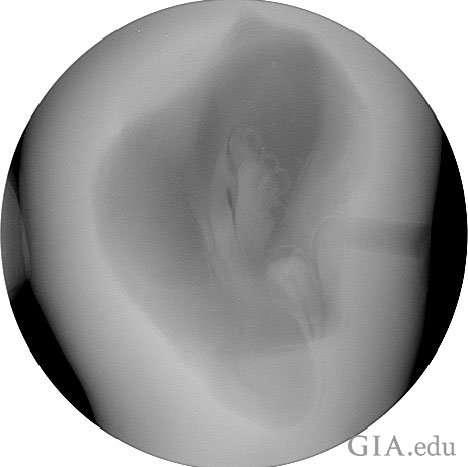 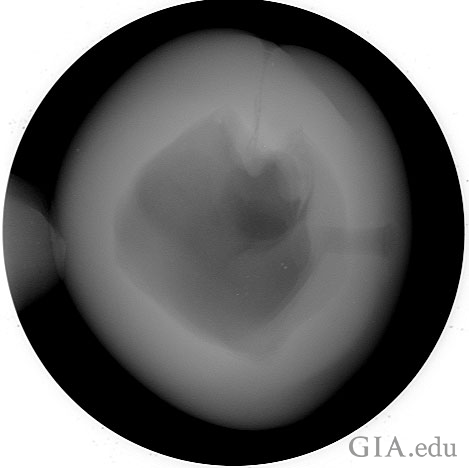 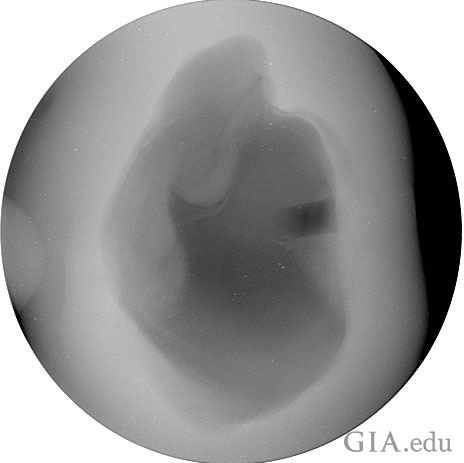 Figures 8-12 can be found in the gallery above.

and microradiographed carefully in each to provide useful images that would allow the gemmologists to reach their conclusion. Differences in the structure are quite evident from some of the microradiographs included in this report (Figure 8 to Figure 12). The noticeable differences in the structures of this pearl and the former pearl are the sizes of the voids; the shapes/outlines of the voids; and to a lesser extent, the inner structures of the voids. Whilst the inner features of the voids might vary quite considerably, it is the overall shape and sizes of the voids that are of primary interest. Unlike the first pearl described, the more irregular outline of the void in this pearl and the smaller area it occupied looked more characteristic of a non‐bead cultured pearl, probably of a type often referred to as a “Keshi” pearl in the trade, despite its size. Therefore, unlike the first pearl, and despite an organic‐related odour similar (not exactly the same though) to the first example, a non‐bead cultured pearl report was issued for this particular pearl.

Two interesting pearls submitted for routine identification turned out to be more interesting than could be imagined. Both were found to be hollow to varying degrees and both reacted negatively to the vacuum conditions within the sample chamber of the EDXRF spectrometer during routine chemical analysis. This is the first time that pearls submitted for identification have reacted in such a way and shows what surprises gemmological analysis can sometimes produce within certain materials. Whilst certain pearls that omitted unpleasant odours have been encountered in the trade previously (Unknown, 1982), the sensation was usually experienced at the time of drilling/processing when the internal voids were breached and exposed to the elements. These two pearls are the first examples we are aware of in which routine testing caused the organic components to stimulate the senses of the gemmologists working on their identification.

This diploma programme covers pearl value factors, grading skills, trends and other essential knowledge that will help you to buy and sell all varieties of pearls.