The definition of a phenomenon as “an object or aspect known through the senses”, according to Webster’s dictionary, might explain why some gemstones are called phenomenal. Or it could be because these gems are “exceptional, unusual or abnormal”.

In reality, however, it is how the structure, inclusions and properties of these gemstones interact with light to return an unusual visual effect, or phenomenon, in the parlance of gemmology, that make them phenomenal.

Regardless, we experience these gemstones as fascinating and recognise that they are, in fact, extraordinary. 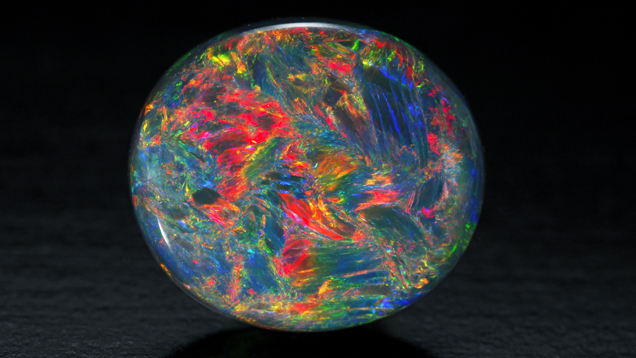 Opal, labradorite and moonstone form in microscopic layers of material that are successively stacked upon each other, giving rise to phenomena based on these unique structures. When light interacts with the different structures of gem material it causes flashes of colour.

Labradorite is formed by alternating layers of two feldspars that have different chemical compositions. When light interacts with labradorite, the diffraction of light causes the phenomenon known as labradorescence. The perceived colours are dependent on the thickness of the alternating layers and their refractive indices.

Iridescence happens when light passes through a thin, transparent film that has a different refractive index from the surrounding material. The colour patterns in soap bubbles or on a thin film of oil on water are examples of iridescence. Pearl nacre and mother-of-pearl can have just the right structure to display iridescent optical effects. Orient is a special term used to describe pearl iridescence.

This chrysoberyl ring features a very fine cat’s-eye, which visually divides the cabochon in half and reflects a light and dark colour called “milk and honey”. These attributes make the cat’s-eye chrysoberyl a collector's gemstone. Courtesy Richard Krementz Gemstones. Photo by Robert Weldon/GIA

Aventurescence is a type of phenomena caused by light reflecting from small, eye-visible, plate-like inclusions of copper or sometimes hematite inclusions in sunstone feldspar. (In sunstone feldspar the aventurescence is also known in the trade as schiller). In aventurine quartz, spangles of green mica produce the glittery effect and may also give the gem its perceived body colour. 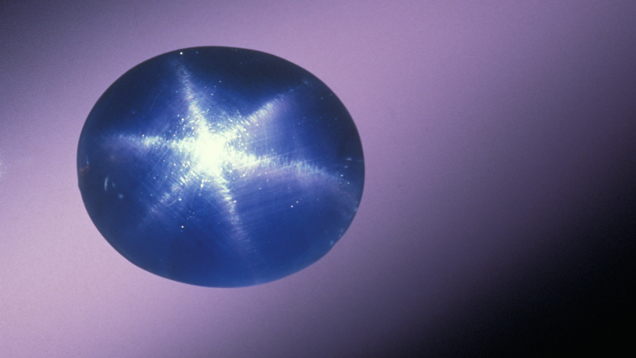 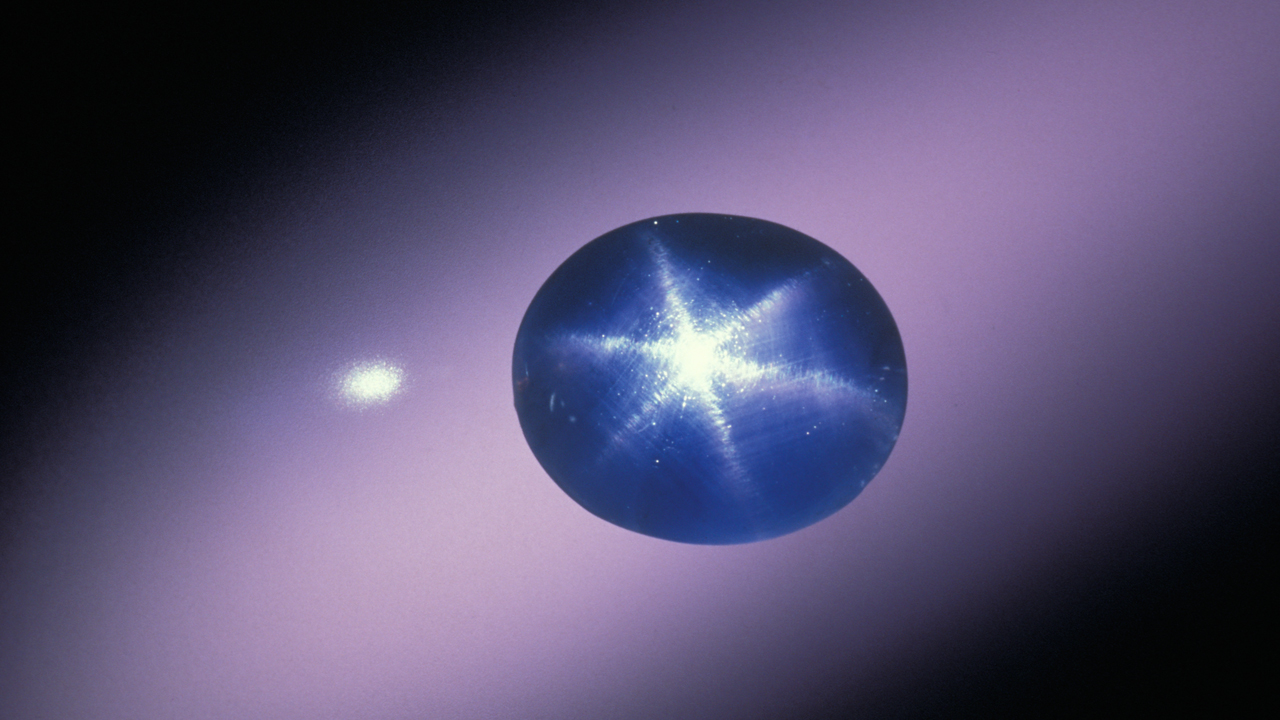 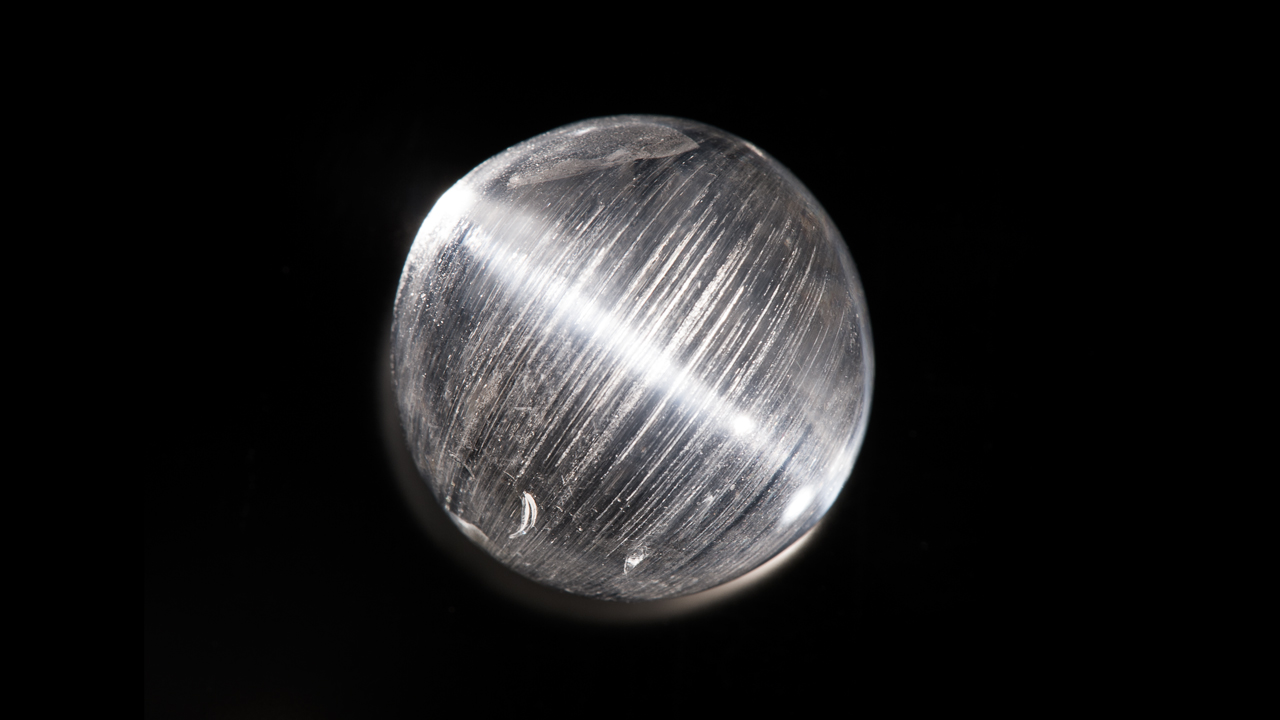 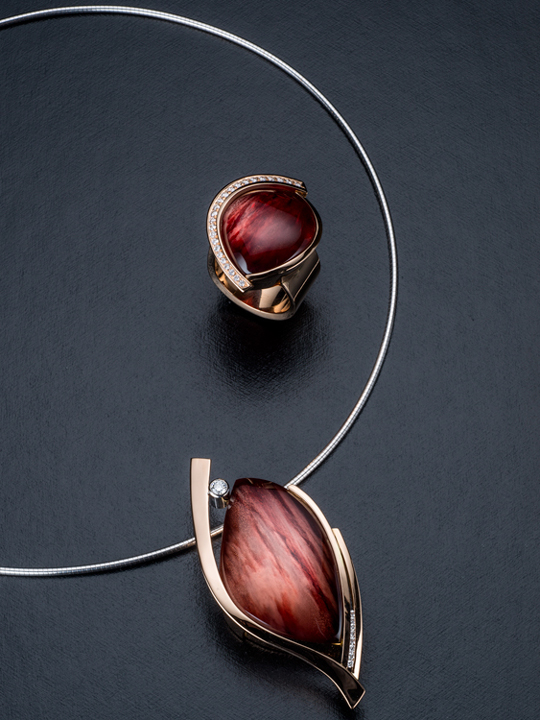 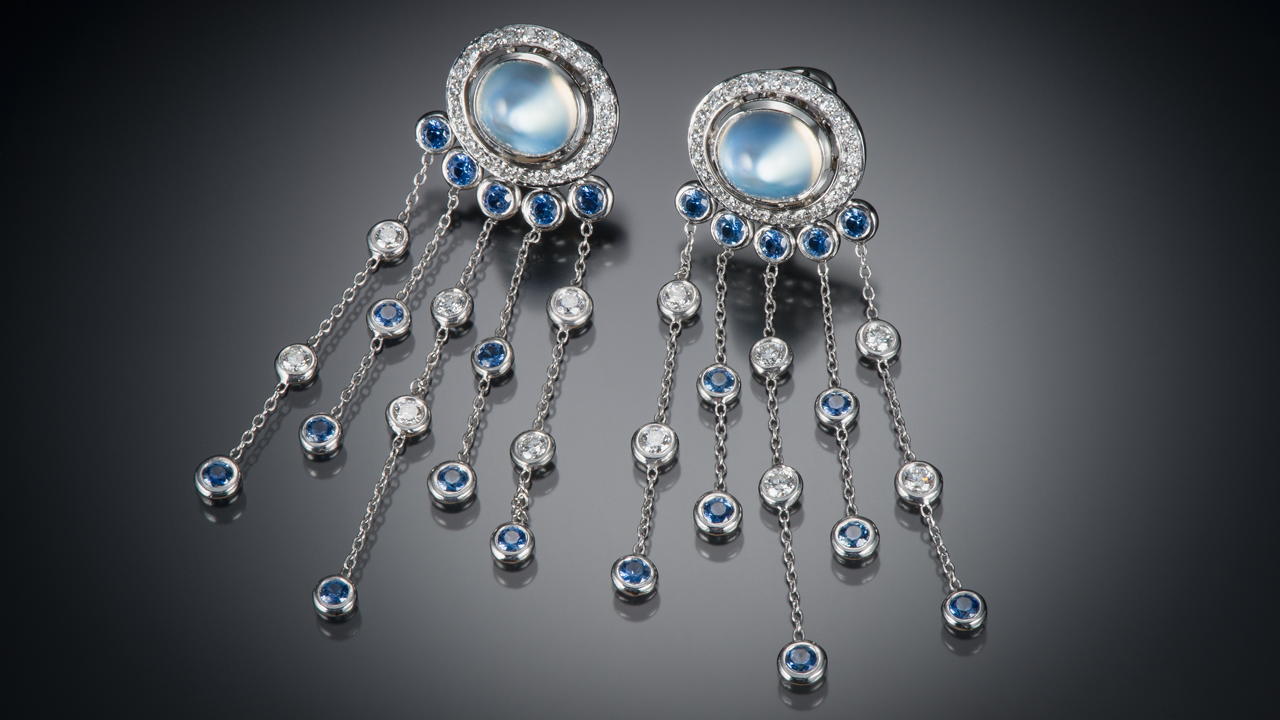 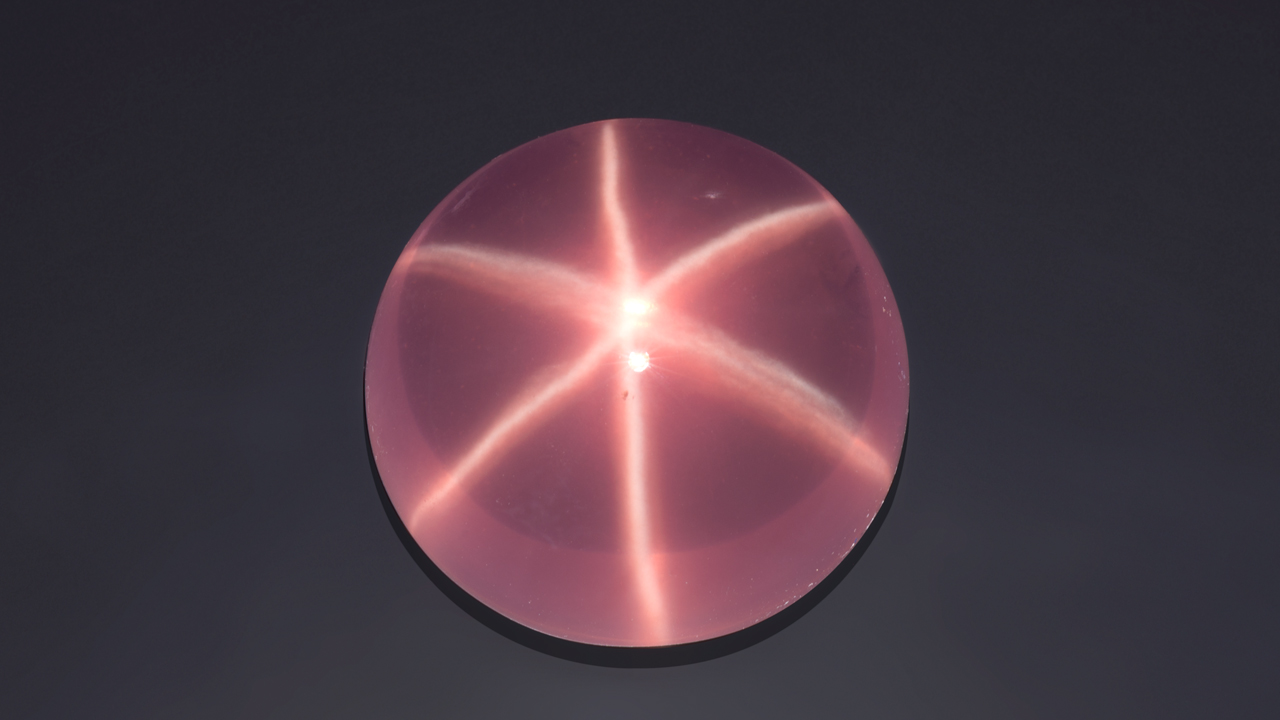 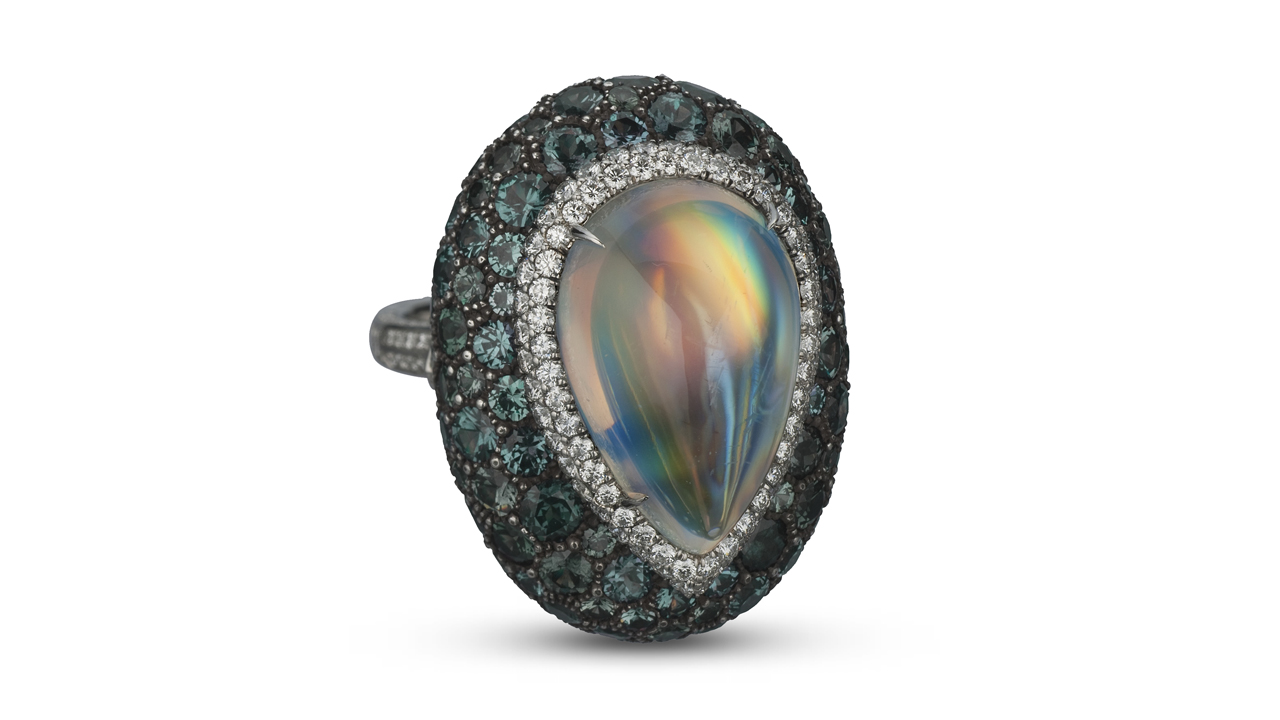 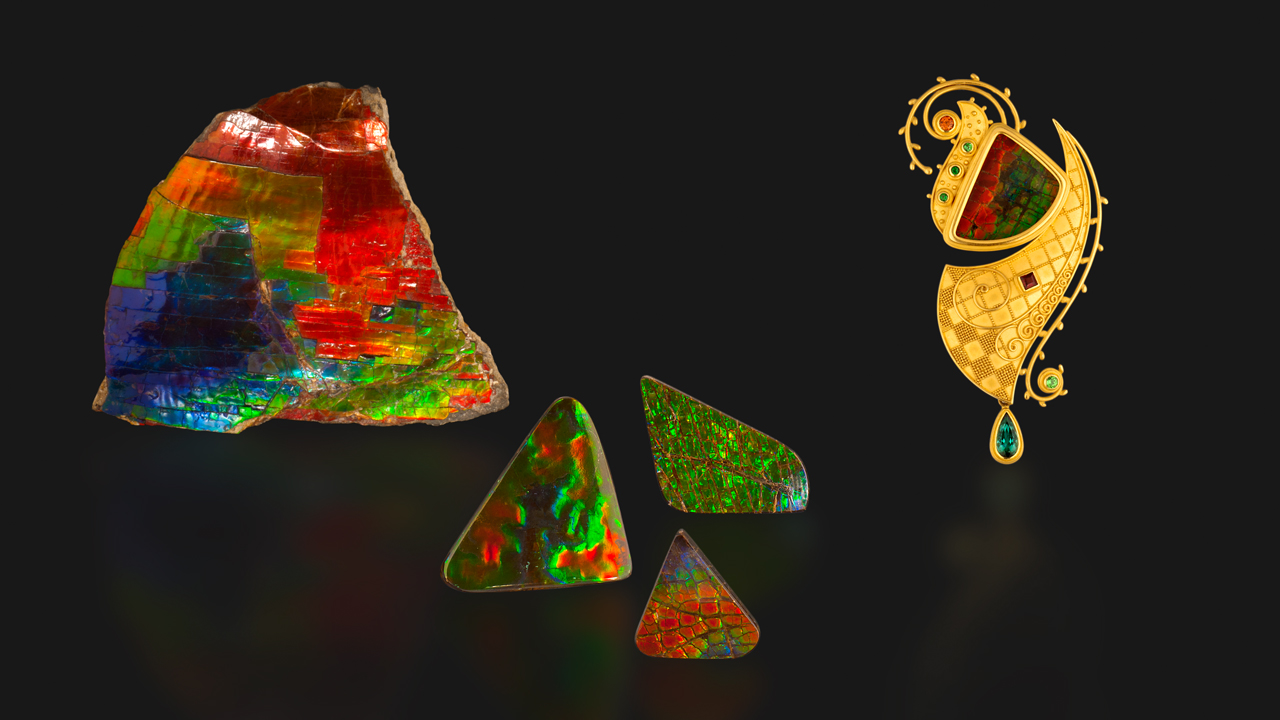 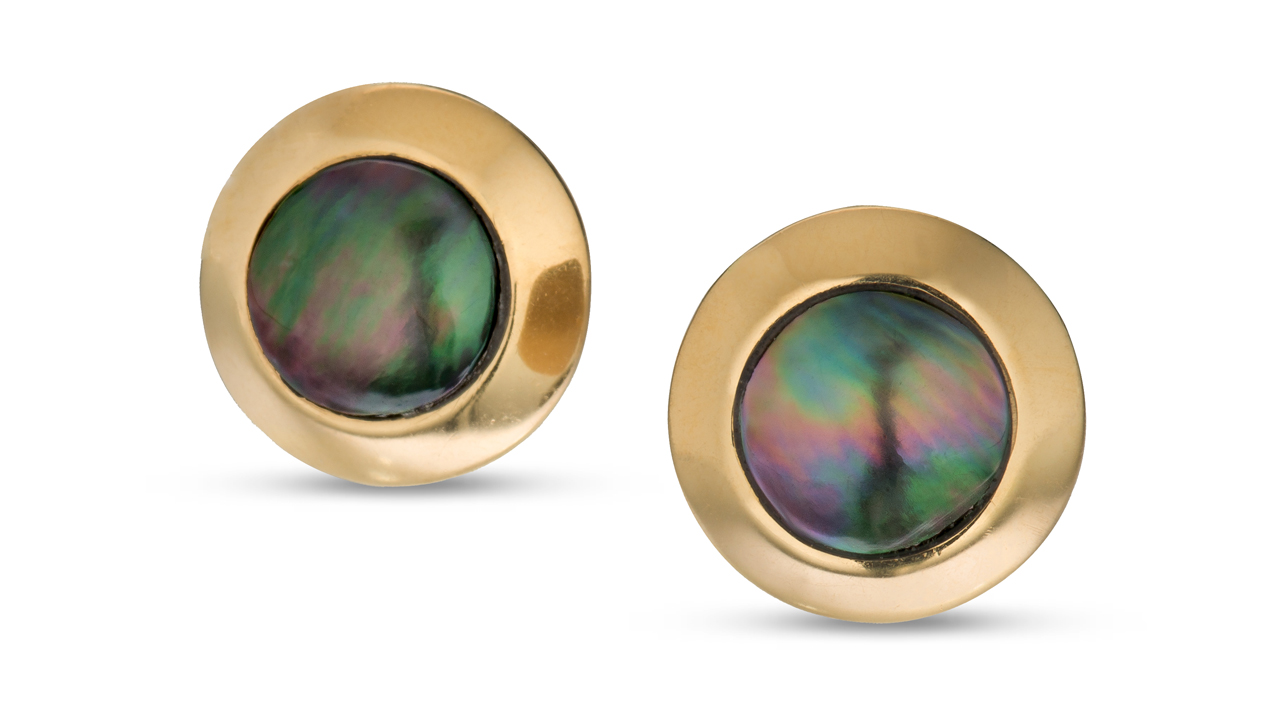 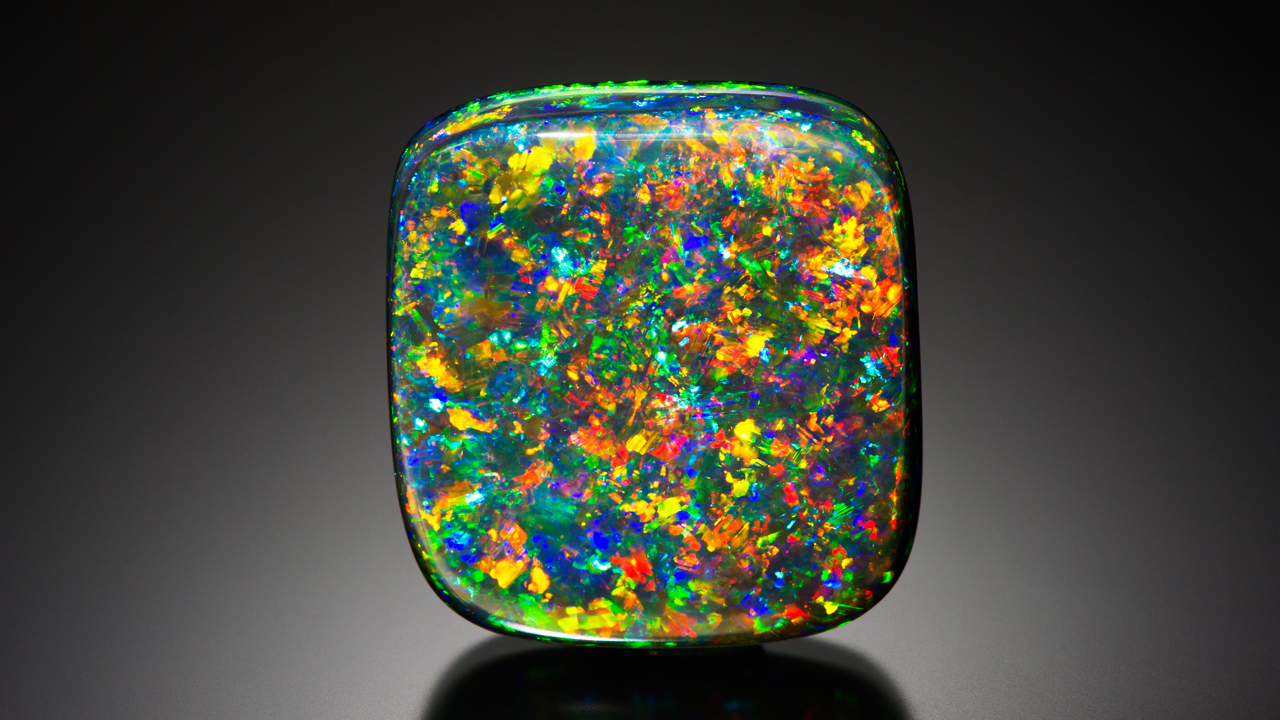 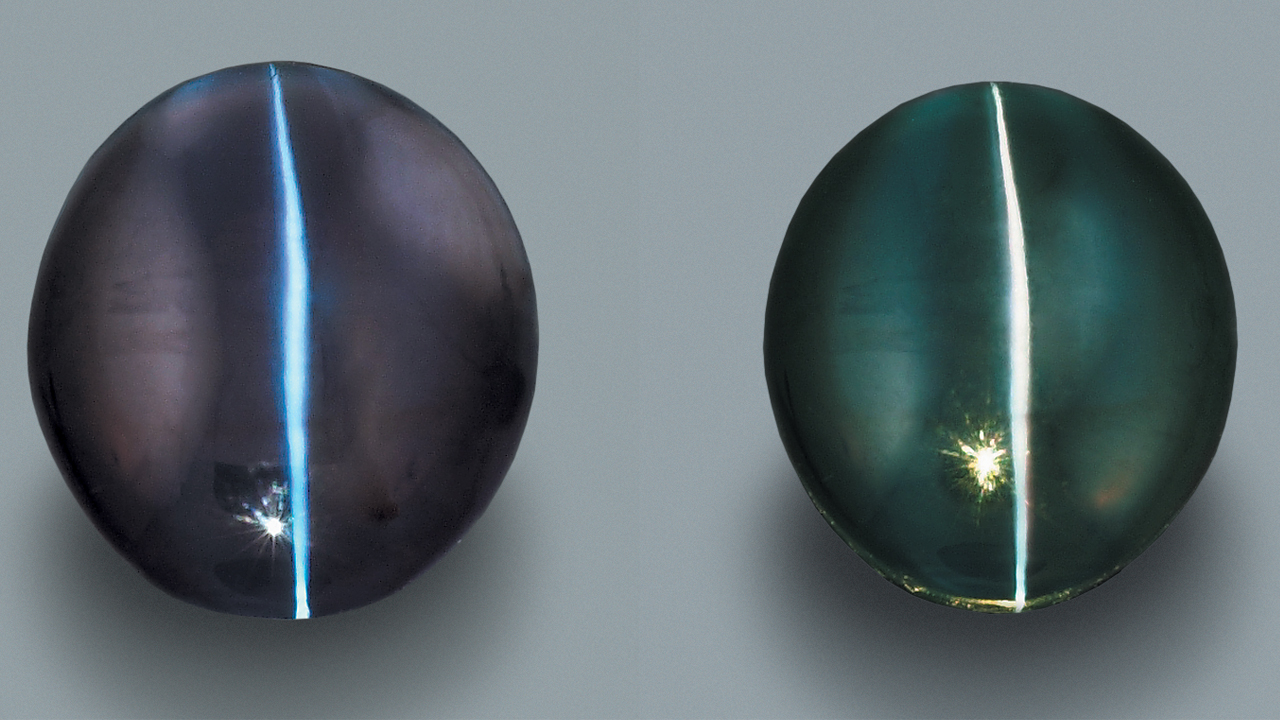 Colour change is another type of phenomena that occurs most dramatically in alexandrite. Chromium causes alexandrite’s colour, which accounts for a close balance between red and green, varying with the type of viewing light. The finest Russian alexandrites appear green in daylight and under fluorescent light. Under incandescent light, alexandrites appear red. This phenomenon coined the romantic phrase “emerald by day, ruby by night”. Although alexandrite, named after the Russian tsar Alexander II, is the most valued colour change gem, certain sapphire, spinel and garnet varieties can also show colour change.

The term cabochon comes from the French word “caboche”, meaning “head” and refers to a gemstone that has been shaped and polished as opposed to faceted. It is also common to carve softer stones as cabochons since minute scratches show much less on a cabochon than on a faceted stone.

Light properties and opacity − the ability of light to pass through the gem - are the main factors that come into play when deciding how to cut a gemstone. If a gemstone is opaque it is usually fashioned as a cabochon. Stones with asterism and chatoyancy are cut as domed cabochons to best portray the fine, needle-like inclusions that produce these two phenomena, which would otherwise not be visible in a faceted cut.

The final decision ultimately falls on the lapidary artist or the client’s preference, but they are often fashioned into cabochons to show them off to their best − phenomenal − advantage.

Jewellery that Speaks the Language of Flowers

A flower is one of nature’s most delicate delights, so it’s natural that jewellery designers have long found inspiration in them.
Read More