Pearls are one of nature’s most beautiful and intriguing gems. They glow with life and warmth, connecting us to the life of a gem like no other. Whether natural or cultured, pearls possess a mystique and allure all their own.

For much of its history, GIA has been collecting and studying pearls from around the world. Its scientists have used a variety of tools and techniques to help identify the different types of pearls, most notably X-ray images. But in the past few years, real-time X-ray microradiography (RTX) and computed X-ray microtomography (μ-CT) have provided the most advanced means of revealing internal structures and drawing useful conclusions on the pearls the Institute examines. These images help GIA technicians and scientists to determine whether a pearl is natural, bead-cultured, non-bead cultured, and so on. The addition of X-ray fluorescence and chemical analysis using energy-dispersive X-ray fluorescence (EDXRF) helps to separate those of freshwater origin from their salt-water counterparts.

Some pearls remain an identification challenge for even the most well-equipped laboratories. Researchers sometimes find surprises hidden inside—a piece of shell or another object that is difficult to identify. Until recently, they were only able to see a two-dimensional view of the pearl’s internal structure, which limited their ability to resolve the gem’s entire structure. 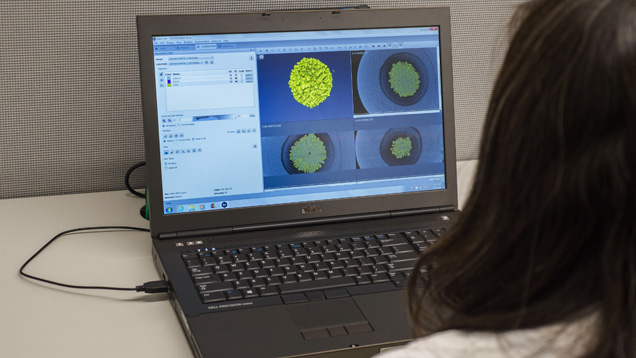 That’s where the latest technology can step in to help.

GIA recently acquired software that expands its ability to probe the internal features of pearls. This powerful research tool makes it possible to virtually explore, manipulate, extract and reconstruct specific areas of a pearl for analysis. It also gives researchers the ability to enhance the existing μ-CT data collected to see the details more clearly.

Three examples demonstrate the potential of this software. The first shows one half of a well-defined shell that caused the natural pearl’s formation. The second example is of a pearl examined in the GIA laboratory in Bangkok and described in a recent Gems & Gemology Lab Note. It clearly shows the form of the central radiating structure, as well as the extraction capabilities of the software. The third shows a challenging structure that the software helps to define more clearly.

The images below are conventional 2-D μ-CT slices of a pearl with a strange internal structure. Researchers suspected that it was a piece of shell, but the exact shape or structure of the shell was hard to visualise.

The modelling software extracted the internal structure of this pearl from hundreds of μ-CT slices and reconstructed its three-dimensional shape.

Specific internal structures in the pearl were selected to reconstruct its 3-D shape, as shown from a screenshot of the software. The top left image is the 3-D model, while the others are 2-D slice images.

The 3-D image of the shell within the pearl provides much more information than the original 2-D X-ray images. Images by Chunhui Zhou.

See the video of the internal shell.

3-D Model of Shell in Pearl
This video shows 3-D imaging of a shell within a pearl.

This pearl contains a structure thought to be a tiny organism called a foraminifera. 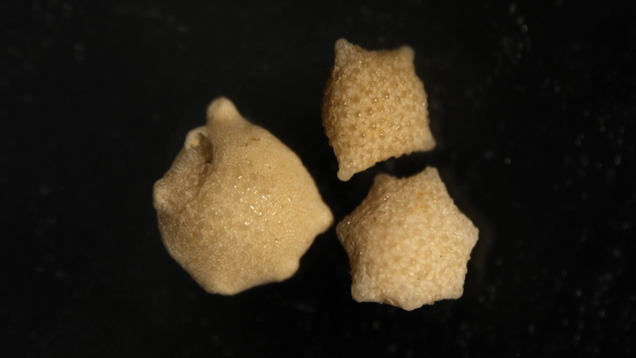 These examples are known as star sands, marine protozoa that belong to the same order as foraminifera and once lived on the ocean floor. While not usually associated with pearl formation, foraminifera were recorded in pearls as early as 1980 (A. E. Farn, “Notes from the Laboratory”, The Journal of Gemmology, Vol. 17, No. 4, 1980, pp. 225–228). Image by Emiko Yazawa/GIA. 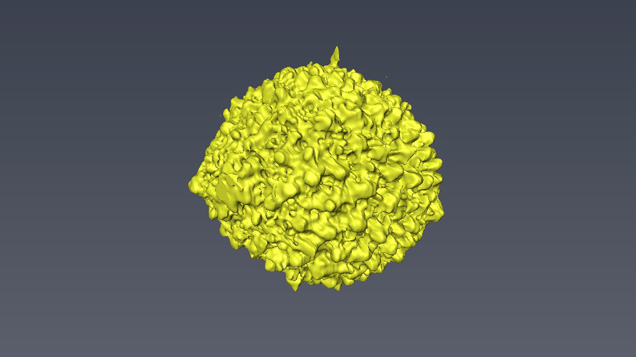 The 3-D software makes it possible to extract and reconstruct the internal features to further support our opinion. The bumpy, uneven surface strongly resembles the structure of a foraminifera. Image by Emiko Yazawa.

See the video of the internal foraminifera.

Foraminifera Structure in Pearl
This video shows 3-D imaging of a foraminifera structure within a pearl.

The software also has the potential to analyse other unusual structures within a pearl. The following example is a freshwater pearl with a large internal void, along with an associated white growth feature that is connected to the main solid portion. The 3-D model of the pearl after segmentation provides much more information on the overall shape and size of the void components. By observing the shape of the entire void, a clearer understanding of the pearl’s identity emerges. This gives researchers an opportunity to analyse the internal structure of both natural and cultured pearls in a way that wasn’t possible before.

Left: A 2-D μ-CT slice of a reportedly natural freshwater pearl shows unusual void and growth structures. Right: The 3-D model generated using the μ-CT slices shows the outer transparent area as the white growth structure, while the red area represents the black void component and the green area is the boundary between the white growth and the void structures. Image by Emiko Yazawa.

GIA researchers continue to explore these fascinating internal structures as part of the Institute’s long-term research into the “Queen of Gems”. The new 3-D software is the latest tool at their disposal. Delving into these mysteries will further our understanding and support the research-based identification and evaluation of pearls. As GIA researchers master the capabilities of this powerful software tool, they can apply their experience to these more challenging pearls.

Chunhui Zhou is a research scientist and manager of pearl identification at GIA in New York. Emiko Yazawa is a GIA staff gemmologist in New York. Nicholas Sturman, based in Bangkok, is GIA’s senior manager of global pearl services.

How GIA Identifies and Classifies Pearls

Although GIA is most recognised as the world’s foremost authority in diamond grading, it has been a leader in the identification and classification of natural and cultured pearls since 1949.
Read More