Luxury Watch Companies Tone Down the Bling in 2016

The world luxury market is retooling to adjust to changing consumer attitudes in Western nations and new economic realities in Asia and the Middle East. Nowhere is that more evident than in the ultra-luxury watch industry, which is moving away from the “dipped-in-diamonds” look of previous years to distinctive, memorable designs.

Today’s market is challenging luxury watch brands to reverse a sharp decline in demand. Sales have fallen steadily through the year and in April they were down 8% in units and 9.6% by value compared to the same period in 2015.

Not surprisingly, the biggest downturn was in precious metal and gemstone watches, which declined by more than 14% in both value and units. Exports to China, once the sector’s most promising market, were down more than 36% and 17% by value. Japanese demand declined by 5.8%, while Europe saw double digit declines. The only growth market (just barely) was the U.S., which was up 1.2%.

The reasons are the same as why other producers of luxury products are rethinking their products and marketing: 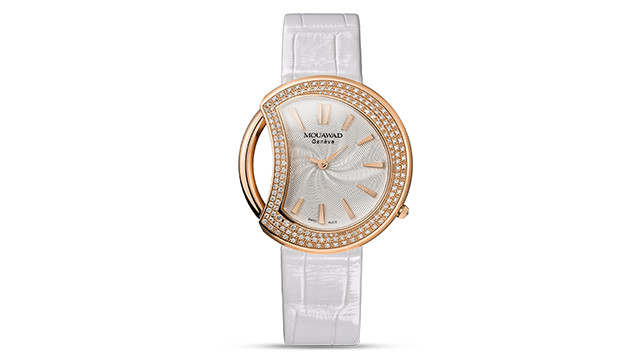 A tour of the luxury watch pavilion at Baselworld 2016, at which many of the prestige brands reveal their new styles, saw a much more muted line of products than was offered two or three years ago. 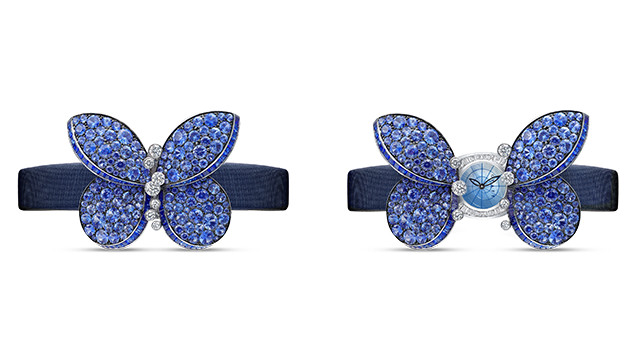 Graff introduced its Princess Butterfly watch, which contains 25 carats of blue pear-shaped sapphires and is accented by colourless diamond baguettes, at Baselworld. Push on one of the diamonds to reveal the dial. Photo courtesy of Graff

Graff, for example, which in the past was all about diamonds – a great many of them – offered a “Princess Butterfly” watch set with 25 carats of pear-shaped sapphires in its wings and small baguette diamonds surrounding the dial.

Chopard traditionally created some of the world’s most costly diamond watches, but its director of product development, Guy Bove, says its clientele want “individualistic design in place of many, many gemstones". 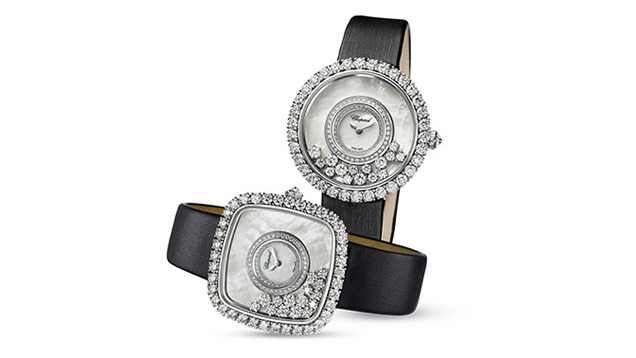 Chopard has revived its Happy Diamonds watch collection, which it introduced more than 40 years ago. Depending on the model, the watch contains 4-14 colourless, 5 mm round brilliant diamonds that float inside the watch dial. Photo courtesy of Chopard

The company developed several diamond watch lines, including reviving its 40-year-old "Happy Diamonds" watch line, where the emphasis is on setting diamonds within striking designs “to show them well”. In the woman’s watch, 14 5 mm round brilliant diamonds placed under the watch crystal float around the mother-of-pearl dial. The man’s version uses four floating diamonds.

Chopard has not let the gem-studded watch concept go just yet. It displayed an ingenious, albeit extremely difficult, Imperiale Joaillerie timepiece made from 581 sapphires of different colours that subtly graduate to create the full spectrum of colour around the dial, bezel and watch band.

Luxury watches are not only about gemstones. A number of watch brands are divisions of large conglomerates, such as Richemont and Louis Vuitton, Moët Hennessy (LVMH), which spend million of dollars on marketing and maintaining brand integrity. Indeed, their brand presence at the Baselworld Fair is a case in point: they display their timepieces in multi-story spaces the size of a city shop. Inside these structures, a mix of elegance and technology is meant to impress the 100,000 or so tourists and buyers who visit the show each year.

“Brands are very powerful with watches. Much more so than high-end jewellery,” explains Mouawad, who notes that some models can top $1 million (£690,000) even without being set with many carats of diamonds and other gemstones. The cost is a result of the design and workmanship – most high-end luxury watches have extremely complex analogue movements that, beyond keeping time, follow the cycles of the moon. They also include calendars and sports functions, such as a stop-watch. 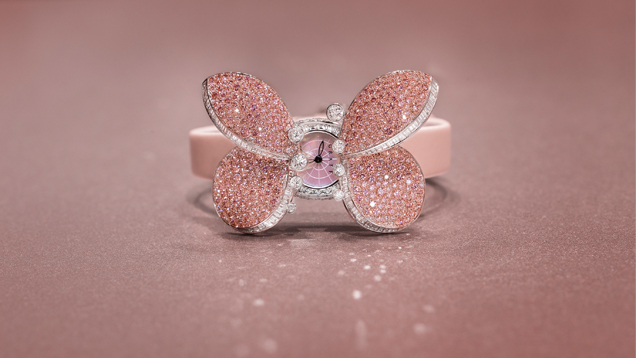 Graff has remained in the bling game with the Pink Princess Butterfly watch, which contains 25 carats of fancy pink colour pear-shaped diamonds. The butterfly wings open to reveal the secret dial. Photo courtesy of Graff

Mouawad notes that demand for high-end watches in China is shifting towards more complex movements and limited edition collectors’ pieces. In the Middle East, he adds, buyers still want jewelled watches, but the realities of today’s economy have trimmed demand. Although the U.S. is still a growth market, consumers there, like those in other markets around the world, are opting for more distinctively designed pieces with collector appeal.

Find out what it takes to make
an NBA championship ring, the ultimate status symbol for professional basketball players.

Collectors from around the world descended on Christie's auction of Al-Thani Collection jewels.